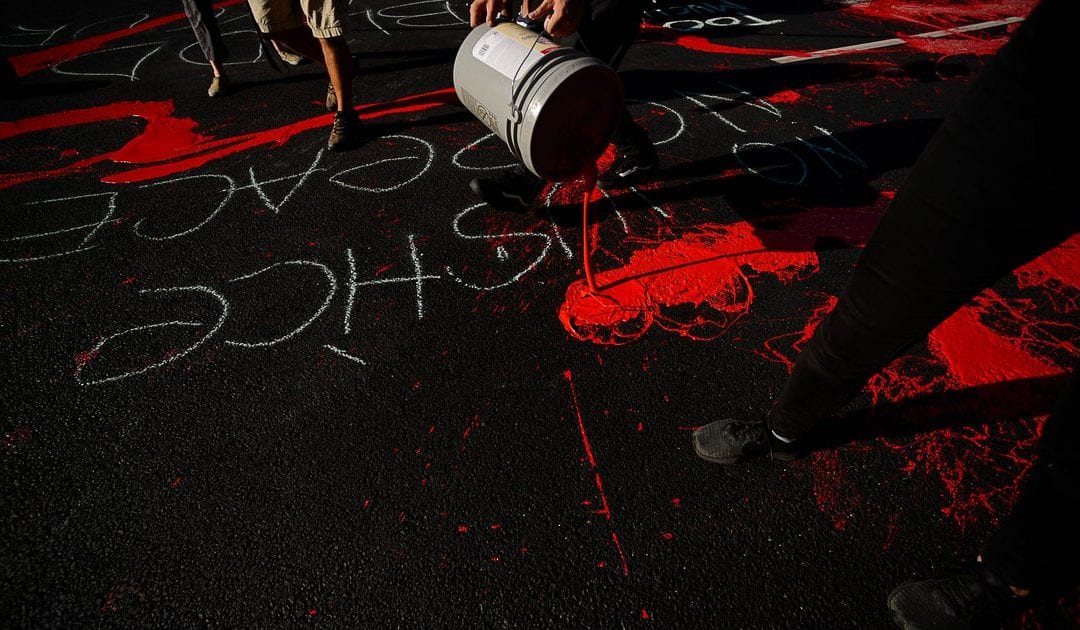 Salt Lake County prosecutors have charged three more protesters for allegedly painting the road outside of the district attorney’s downtown Salt Lake City office and its facade red during a demonstration in early July.

Viviane Turman, 23, and Michelle Mower and Madison Alleman, both 25, were charged Tuesday with first-degree felony counts of criminal mischief and third-degree felony counts of rioting. Court documents allege Turman and Alleman dumped 5-gallon buckets of paint on the road and splashed it on the building, at one point dipping their hands in the paint and leaving handprints on the building.

Mower, who was injured the night of the demonstration by an officer shooting a beanbag gun, is accused of painting concrete near the entrance of the office. She was also charged with a misdemeanor count for allegedly kicking an officer.

These are the most recent charged in connection with a July 9 demonstration, where protesters against police violence came together to rally against District Attorney Sim Gill’s decision to not charge Salt Lake City officers for fatally shooting 22-year-old Bernardo Palacios-Carbajal in May.

Some attendees used metal pipes to break four windows outside of the office, while others spread paint outside. Police have said five windows were broken, but charging documents only note four.

Salt Lake City Police officers in riot gear had mobilized around the event and moved in on demonstrators after the windows were broken. Two protesters, including Mower, required treatment at a hospital, and many reported minor injuries after police charged at or used less-than-lethal force on protesters. One SLCPD officers was injured and treated at a hospital.

Prosecutors had previously charged Justice for Bernardo — the group that held near-nightly protests for accountability in Palacios-Carbajal’s death — organizers Sofia Alcalá and Emanuel Hill in connection with that protest. They also face felony-level criminal mischief and rioting charges.

During a July 14 interview on Trib Talk, Gill said that his team was looking into conflicts of interest if he filed charges against protesters accused of damaging his office.

“If there’s a conflict, absolutely we will not be doing it,” Gill said, “and I can see that there most likely will be a conflict on some of those individuals.”

The office said Thursday that it was in the process of finding outside counsel for cases where there’s a conflict.