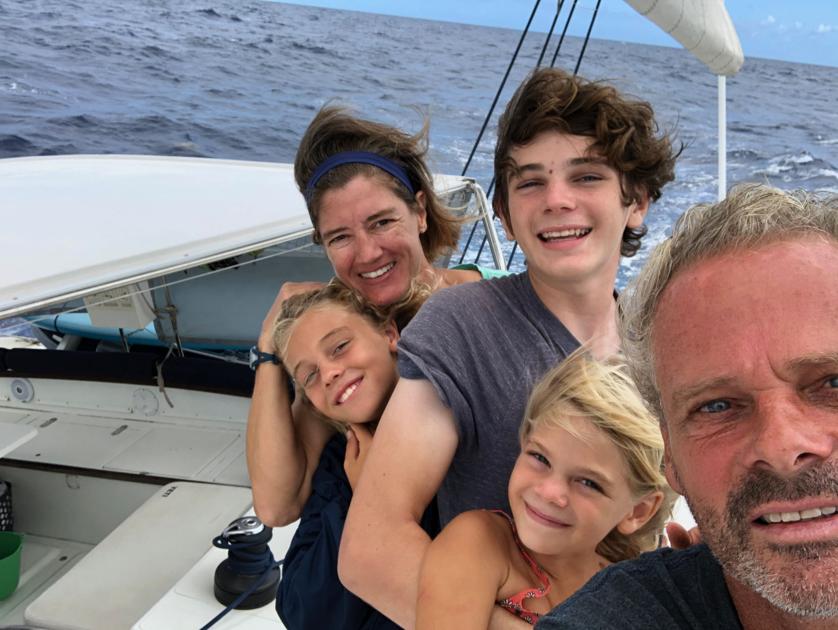 By the time they sailed away from Brazil, the Grosjeans were about 130 miles from their goal of circumnavigating the globe.

“When we left Brazil, pretty much the world was normal,” recalled Lara Grosjean, who along with her husband, Joe, are beloved in Colorado Springs for their downtown climbing gym CityROCK.

“And then by the time we landed in Grenada, people were standing 6 feet apart and wearing face masks. Grenada had shut down.”

So there the family stayed for much of March and April, the parents and their three young kids only leaving their docked boat to swim around it.

“Actually,” added Lara, “what we’ve been saying is, those of us who live on boats are kind of uniquely qualified to handle this pandemic and isolation. It’s what we do.”

It’s what they’ve been doing for the better part of four years. What had been a lifelong dream of Joe’s — he grew up in Portland, Ore., sailing and obsessing over old adventure tales — had become an idea to make the kids’ lives richer. Cobin was 10 when they left the Springs in 2017. Sisters Marin and Tully were 6 and 3, respectively.

“It originally was about me wanting to do it since I was 10,” Joe said. “But we soon as parents figured out, if we get our kids together and sail around the world, their world will be bigger than most kids their age and they’ll be able to make better choices in life later.”

After lockdown in Grenada, the Grosjeans last week crossed their wake near the Caribbean island of Saint Lucia. A line on a map tracking their voyage spanned three major oceans, 33 countries and territories, and represented approximately 50,000 miles.

Charm, their 55-foot catamaran, had lived up to the name. And from their temporary base in the U.S. Virgin Islands, the Grosjeans reflected on the journey of a lifetime.

They were in no rush to get home. Adjustment to life on land would be a challenge, they expected — no less with life on land altered by COVID-19.

Then again, they felt uniquely qualified. “We have a skill set we’ve built up over the past three to four years that we can definitely deploy at this particular time,” Lara said. “The kids get it. Everything this whole time was built around surviving the unexpected.”

The unexpected, such as the call from Australian friends who were stranded on the notorious Indian Ocean, 1,600 miles from their destination. The Grosjeans sprung to action, rushing Charm to their aid.

The unexpected, such as the rough passage through the Cape of Good Hope, the rocky promontory approaching Cape Town, South Africa. The autopilot had died. Joe held firm to the wheel while fierce winds damaged the mast. Lara roped up to fix the issue. Cobin belayed her while the girls looked on in a perilous moment.

The unexpected, such as the even fiercer winds off the coast of the Dominican Republic. Worsening the ordeal was Joe’s lingering illness. The kids knew the waves as “plate crashers,” and that’s what these waves did — crashed and shattered plates in the cupboards.

There were no snow days, but there were “wave days,” when Lara called off home schooling. There were taco Tuesdays and pizza Fridays. There was entertainment from iPads, but mostly the kids looked forward to whatever surprise awaited them at their next stop.

There was scuba diving from the Galapagos Islands. There was sledding down a volcano. There was hiking up another volcano in Indonesia; Marin very much wanted to camp at the top. Little Tully, meanwhile, was always on the lookout for new animals. “Dolphins were probably our most regular creature,” she said.

And they all looked forward to the celebration at the end, when family and friends were to greet them in Saint Lucia.

It didn’t work out that way. The coronavirus had changed things.

But by then, the Grosjeans were used to the unexpected.

“Adaptability. That’s one of the big things we’ve learned,” Lara said. “When things wouldn’t pan out the way they were supposed to, (the kids) wouldn’t cry. It was just what happened. Things are always changing; that’s what they’ve learned as well. They just roll with the punches.”