The Colorado River is facing a water shortage because of climate change, politics, and short-sightedness. 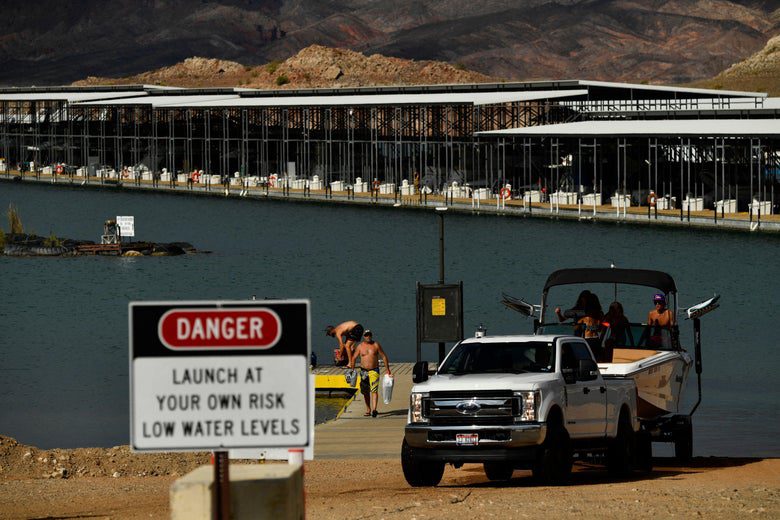 On Aug. 16, the Bureau of Reclamation, a federal agency that is part of the Interior Department, held a press conference announcing that for the first time in the 99 years of governmental record-keeping, it was declaring a water shortage on the Colorado River. Starting in January 2022, farmers, ranchers, and irrigation districts will be forced to use less water, which will hit Arizona particularly hard.

The shortage is a product of climate change—extended drought, wildfires, extreme temperatures, flooding and landslides all plague the ecosystem—but also human stubbornness regarding the politics of dividing up the water from the Colorado River. Despite a waning flow of water and populations becoming more and more concentrated in cities, the legal framework for sharing the Colorado River hasn’t fundamentally changed since it was first written nearly 100 years ago.

On Friday’s episode of What Next: TBD, I spoke with Abrahm Lustgarten, a senior investigative reporter at ProPublica, about how we got here and whether there’s a path forward out of this emergency.

Lizzie O’Leary: For people who’ve been watching the Colorado for years, like you, this shortage was entirely predictable. Do you ever feel like Cassandra?

Abrahm Lustgarten: I like to try to look around corners a little bit with what I’m hearing from the climate community and the environment community, and yeah, I get a bad rap for being the bearer of bad news. On one hand, climate change’s impacts on the river are surprising: They’re coming faster, and they’re having greater impact than some people expected. But on the other hand, the river has been in trouble for a long, long time, and that’s not a surprise to the people that watch it closely.

It’s a 1,400-mile-long system. It goes from high in the Rocky Mountains in Colorado, all the way down to the Gulf of California and Mexico. The iconic images are the big dams, the Hoover Dam and Lake Mead outside of Las Vegas, and the Glen Canyon Dam and Lake Powell in Northern Arizona. Those are just desert landscapes of red rocks and cliffs lining this immense pool of water. But in Colorado, the river there is a raging clear stream full of trout running through high mountains with snow melt running into it through gorgeous meadows of green grasses. It’s really that idyllic cliche of a big, wild river.

Forty million Americans, give or take, depend on water from the Colorado River. But that water is also used to irrigate farms that provide an incredible proportion of the fruits and vegetables that get shipped around the country, as well as feed for the cattle that is a really substantial portion of the meat consumed by Americans. In addition to that, the water is routed outside of the Colorado River basin to the city of Phoenix, the cities of Los Angeles and San Diego and Denver, none of which are in the natural geography of the Colorado River.

I want to back up a little bit and understand the foundations that were laid, frankly, a hundred years ago, for some of where we ended up now. What was/is the legal framework for how the water should be used?

There are layers of laws that cover how the river is divided up, but the fundamental and top layer is an agreement between the seven states that share the Colorado River. In this 1922 compact, they essentially used what data they had—which was really limited—to calculate how much water they thought would be flowing through the Colorado River on average, and took that amount and divided it proportionally amongst the seven of them.

Yes. So they divided amongst them, not equally, but proportional to what they each agreed was their relative claim on the river and they proceeded forward for the next hundred years, never really changing that amount even as the data improved. And you could see over a greater period of time that the river’s flow was actually substantially less.

That’s one of the things that is so head-scratching to me: This agreement was drawn up in 1922 and it hasn’t really been changed.

The 1922 compact overestimated how much water was in the river system to begin with. And now there’s even less. On top of that, the rules about divvying up the water—whether you’re a city, an irrigation district, or a rancher—essentially operate like dibs or calling shotgun in a car.

Why has this frontier mindset survived to 2021 in the way we think about and legislate water?

Part of it is cultural. The culture of the West survives. In the north, in the mountains, it’s a culture of rugged individualism, and in the south, it is still a bit individualistic and conservative. The rights to the water track to the history of the place, not to how it has evolved in more modern times. [These] cities didn’t exist in the mid-1800s, so they have very junior water rights now, even though that’s where most of the people are. So literally the largest volume of water goes to the people in places with the deepest historical roots.

Add to that unprecedented drought for two decades, plus losing water to evaporation and leaky old infrastructure. It doesn’t look like the shortage the government declared last month is going away anytime soon.

The shortage declaration in August also came with a forecast for what the federal Bureau of Reclamation expects the future water levels to be. They forecast a significant possibility of very, very severe shortages and further drops in Lake Mead by the middle of 2023. That would force an entirely new negotiation that would basically put the river system outside of the sphere that the seven states have so far considered. A new paradigm of shortage, if you will. And it’s really unclear what happens next.

What are the negotiations between the different states and stakeholders potentially going to look like? Who has the most power in these negotiations?

California is a huge player. It uses something like a third of the river, and it uses most of its water rights to grow those fruits and vegetables in southern California, in the Imperial Valley. For a lot of really complicated reasons, and partially because California is that entity that holds the most leverage and the most power, California has largely shielded itself from some of the cutbacks that we’re starting to see now. It’s done that historically, and it’s managed to perpetuate that into the present moment. That makes California a real powerhouse going into negotiations going forward, but it also puts California in the cross hairs. Nevada, Arizona, and the upper basin northern states have all made really significant sacrifices. They’ve bled, so to speak, through these processes. I think that they all hope and believe that it’s time for California to feel more of the pain. So a lot of these future discussions, I think, are really going to focus on California.

Are there incentives for these seven states and the cities there to work together, or are there just power struggles?

It’s a little bit of both. The incentive to work together is that should any one party completely decimate this resource, all parties lose out. Everybody needs the water and they have a mutual, beneficial interest in preserving that water. But ultimately these are separate power centers with their separate individual constituencies that they have to serve.

That’s what the Las Vegas example tells us. The water levels of Lake Mead are dropping, and as they drop past certain thresholds, the river and the infrastructure there will no longer be able to provide water and power to all of the people who share that resource. But Las Vegas basically said, Should that ever happen, we’re going to have another way out, and they built what amounts to a drain hole in the bottom of the lake. They built their own pipeline that comes in at a lower level and gives the city of Las Vegas a way to continue to remove water only for itself from Lake Mead, should it no longer be able to flow to Arizona and California downstream.

Because of how much water is used to grow alfalfa to feed cattle to provide meat, the research suggests that if Americans stopped eating meat just one day a week, that alone would translate to a savings of water equivalent to the entire flow of the river. Were that ever to happen, that would solve the West’s water problems in its entirety for a long time to come.

As someone who’s been reporting on this for a long time, do you ever feel hopeful or do you just feel depressed?

I report on all things climate, and it becomes difficult to separate the water scarcity issues in the Colorado River basin from water scarcity issues across the country from all of the other really significant impacts of climate change. In the big picture, it’s hard to stay hopeful. But when you drill down into specific issues, I think there’s lots to be done that can still make a big difference. I look at the Colorado River basin and there’s a lot of water still to work with, and there’s so much inefficiency. There is an enormous opportunity to recalibrate how that water is used and make it last a whole lot longer without having the devastating impacts on people’s lives in that region that many people are afraid of now.