The city’s hospitals are short on masks. Brooklyn’s artists are here to help. 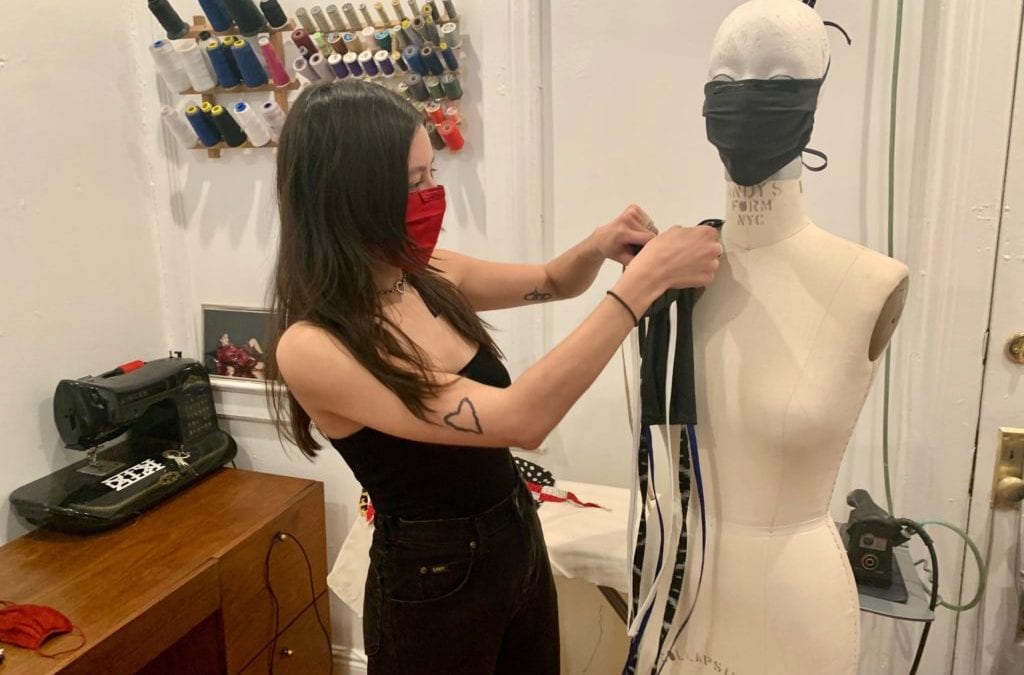 Helena Eisenhart had lined up her career plans and was readying herself for a productive spring.

The 27-year-old fashion designer had just been promoted to a full-time assistant job at a womenswear brand, and as money started to trickle into her bank account, Eisenhart planned to spend nights and weekends stitching her personal collection together.

Then, the pandemic happened. Eisenhart’s company laid its staff off on March 19, and the next day, looking at her clothing sketches, she realized something.

DAILY TOP BROOKLYN NEWS
News for those who live, work and play in Brooklyn and beyond

“I was like, ‘Oh, I don’t need to make this collection. This collection is really for nobody except for myself and doesn’t really help anyone,’” said Eisenhart, who lives in Bushwick. “It just seemed selfish and frivolous to even do it anymore, as much as I wanted to.”

So, she began making masks.

Eisenhart is part of a legion of Brooklyn residents who are scrounging cotton fabric from t-shirts and scraps to be cut, measured and sewn into face masks for delivery and healthcare workers as the coronavirus tears through New York.

Since the pandemic’s beginning, the and the have advised the public against wearing masks unless they are sick, mainly to conserve protective wear for healthcare workers.

While , New York continues to face a .

The CDC has stated that homemade masks are acceptable only as a “,” but with the recommended N95 masks next to impossible to purchase, nurses and doctors across Brooklyn have few alternatives. Some hospital workers in Southern Brooklyn have said they are allotted , and Mayor Bill de Blasio said yesterday the city will need .

Fabric masks don’t form an airtight seal around the face like commercial N95 masks. Still, studies have shown that a layer of cotton offers better protection than nothing, so crafty people like Eisenhart are stepping up to make the next-best thing.

Eisenhart collects her own fabric to make and distribute homemade masks at a small scale to neighbors, while other mask-makers have formed networks, with roles divided between delivery, cutting and sewing duties.

At the center of one such mask-making army is Josana Blue, an artist and curator who’s lived in Bushwick for 14 years.

When Blue was asked by a friend on March 19 to make masks for nurses at Wyckoff Heights Medical Center, she said she jumped at the opportunity.

“I didn’t think anything of it,” said Blue, who taught herself to sew when she was a teenager, tailoring hand-me-downs from her four older brothers.

She read tips on what fabrics to use online from a woman making masks in Colorado and acquired a pattern from a friend who designs masks for fashion brands. After finishing her first order of 30 masks, she started a Facebook group, “Josi and the Riveters,” and began enlisting others to help through social media.

Within a week, Blue was at the center of a mask-making beehive.

As an intermediary, she acts as a go-between for supply messengers, leads a troop of seamstresses and tailors, and assembles fabric bundles for prospective volunteers across Bushwick, handing the bundles off herself in front of her apartment while wearing a mask and gloves, or deploying them through cyclists in the neighborhood.

“I had a girl randomly who was like, ‘I don’t know, I can’t do anything,’” said Blue. “So I was like, ‘Can you use scissors? Then come on over, get this fabric, and go cut these.’”

As of Monday, she said she’s sewn around 100 masks, delivered 20 fabric bundles, and donated 260 masks combined to Mount Sinai West and Wyckoff Heights Medical Center, in addition to 40 masks for traveling elder-care workers. She expects to donate hundreds more.

The whole experience has reminded Blue of when she first moved to New York, the night before the terrorist attacks on September 11, 2001.

“I feel like it’s the same circumstance now. Everybody is just unified, you know? Everybody wants everyone to be stronger together,” she said.

Among the volunteers in Blue’s orbit is Kyle McMahon, a Bushwick-based freelance artist who painted scenery for shows like “Saturday Night Live” and HBO’s “The Gilded Age” before she was laid off, when the city’s film and television industry suddenly halted productions.

McMahon learned about Blue’s mask-making enterprise through , a grassroots volunteer group she joined after reading about it on a flier in a neighborhood coffee shop.

A Bernie Sanders supporter, McMahon said she considered sewing and donating masks to be, for her, “an opportunity to practice what I preach.” Since March 21, she’s constructed around 250 masks.

Her motives are also personal. Several of her family members are doctors and nurses, McMahon said, and she feels a “sense of helplessness” toward their risk of contracting COVID-19.

“What if one of my family members, who I love so much, becomes ill doing their job trying to protect people? And you know, what if they die? What if I can’t go to a funeral to say goodbye?” McMahon said. “Obviously these masks aren’t going directly to my aunts, but they are going to somebody.”

Before the pandemic, McMahon painted art installations for House of Yes, a Bushwick nightclub known for its flamboyant, highly-costumed performance shows. According to McMahon, the nightclub’s founders donated the bulk of their excess fabric and elastic to mask-makers in the neighborhood.

While some of her masks are going to hospital workers, via Blue, McMahon also donates masks to restaurant cooks, delivery workers and “anyone who needs them.”

“I would be completely fine just putting them in a box outside of my apartment and being like, ‘take one for free,’ as long as nobody is re-selling them,” she said.

Blue said she’s aware that homemade fabric masks are not the ideal form of protection against COVID-19, but she believes that they’re better than nothing in a pinch.

And we are in a pinch, Blue said.

“Look where we live in America, in New York City. We have all the resources, all the manufacturers, all the money in the world, right? So, where are the masks?” she said.

“Why is there a backup, and why are we becoming the first in line to make and distribute these masks?” she said. “That’s what’s so perplexing about this scenario. It doesn’t make any sense.”