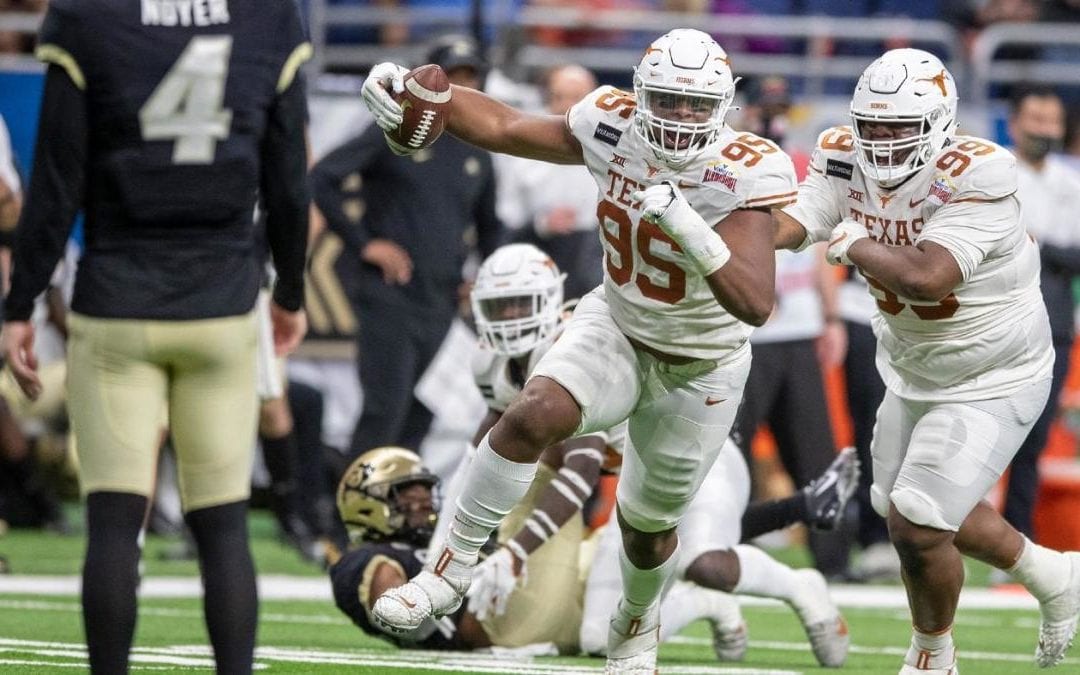 Texas quarterback Sam Ehlinger’s evening was cut short in the Alamo Bowl. Now the question is whether his collegiate career is over, too.

The senior did not suit up for the second half of Tuesday’s 55-23 rout over Colorado because of a shoulder injury he suffered in the first half. Ehlinger was seen in street clothes and a sling after halftime. Though Ehlinger did take a couple of sacks, he had a solid first half with 160 yards passing and a touchdown.

The attention now turns to Ehlinger’s future. Because of the NCAA’s decision to grant fall sport athletes an extra year of eligibility due to COVID-19, it’s possible Ehlinger could return to Texas in 2021. While Ehlinger took part in pregame senior day ceremonies before the Iowa State game in November, he’s never explicitly stated that he’s for sure moving on to the NFL after this season. There is a hint of unfinished business. Texas fell short on expectations to win the Big 12 and losing to Oklahoma always stings. Ehlinger is also the program’s second-leading career passer with 11,436 yards and 94 touchdowns. If he comes back for one more season, he would surely break the schools’ career passing and touchdown records set by Colt McCoy.

If this is it for Ehlinger, it would be a tough way to go out. He’s the best quarterback the program has had in a decade and his story as a lifelong Horns fan growing up in the school’s backyard is well-documented. Still, it would be surprising if he came back for another year. He’s not considered a high draft pick, but even though this is a loaded quarterback class, it’s unlikely he’ll significantly enhance his draft stock with another year in college. And based on the way redshirt sophomore Casey Thompson slung the football in the second half … well … it just might be time to move on. Thompson played possessed, going 8-of-10 passing for 170 yards and four touchdowns, tying an Alamo Bowl record for the most scores.

He wasn’t alone as the star of the game. Freshman running Bijan Robinson had 183 yards on just 10 carries and racked up three total touchdowns. Robinson has been a late bloomer in part because Texas has insisted that he be a part of a running back rotation for most of the year. To be fair, Roschon Johnson has earned his carries and scored one of the best rushing touchdowns you’ll see this season against the Buffaloes. But it’s been clear for weeks now that Robinson is that dude and in his past two games he has six touchdowns on 24 touches at 15 yards per touch. His combination of lower body strength and balance makes him a difficult back to bring down.

Robinson wasn’t the only freshman to turn heads. Defensive lineman Alfred Collins had a ridiculous one-handed interception that showed off tremendous athleticism:

We’re in the Matrix 🤯 pic.twitter.com/gqXvHoDJ2c

Texas set school bowl records for points (55) and yards (638) while playing largely with young players and backups. I’m not here to sell you on Texas being “back” in 2021 — Colorado was down basically half its team — but while Ehlinger has been the face of the program, the future looks awfully fun, too.