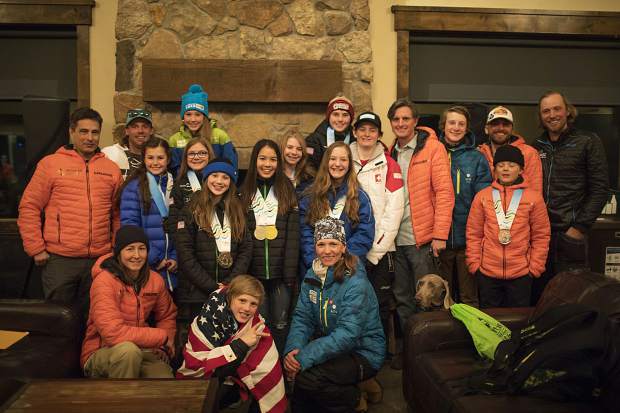 “Eagles were meant to fly, and so was Nina Schamberger.”

That was Rodney Robinson’s favorite quote from last week’s International Children’s Games at Lake Placid. It was delivered in a thick British accent by the event’s emcee, Stuart Hemsley, as he called the finish of one of Summit Nordic Ski Club athlete Schamberger’s gold-medal wins.

Robinson, Team Summit’s director of development, shared this moment on Tuesday at the Frisco Adventure Park Day Lodge, when the community welcomed the young athletes back from New York.

With her two gold medals and a bronze, Schamberger, a 13-year-old from Leadville, was certainly one of the stars of the International Olympic Committee-sanctioned event for 12- to 15-year-olds. But during Team Frisco’s celebratory event on Tuesday, Robinson stressed the group’s 15 total medals from its 12 athletes underscored the strength of the entire team.

“It was always all about the kids,” Robinson said. “When we talked about calling back home to talk to the media and stuff, they said, ‘we don’t want to do two or three at a time. We are one team. And we want to do it together.”

At the adventure park this week, Team Frisco, an assortment of Team Summit and Summit Nordic Ski Club athletes, stood together as one.

“Watching this group come together was something that far exceeded any of our expectations,” Robinson said.

The Team Frisco athletes brought with them their 15 medals from the games. That tally was the second-highest mark for any of the event’s 33 teams, only behind the host, Lake Placid, which fielded 80-plus athletes to win 18 medals.

The team also brought the ski jackets and hats they traded with other international cities that competed at the games.

Then, after receiving gifts on Tuesday from the town of Frisco and Mayor Gary Wilkinson, the team lined up together to answer questions. At the head of the group was Summit Nordic skier Nico Konecny, who wore the same full-size American flag he sported through much of last week in Lake Placid.

Konecny was the first athlete an audience member asked the following question: “Would you like to compete in the Olympics one day?”

One by one, all 12 Team Frisco athletes expressed their dreams to compete in the Olympics, whether that be in Nordic skiing, snowboard slopestyle or ski cross.

Wilkinson also asked the group if Frisco should send a Summit County team to the next International Children’s Games, slated for 2021 in South Korea. In unison, the young athletes all responded alike.