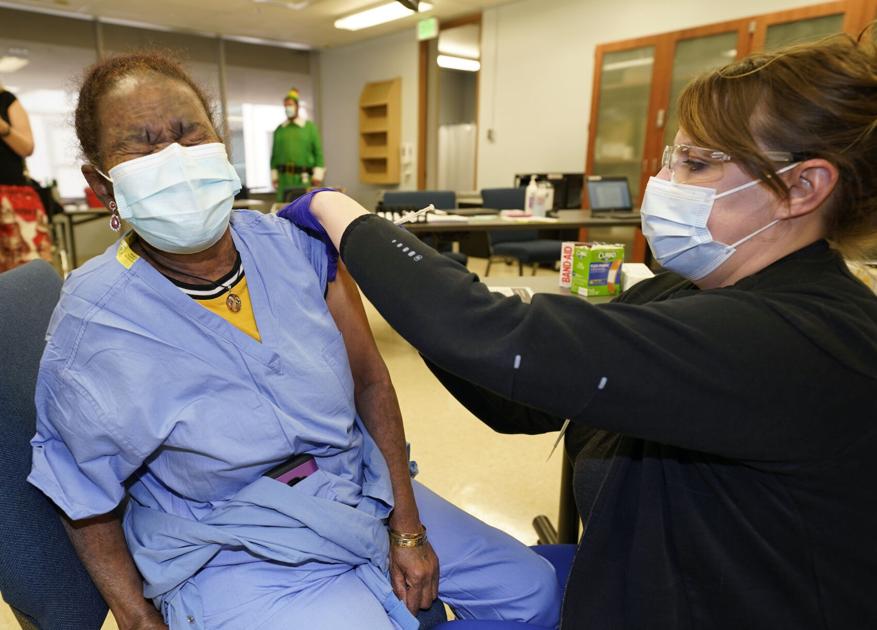 Colorado voters are sharply divided along partisan lines on nearly every aspect of the year-old coronavirus pandemic — including how concern over COVID-19 has affected their mental state, whether they plan to get vaccinated and how state government should respond to the public health and economic crisis, according to results of a statewide survey of registered voters released Friday.
While two-thirds of Colorado voters say their mental health has suffered due to stress or worry about the pandemic, and a slightly smaller share fear that they or a family member could become infected with the virus, Democrats cited an impact on their mental health and concern about infection far more than Republicans, for instance.

The survey, conducted Feb. 9-17 by Louisville-based GOP firm Magellan Strategies, found that a majority of Coloradans who haven’t yet been vaccinated — 55% — intend to get vaccinated once it’s available, though more than three times as many Democrats plan to get vaccinated than Republicans, a disparity that could lead to a challenge reaching herd immunity statewide as inoculations ramp up in coming months.

According to the poll, 55% of all registered voters say they’ll get vaccinated, and 34% say they won’t, with 9% undecided and 2% refusing to say.

In a separate question, 42% of respondents said they or someone in their family had already received the first or second dose of the coronavirus vaccine, with 55% saying they hadn’t. Those who answered this question affirmatively weren’t asked about their vaccination intentions.

Colorado voters overall are much happier with how President Joe Biden is handling the pandemic, compared to the job former President Donald Trump did, though the two parties’ assessment of the federal response presented almost mirror images of each other.

There’s strong disagreement along party lines, though, with 83% of Democrats assessing the Biden administration’s response to the pandemic positively and just 18% of Republicans giving the same answer.

Colorado’s suburban and rural voters also come to opposite conclusions, the survey found, with suburbanites backing Biden’s response 57%-32%, and rural voters disapproving 32%-59%. According to Magellan’s data, suburban voters make up 42% of the Colorado electorate, far more than their rural counterparts’ 11% share.

Most Colorado voters approve of how Gov. Jared Polis is handling the pandemic. Among all voters, 56% think the Democrat is doing a good job and 37% don’t, with 7% unsure. Polis does slightly worse with Democrats and better with Republicans than Biden, with Democrats saying 79%-14% that they approve of his response, and Republicans splitting 28%-65% with favorable response to Polis’ approach.

A plurality of voters think the state is heading in the right direction, with 47% agreeing with that statement and 37% saying Colorado is headed in the wrong direction and the remaining 16% unsure or holding no opinion. As expected, various demographics stake out wildly different positions on the question, with 85% of Democrats who belong to Generation X saying they’re happy with the way the state is headed but just 12% of Republicans of the same age cohort saying the same.

By an overwhelming margin, voters say they want Polis and the state legislature to address problems involving the pandemic, with 24% naming jobs and the economy as their top priority, 20% saying it’s the vaccine rollout, 17% describing the coronavirus in more general terms and 16% telling the pollsters opening businesses should be state government’s top concern.

There are some big differences in priorities by party affiliation, though.

Democrats are more likely to point to vaccinations and the pandemic as their most important issues, with 71% saying one of those topics should top state officials’ lists. Republicans, on the other hand, tilt far more toward the economy and opening up businesses, with 58% saying one of those.

While a good share of those who said they aren’t going to get vaccinated said it’s because they’ve already had COVID, most of the Republicans said they are leery of receiving an untested vaccine that was brought to market so quickly, with some saying they’ll consider getting inoculated once more tests have been performed. Others dismissed the virus as no more dangerous than the flu or the common cold, despite a significantly higher fatality rate.

The survey, including cross-tabs and verbatim responses to some open-ended questions, is available online here.