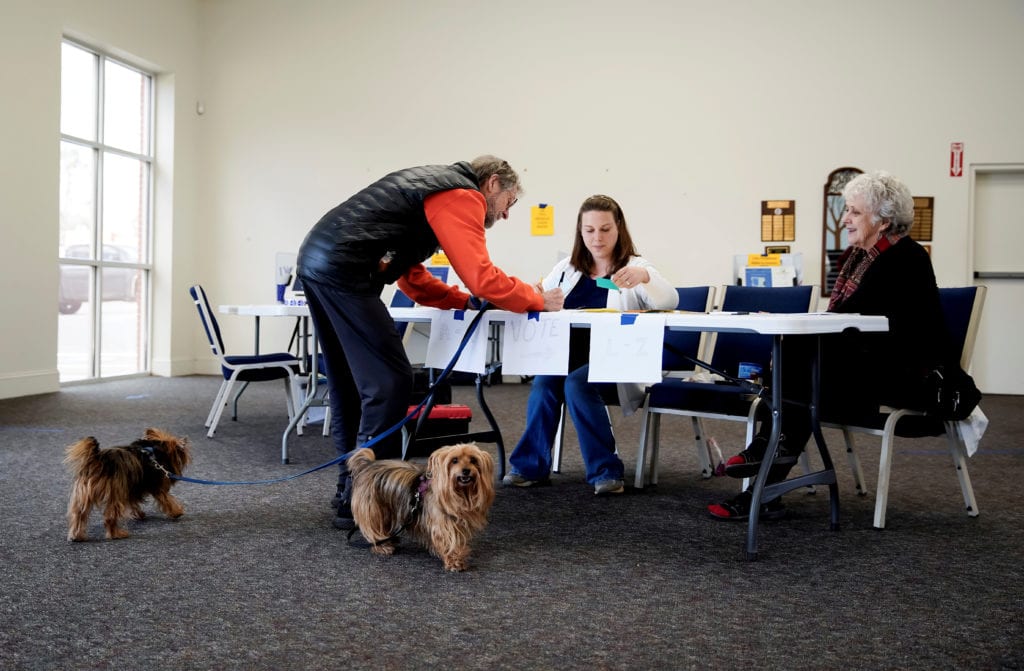 BURNSVILLE, Minn. — Nearly two years after suburbanites helped drive a Democratic surge, there are clear signs these voters are engaged and primed to vote Democratic again.

Turnout in the Democratic presidential primary has been strong across suburban counties, from northern Virginia to Southern California, that fueled the 2018 wave. In several key counties, turnout has exceeded that of four years ago. In some cases, it has bested the party’s recent high water marks reached during the 2008 primary battle between Barack Obama and Hillary Clinton.

That has been particularly good news now for Joe Biden. The former vice president, who’s running as a moderate, consensus candidate, soared to the top of the Democratic field this past week, showing strength in places such as Fairfax County in Virginia, and Mecklenburg County in North Carolina. Many suburban Democrats said they are motivated by their desire to oust Trump and a fear that Vermont Sen. Bernie Sanders, Biden’s chief primary rival, is a riskier bet.

“My main goal is to not have Trump get reelected,” Gail Hayes, a 67-year-old retired child care provider, said outside a coffee shop in Burnsville, Minnesota, a Twin Cities suburb.

Hayes noted that she’s ideologically more aligned with progressives such as Sanders or Elizabeth Warren, the Massachusetts senator who dropped out of the race Thursday. But Hayes described herself as pragmatic and said she voted for Biden because she thinks he can win.

“I wanted to pick someone more moderate,” she said. “I really didn’t decide until a couple hours before I voted.”

The Democratic turnout overall has risen, with Iowa, North Carolina and Texas topping 2016 levels, but not the 2008 spike. Virginia was an exception, jumping from 986,000 votes in 2008 to 1.3 million.

Much of that increase is coming in American suburbs that will be pivotal to the November general election.

Consider Burnsville, part of once-reliably Republican Dakota County. The sprawling community has grown more racially diverse and more Democratic in recent years. The strip mall where Hayes grabbed a coffee also housed a halal grocer linked with an African restaurant and a Latin grocer linked with a taco shop.

A surge of anti-Trump sentiment in the area helped Democrats flip a Republican-held House seat in 2018. Now Dakota County is among the places Trump’s campaign must pick up ground if it wants to make good on its promise to win Minnesota in November.

“The suburbs have been a killing zone for Republicans in the Trump era,” said GOP strategist Alex Conant, a top adviser on Florida Sen. Marco Rubio’s failed 2016 presidential campaign. Conant said Republicans must do better to attract young families and professionals or Democratic gains in suburbs will almost certainly continue.

The opening contests of the Democratic presidential primary, including 14 held Tuesday, brought few signs that the Trump backlash in the suburbs has ebbed. In a dozen counties with swing suburban communities, Democrats cast more ballots than they did four years ago, an analysis found. In nine of the 12 counties, the vote totals eclipsed 2008.

The numbers are a sign of both the energy and the population growth driving Democrats’ suburban strength. Both were evident last Tuesday in Virginia, where Democrats have won three straight election cycles since Trump was elected, powered largely by voters in suburban areas. That success includes every statewide race and flipping partisan control of the Legislature and congressional delegation.

In Chesterfield County, just south of Richmond, young families have flocked to new subdivisions, shifting the area’s politics at a stunning pace. The county voted for Trump in 2016 but has since helped elect Democratic Gov. Ralph Northam in 2017, sent Democrat Abigail Spanberger to Congress in 2018, and seated a new Democratic state senator in 2019. This past Tuesday, 25,000 more Democrats voted compared with the Democratic primary in 2016.

Voting was up for Democrats in Texas’ Dallas County, another area that flipped a House seat to Democrats in 2018, though turnout was not as high as when Obama was on the ballot.

In Virginia, about two-thirds of suburban voters describe themselves as moderate or conservative, rather than liberal, as do about 60% of suburban voters in California, Colorado, Minnesota, North Carolina and Texas, according to AP VoteCast surveys of voters in eight states that held primaries last Tuesday.

That moderate tilt proved to be an advantage for Biden over Sanders, whom many suburban voters said they viewed as less likely to beat Trump. Biden soundly beat Sanders in Dakota County, Chesterfield County and Fairfax. In California, a state Sanders won, he beat Biden in suburban havens of Orange and Riverside counties, although by relatively narrow margins.

Matthew McDade, 62, a Democrat who cast his ballot in Cady, North Carolina, home of the Research Triangle Park area, said he voted for Biden as a matter of pragmatism rather than preference.

“I just felt like he had the best chance of consolidating Democrats behind him and the best chance of beating Trump,” he said. The 40-year resident has watched Wake County swell with out-of-state newcomers filling jobs in the booming pharmaceutical and technology industries and surrounding universities, and making the area “much more cosmopolitan.”

Progressives argue that the party’s focus on the suburbs and its cluster of moderate and older voters risks leaving behind the young voters, Latinos and liberals at the core of Sanders’ coalition.

“A campaign that is not inspiring to a rising American electorate, especially of young voters, can be a real challenge for Democrats,” said Neil Sroka at the pro-Sanders Democracy for America. Democrats’ focus shouldn’t be on the so-called swing voter who shifts between Republicans and Democrats, “but those who swing in and out of the electorate,” he said.

Indeed, Sanders’ supporters stand out for their skepticism of most other candidates in the race. At least half of his voters across eight states surveyed said they would be unhappy with Biden, according to VoteCast.

At the Burnsville coffee shop, Sanders supporter Ali Sugule, 39, wasn’t enthusiastic about Biden. Nevertheless, the Somali American who considers himself a progressive said he “will back up anybody” the Democrats ultimately nominate.

Sherman Bausch, 44, a business technology consultant from Lakeville in Dakota County called Trump a “horrible role model” but said he also would be “very, very frustrated” to have to vote for Sanders.

Outside of Denver, Andrea Staron, 38, said she used to vote Republican. But she left her presidential choice blank in 2016.

On Super Tuesday, the law student who is anti-abortion and deeply interested in anti-poverty work voted on Super Tuesday because she wanted to play a role in choosing an opponent to a president she detests.

Sanders has some “very interesting ideas,” she said, but “I want somebody who can beat Trump.”

She waited until the last minute. And she voted for Biden.