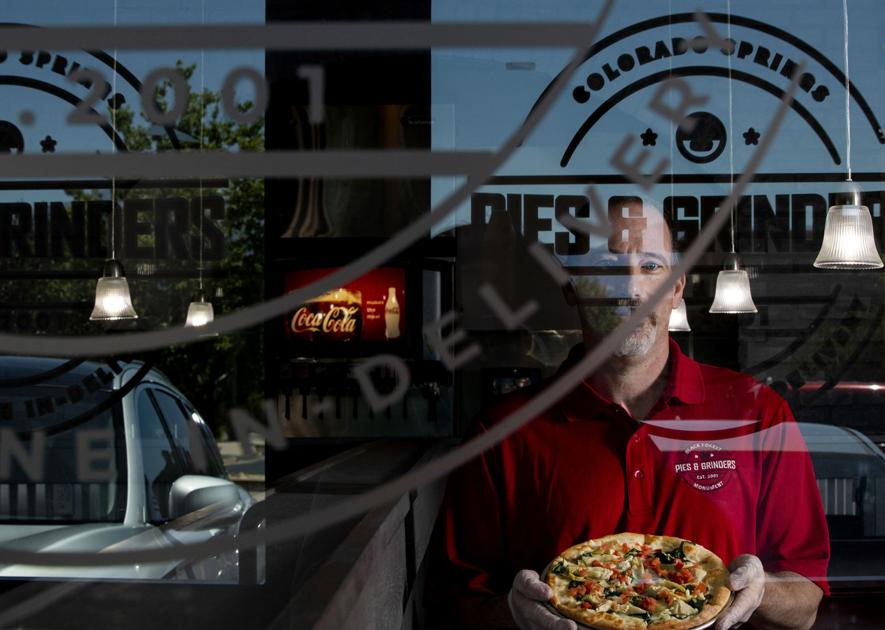 Restaurants and stores already faced their share of worries before the onset of the COVID-19 pandemic in March.

Even amid a robust local economy, Colorado Springs-area restaurants wrestled with minimum-wage increases, rising food costs and a shortage of workers. Brick-and-mortar retailers, meanwhile, sought to keep customers coming in their stores as they battled online rivals and scrambled to pay rents.

Now, with their day-to-day challenges exacerbated by pandemic-induced temporary closings and lost sales, restaurants and stores have been left with agonizing choices.

Can they remain open under current government restrictions and make enough money to stay afloat and even eke out a profit? Or do they decide they can’t overcome financial hardships and health concerns and close their doors for good?

So far, most Colorado Springs-area retailers and restaurants have resumed operating under state guidelines intended to slow the spread of the coronavirus — such as social distancing requirements — and are trying to make a go of it.

Some received loans through the federal Paycheck Protection Program, providing funding to keep workers on their payrolls; a handful of local relief efforts also were launched by Springs-area groups to provide grants and loans to assist businesses.

But several area stores and restaurants have shuttered permanently — and industry experts warn more closings are on the way, whether they’re local retailers, mom-and-pop eateries or outposts of national chains.

“Even with the restaurant closures we’ve had, I don’t think we’ve seen anywhere near the worst of it yet,” said Dan Rodriguez, a vice president and retail specialist with the Colorado Springs office of national real estate firm CBRE.

Kelly Miller said she already was facing stiff competition when she permanently closed her Buzz ‘n Bagels shop in Monument two months ago.

She had opened Buzz ‘n Bagels in December 2018 in a shopping center anchored by Home Depot, Kohl’s and Walmart northeast of Interstate 25 and Baptist Road. The coffeehouse served beverages, bagels and breakfast sandwiches.

Miller, a math teacher who moved to Colorado from California to be close to her daughter attending a local college and after the death four years ago of her husband, designed Buzz ‘n Bagels as a place for area residents to come together.

She decorated a restaurant wall with a wreath that carried the word “gather.” She created a mini-lending library with books that diners could read as they drank coffee; provided Chutes and Ladders and other games for parents and kids to enjoy during breakfast; and set up chairs next to a cozy fireplace where customers could read a newspaper as they ate.

“It really was a community gathering place,” Miller said proudly.

As a sit-down restaurant with room for about 30 people, Buzz ‘n Bagels relied on walk-in customers. But when a Starbucks opened nearby in September, it began to siphon off customers who preferred the coffee giant’s convenient drive-thru, especially on bad-weather days when they didn’t want to get out of their cars, Miller said.

When the pandemic took hold in early March, sales began to plunge and Miller temporarily closed her restaurant by mid-month. Gov. Jared Polis had ordered restaurant dining rooms to cease operations by March 17, although they were allowed to offer curbside, takeout and delivery service.

Miller, however, didn’t attempt takeout or delivery. Early on, she worried about keeping customers and employees safe and closed to avoid health risks, she said.

“My customers, many of them are over the age of 60,” Miller said.

Even after Polis loosened restrictions in early May, which allowed restaurant dining rooms to reopen at 50% of their capacity up to 50 people, Miller decided she couldn’t survive financially with such a limited number of customers and tables.

Unlike many small business people who take out loans, Miller said she had spent her own money to launch Buzz ‘n Bagels. Reopening at half of her dining room capacity would have meant operating at a loss, and she figured she’d have to pump thousands more into the restaurant to pay her employees and rent.

In effect, Miller said, she’d be subsidizing her restaurant just so that she could lose money.

As a result, she never reopened Buzz ‘n Bagels and closed it for good the first week of May. She’s still working with the shopping center owner and hopes it will accept a settlement for the amount she owes on her lease, Miller said. If not, she might have to declare bankruptcy.

“I had to decide at that point if I was going to throw good money after bad,” Miller said. “I thought I’d never go back to full capacity. Because of the kind of business I am, I don’t think people were going to gather like that in the foreseeable future.”

Dining room capacity limits are arguably the biggest factor for restaurants as they determine if they can survive, said Sonia Riggs, president and CEO of the Colorado Restaurant Association. The limits “are untenable for most restaurants, even in the short term,” she said.

“We’re seeing larger restaurants, which might be able to seat 500 people at full capacity, choose to remain temporarily closed or continue only takeout and delivery service with a skeleton crew,” Riggs said. “Restaurants’ financial models are based on full occupancy, and they typically run on razor-thin margins.”

The restaurant industry also is highly regulated when it comes to preventing the spread of disease, and many eateries are going above and beyond what is required by the state to keep employees and customers safe, Riggs said.

Pies & Grinders, whose three locations in Colorado Springs, Monument and Black Forest serve pizzas, sandwiches, calzones and other items, had been offering takeout and delivery service since dining rooms closed in March, said Dan Dreyfuss, co-owner of the restaurants along with his wife, MaiLe.

When restaurants were allowed to reopen their dining rooms two months ago, however, Pies & Grinders kept its closed, though it did open its patios in the Springs and Monument, Dreyfuss said.

He said his biggest worry was ensuring the health of his workers and customers.

He also wasn’t sure if some customers would feel comfortable providing names and phone numbers for contact tracing purposes — allowing health authorities to track who ate at the restaurant in case of an outbreak.

“People feel like you’re being a little invasive when they come in, and I’ve got to get names and phone numbers like that,” Dreyfuss said. “I thought maybe our guests would not like it.”

But, after watching how other restaurants have operated without issues for the most part, and after putting safeguards in place at his restaurants, Dreyfuss reopened his dining rooms July 6.

“It’s hard to run a business being reactionary day by day,” Dreyfuss said. “It’s really not a good business model for any business, let alone a restaurant. But in the world we live in now, we’re kind of in the day-by-day mode. … We have to be reactive instead of proactive at the moment, which I’m not a fan of, but it’s what we have to do in order to keep our business viable and keep people safe.”

Beyond financial pressures and safety issues, restaurants have

routine business matters to deal with, such as whether they can renew a lease at favorable terms, rising unemployment insurance premiums, higher property taxes and the cost to comply with new government regulations.

“All these combined would hurt a restaurant even in a good year, but following COVID-19, these factors could be devastating,” Riggs of the Colorado Restaurant Association said.

Some aging restaurants are especially vulnerable, said John Winsor of The Retail Group, an arm of the Olive Real Estate Group brokerage in Colorado Springs. They often don’t have cash on hand to weather an economic downturn or, in the case of the pandemic, a forced dining room closing.

“One of the first things that always seems to happen in down cycles, you do find out those restaurants, No. 1, that are maybe older and sort of more tired in their concepts, and probably were just making it in a good market,” Winsor said.

“But as things turn, they clearly don’t have the reserves to fund that,” he said. “So that becomes sort of a forced decision, if they simply don’t have the money to continue to operate. A down cycle just exposes that.”

Restaurants also have to worry if they can overcome shaky consumer confidence because of the pandemic, said Rodriguez of CBRE. Some restaurant-goers won’t feel safe inside a closed space, even as employees wear masks and gloves and the restaurants take steps to clean and ensure proper social distancing, he said.

And while many restaurants can seat diners on patios, the summer only lasts so long, Winsor said.

Retailers have their concerns, too, since shoppers can stay at home, order on Amazon and avoid contact with other customers and store employees.

At the Carlie’s Convenience store at Pikes Peak Avenue and Tejon Street in downtown Colorado Springs, owner Russ Mallery said he saw the  financial effects of the pandemic devastate his store over just 10 days. He’s closed his doors permanently as a result.

Mallery already had problems the last several years with transients camping out in front of his store, a problem he says hurt sales and that city officials did little, if anything, to address, despite his complaints.

But his store still was operating up until downtown businesses began closing their offices in early March and thousands of workers began telecommuting from home.

The next day, he closed his store for good.

He still operates a second Carlie’s Convenience store in the Claremont Ranch area, northwest of U.S. 24 and Marksheffel Road.

“That one is doing well,” Mallery said. “I can’t complain. Could it be doing better? Yes. But I can’t pull money out of that business to keep a business downtown going. … It makes no sense to do that.”

It won’t just be local convenience stores and restaurants that close; some large retail and restaurant chains are poised to cut back and downsize, too, said Mark Useman, executive managing director at Colorado Springs Commercial, a local brokerage.

Part of their decision will be tied to what kind of concessions, if any, their landlords will make, Useman said. Some landlords will allow tenants to skip rent payments for a couple of months, but they’ll have to make up the payments over the course of the lease, he said.

“I don’t think we know yet what’s going to happen, but you’ve got to figure there’s going to be more fallout,” Useman said. “There’s just going to be some tenants that aren’t going to be able to make it. … I don’t want to paint any doom and gloom because I want to see these businesses make it. It’s just a matter of how much working capital that they have to sustain themselves and how long can they do that.”