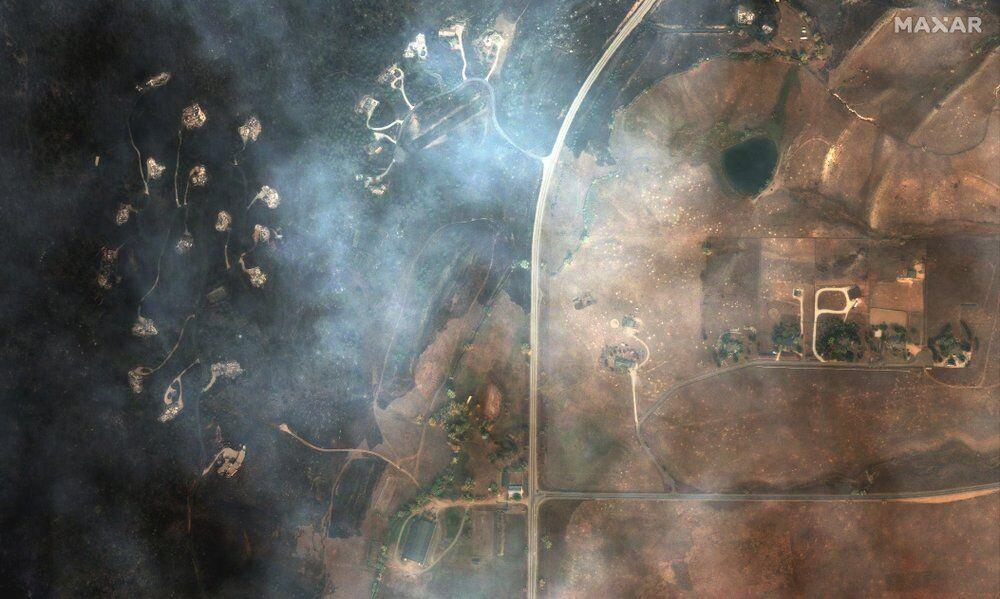 DENVER (AP) — It’s a snapshot from hell: A group of firefighters brace themselves against a furious wind blowing dust and debris and fanning flames in a reddish-orange Martian landscape that is all too real for crews battling several dangerous wildfires in northern Colorado and southern Wyoming.

Colorado fire officials posted the video by tweet this week to drive home the unprecedented late-season fire danger crews face in trying to contain the state’s largest recorded wildfire ever, west of the cities of Fort Collins and Loveland. Firefighters confronted another red flag day Wednesday with sustained winds of up to 50 mph (80 kph) in trying to protect structures in a handful of hamlets threatened by the Cameron Peak fire.

“Today is a critical day because of the direction and velocity of winds,” said Steve Kleist, spokesman for a Rocky Mountain Area firefighting team. “What happens today will set up what can do for the rest of the week.”

Crews aren’t banking on early predictions of Front Range snow later this week and this weekend, though any precipitation is welcome, Kleist said. Fire meteorologists say the bulk of any snow may avoid the Cameron Peak blaze, he said.

Crews supported by water-dropping helicopters focused Wednesday on protecting homes and other structures in the hamlets of Glen Haven, The Retreat, Storm Mountain and Cedar Park, Kleist said. They also were dousing spot fires caused by wind-blown embers from the main fire.

Just 52% contained, the Cameron Peak Fire has crept into portions of Rocky Mountain National Park, sent massive billowing clouds of smoke over Fort Collins and Colorado’s Eastern Plains, forced hundreds to evacuate their homes and damaged or destroyed more than 100 structures since it erupted Aug. 13.

Nearly 1,600 firefighters are battling that blaze and others in Colorado fed by severe drought that has gripped the state this year, persistent high winds gusting to 80 mph (130 kph) in higher elevations of the Rocky Mountain foothills, and tinder-dry forest lands with fuels bolstered by beetle-killed trees.

Fire crews scrambled Wednesday to contain other fires to the south in Boulder County and to the west of Rocky Mountain National Park. All told, according to the Rocky Mountain Coordination Center, an interagency support organization, about 3,000 firefighters were battling roughly 690 square miles (1,789 square kilometers) of land charred by wildfires in north-central Colorado and southern Wyoming.

“These temporary closures are necessary to protect the public and our firefighters, and we will keep them in place until conditions improve and we are confident that the risk of new fire starts has decreased,” Forest Supervisor Monte Williams said in a statement.

In Boulder County, officials on Wednesday ordered evacuations near the town of Lyons as crews battled red flag conditions in fighting two wildfires that erupted last weekend that damaged or destroyed at least 26 residences.

More than 400 personnel, using bulldozers and engines, worked the Calwood Fire, which began Saturday. Its 15 square miles (24 square kilometers) were 21% contained Wednesday. Another 100 personnel managed to construct a provisional containment line around the 460-acre (180-hectare) Lefthand Canyon fire just outside the town of Ward.

—To the west, nearly 300 personnel worked the East Troublesome Fire north of Hot Sulphur Springs and west of Rocky Mountain National Park. Burning in grass, sage and lodgepole pine, the fire had blackened 30 square miles (48 square kilometers) and was 10% contained.

—To the north, the 275-square-mile (440-square-hectare) Mullen Fire, which began in southeast Wyoming’s Medicine Bow National Forest and crossed into Colorado, was quiet, with 445 personnel mopping up spot fires. Containment was 73%.

Causes for all of the fires were under investigation.

Crews have shuffled between the Cameron Peak and Boulder County fires this week, underscoring a shortage of fire personnel and equipment that has plagued firefighting efforts nationwide, especially in California and the Pacific Northwest. Even Dan Gibbs, executive director of Colorado’s Department of Natural Resources, reported for firefighting duty at the Cameron Peak fire on Tuesday,

“Sure, we could use a lot more than 1,600 people at Cameron Peak and a lot more air support. It’s going to be a very long fire season here in 2020,” Kleist said.