Six months into pandemic, Salt Lake County reflects on past successes and challenges ahead 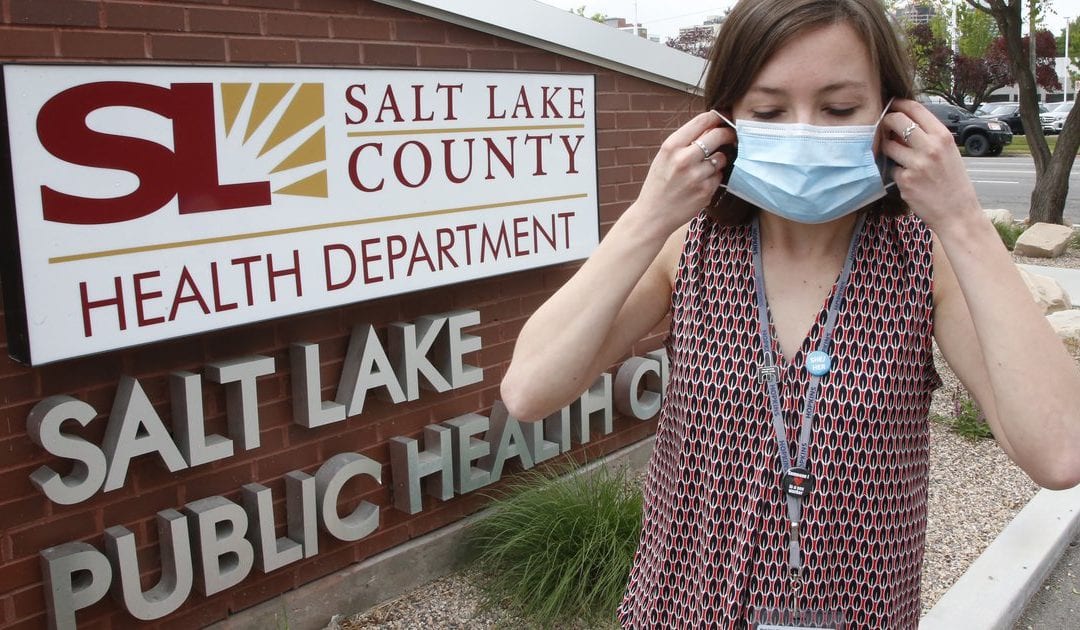 Six months have passed since Salt Lake County closed its public buildings, drew up restrictions for businesses and limited public gatherings as the coronavirus officially began spreading in Utah.

With past experimental responses to combating COVID-19 in the rearview mirror, government and public health officials are now looking at the long road ahead since the pandemic is still far from over. Salt Lake County Mayor Jenny Wilson acknowledged the journey to date hasn’t been smooth. Lives have been lost. The world remains a scary place.

“But I want to tell you, I am confident that the worst is behind us and there are better days ahead,” Wilson said at a news conference Tuesday. “We will continue to battle on behalf of you.”

The most noticeable success in reducing infections has been the countywide mask mandate, which correlated with a steady reduction in cases starting in July. But Wilson noted other, less publicly visible initiatives that made a difference. Dozens of library, recreation and arts employees were redeployed to help with county-run quarantine facilities for sick residents who couldn’t isolate at home. As COVID-19 cases peaked, the county employed 130 full-time contact tracers assisted by 500 county staffers part time.

As minority populations proved to be the most vulnerable to infection, county workers mobilized to connect with those communities to test and educate. From July to August, new COVID-19 cases among Hispanic and Latino residents fell by 66% and by 55% for Native American and Pacific Islander residents.

To date, one-quarter of Salt Lake County residents have been tested for the coronavirus. The rolling seven-day hospitalization count is down to March levels.

Wilson credited much of the county’s success in reducing infections to evidence-based decision-making.

“We don’t always see that at the federal government in some places right now, and I think you all know what I’m talking about,” Wilson said, in an apparent jab at President Donald Trump, who has acknowledged downplaying the dangers of the pandemic and who allegedly dismissed the advice of his public health experts. “But here at Salt Lake County, at every turn, we have measured data, looked at data, relied on science … relied on our own epidemiology teams.”

Wilson also praised the federal government, however, for coming together quickly in the early days of the pandemic to pass the Coronavirus Aid, Relief, and Economic Security (CARES) Act. That bill directed about $203 million to Salt Lake County, which the county is on track to finish spending by the end-of-the-year deadline.

The county has funneled $34 million to municipalities to aid in their localized responses. Another $7.6 has been spent on contact tracing and another $6.5 million went to public health expenses like public communication, personal protective equipment and facility disinfection. Nearly $4 million went to medical sheltering like quarantine and isolation facilities.

The county has also earmarked $40 million for Small Business Impact Grants. To date, $8.3 million in grants have been approved for nearly 500 businesses. Another 475 grant requests are under review.

Plenty of formidable challenges lie ahead. One looming unknown is how to best prevent infections as students return to school. Cases among children are on the rise, especially for high school students.

“Each day presents some new issues for us with schools,” Health Department Director Gary Edwards told the County Council at a work session Tuesday.

While schools have canceled large events like homecoming, students are still gathering on their own, Edwards said. At least three schools have had 15 cases of infection, meeting the state definition of an outbreak.

Edwards added some good news — although infections among high schoolers are up, hospitalizations and emergency room visits haven’t increased since schools reopened.

“So while we’re having more cases, we continue to see that those cases in those populations are less severe,” Edwards said.

County health officials are currently preparing to administer the eventual COVID-19 vaccine as well, with Wilson’s office earmarking $225,000 in CARES funding for that effort.

The Centers for Disease Control and Prevention reports that the vaccine will become available to Utahns in late October or early November, Edwards said. Those limited doses will go to health care and first responders to start. Doses for the general public likely won’t be available until early 2021. The vaccine will also only be available for those 18 and older, leaving school-age children vulnerable.

“But again, they are the ones least likely to have serious complications, so I guess that’s a positive,” Edwards said, estimating that vaccines won’t be ready for kids until at least a year from now.

At Tuesday’s news conference, Edwards urged the public to remain vigilant over the long months ahead.

“In order for us to be successful, it’s going to take the entire community working collectively to suppress transmission of COVID-19,” Edwards said.

The county can’t have healthy businesses without a healthy population, he added, and the government can only do so much to prevent the spread of infection.

“I continue to plead with all of us to work together to do what we can to continue to control this epidemic in Salt Lake County,” Edwards said. “We all have a role to play.”