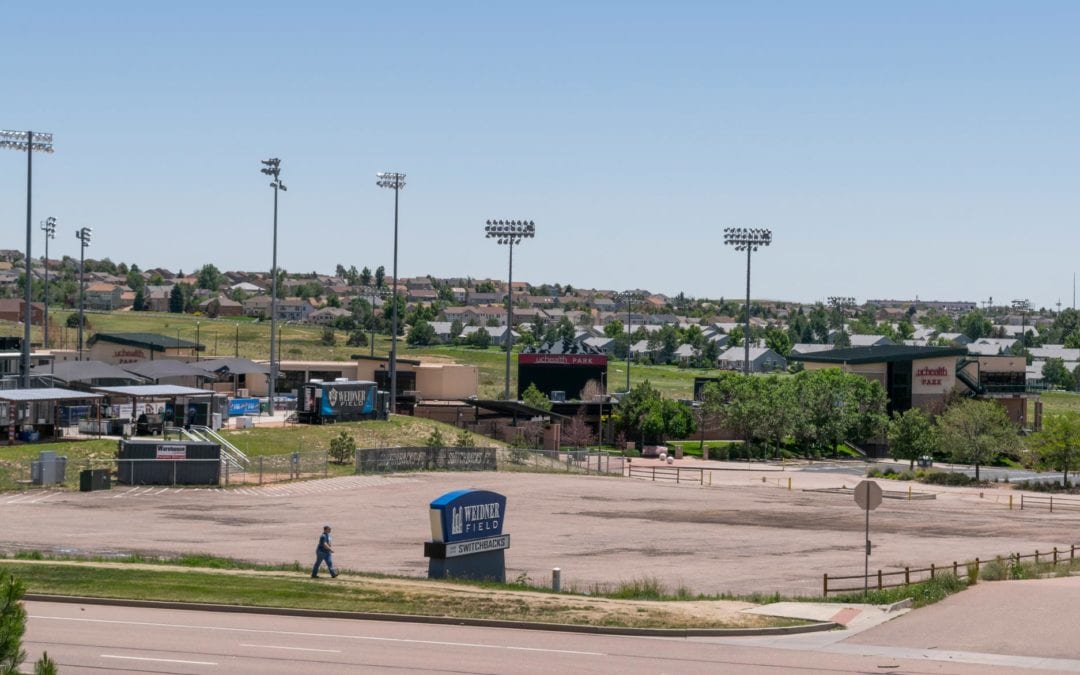 Change is on the horizon for northeast Colorado Springs. The Colorado Springs Switchbacks FC soccer club is moving downtown, the former Springs Ranch Golf Course will soon be turned into a massive housing development, and the Rocky Mountain Vibes baseball team faces an uncertain future at UCHealth Park.

The three entities are essentially neighbors in an area with Barnes Road to the north, Constitution Avenue to the south, Powers Boulevard to the west and Peterson Road to the east.

What happens with each development could significantly impact residential and commercial real estate in the area.

Home to Switchbacks FC, the soccer facility that is now Weidner Field was built in 1985 in a collaborative effort by the United States Soccer Federation, United States Olympic Committee and the city of Colorado Springs.

The facility was originally intended to host international soccer matches, but when USSF decided to headquarter its operations in Chicago and not Colorado Springs, Ragain said the land was given back to the city.

In 2014, the city entered into a 10-year lease with Switchbacks FC, and the team completed a $3 million renovation before its grand opening in 2015.

Switchbacks FC invested nearly $5 million in the stadium and facilities, but Ragain said the front office never saw its current 5,000-seat venue on Barnes Road as a long-term solution.

“The idea from the beginning was always that we wanted to move downtown,” he said. “And that’s been in process the past six years.”

The team broke ground on the new Downtown stadium in December as part of a $2.3 billion downtown redevelopment that includes the new U.S. Olympic & Paralympic Museum. The new stadium is approximately 145,500 square feet and will hold as many as 8,000 spectators.

Switchbacks FC will play its home games there beginning in spring 2021.

But the lease agreement between the team and the city for Weidner Field does not expire until 2024, and Ragain said the team has no intention of abandoning the facility.

“We’re not just gonna drop and leave, because it’s a huge community out there and we want firsthand touch points with all of them,” Ragain said.

Plans are still coming together for how the team might use the stadium after they relocate downtown, but Ragain said possibilities include sports camps, clinics and smaller events.

“It’s really community-based interactions at that venue we’re going to focus on,” he said. “So it’s really not even a revenue stream for us, it’s more about what the Switchbacks are doing in the community.”

What happens after 2024 when the lease agreement expires is unclear.

Ragain said the team might seek to extend its lease with the city, or the city might take the facility on itself.

“But there will be some time for us to figure that one out,” he said.

The team played its inaugural season in 2019, and had big plans for its second year that included hosting the league’s all-star game. But it’s one of 42 minor league franchises that may lose their connection to Major League Baseball, as the MLB seeks to restructure the minor leagues.

Phillips, the team’s general manager, said the league’s negotiations with MLB are ongoing, but even if UCHealth Park no longer hosts Vibes games, the team would still seek to use the space, possibly as an events venue.

With COVID-19 forcing cancellation of the 2020 Minor League Baseball season — the first time a MiLB season has been canceled since the league’s inception in 1901 — the Vibes already have been given a glimpse of what operations without baseball might look like.

For instance, instead of a holiday fireworks show following a Vibes baseball game, the team hosted a “Triple Play Holiday” event July 3, which included a drive-in movie double feature and fireworks display.

“And as far as next summer and the future is concerned …  we’re hopeful that we’re going to be back to normal fashion in 2021 and Vibes baseball will return. But we’re just going to have to wait and see how negotiations pan out and adjust accordingly.”

While the pandemic has made the team more reliant on other events to generate revenue, Phillips said it’s nothing new to the park’s business model.

“I think a lot of people don’t realize that we’ve been doing all these types of things, regardless of the pandemic situation,” he said.

Phillips said the ballpark is used about 200 times per year, including the 38 Vibes home games. They also use the space for business networking events, weddings, concerts and private corporate gatherings.

“Those are the types of things that we do all the time, and most people aren’t aware of them because a lot of them are more private types of events,” he said. “It’s a big part of our business model to complement the baseball season … It’s a continuation of things that we’ve been doing in the past and if we have to find more events to replace the season if it gets to that type of situation, then I think there’s definitely opportunity there and I think it could be sustainable.”

Should the Vibes lose their MLB ties and discontinue baseball, Weidner Field and UCHealth Park would essentially be shifting to similar formats.

Switchbacks FC also hosts non-soccer events to supplement its revenue, like beer festivals and concerts, but Ragain said because the team would bring all of its larger events to its new stadium downtown, and would only run community-based events at Weidner field, he wouldn’t anticipate any direct competition.

Andrew Fortune, a local Realtor and the owner and founder of Great Homes Colorado Inc., said what happens with the two teams is unlikely to have a major impact on the residential real estate market. But he said if the venues can attract popular events, it could make what is already a desirable area for residential ownership even more attractive.

“There’s really not a lot of reasons people come to that area … from the west side of town over to Powers,” Fortune said.

“But if you start having events there, that could change things. I could see that having a minor impact and maybe getting people to that side of town that normally don’t go over there. It would maybe make the demand go up a little bit.”

“But it’s really the arrow in a quiver of many things that we offer to the community in a broader spectrum that draws businesses to Colorado Springs.”

The former Springs Ranch Golf Course ceased golf operations in June, and Classic Homes is currently redeveloping the area into homes and apartments in a development called Greenways at Sandcreek.

Classic Homes’ plans for the 171-acre property east of Tutt Boulevard include at least 600 single-family homes and additional townhomes and apartments.

The company is currently in the land development entitlement phase and doesn’t yet have projected timelines for when homesites and homes will become available, according to its website.

The homes will inject new supply into what Fortune said is one of the most popular areas in town for home purchases.

“If you look in our MLS … just Stetson Hills and Springs Ranch — those two neighborhoods make up two-thirds of all the homes sold in our MLS every month,” Fortune said.

“So those are major, major areas. Homes sell fast there.”

There will likely be short- and long-term impacts on the residential real estate market.

Some of them are already being felt. Fortune said he’s had clients shy away from properties with golf course views because they don’t want their views to change.

“The short-term [impact] is that immediately home prices are going to drop,” Fortune said.

“In Springs Ranch, we’re already kind of seeing it. There’s going be this weird period where people are going to say, ‘Hey, what is this going to look like when it’s done? Because I don’t really want anything to do with it until it’s done.’ And I know that that’s going to directly impact home prices right off the bat.”

The long-term impacts of the development, Fortune said, will largely depend on how it’s built.

“If Classic [Homes] ends up building a nice community in there, where they leave some green space and they make it uniform and everything … I think it’s all going to balance out in like four or five years,” he said.

“It’s definitely not going to increase values, but it might not lead to any decrease … once everybody’s used to it.”

Leigh said the new development will have significant impact on commercial real estate.

“They say that retail follows rooftops, but you could also say commercial real estate — commercial buildings — follow rooftops,” Leigh said. “Because where people live, they want to work nearby. So if they’re building all those houses out there … they’re eventually going to need places to be employed and go to work at. And so that will drive more commercial development out there.”

As for where those commercial businesses might pop up, Leigh said it would likely be farther east along Marksheffel Road, where extensive development is already underway.

“That’s where we’re going to see the next migration of all the commercial is out on Marksheffel,” Leigh said.

“You’ll see tremendous growth zones emerge over the next 12 to 24 months. It’ll astound you. And a lot of it is driven by just the entire, aggregate economy.”