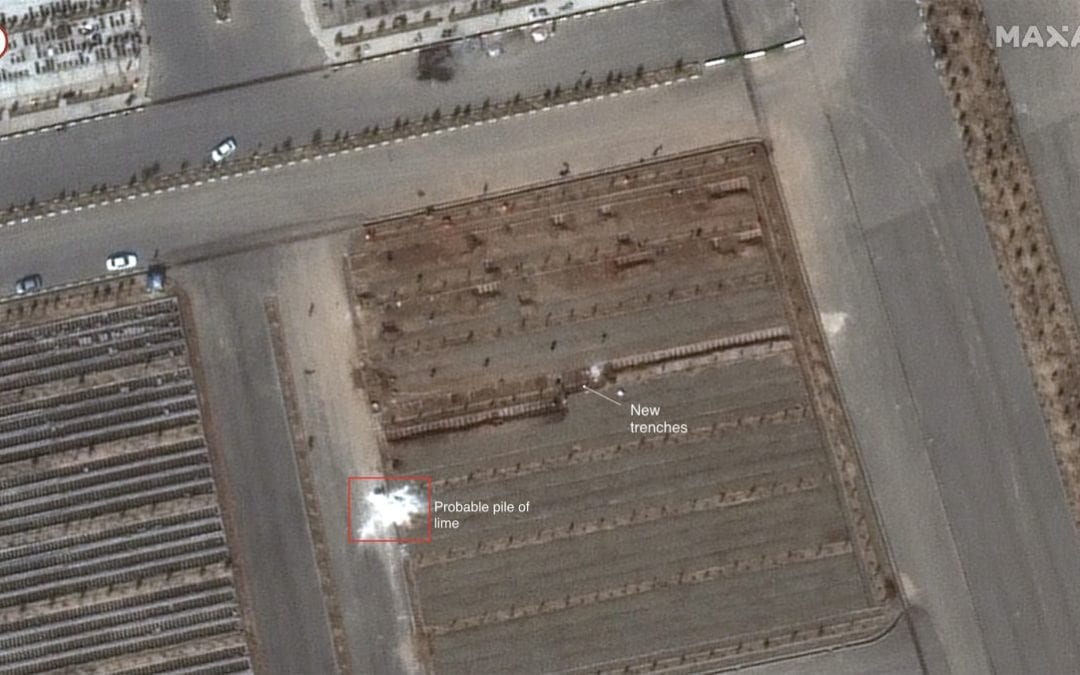 New DigitalGlobe satellite images from Maxar show Iranian authorities digging large numbers of graves in the Qom area, which media reports say is due to the growing numbers of coronavirus victims in the country.

The Washington Post, which noted that the graves were so extensive you can see them from space, said coronavirus caused several high-profile deaths in Iran’s leadership. “Among the dead are members of parliament, a former diplomat and even a senior adviser to the Supreme Leader,” the Post report said. “At least two dozen other officials, including a vice-president, have been affected.”

Coronavirus is classified as a global pandemic, but most of the cases have been in China. Other affected countries – in most cases – have pockets of infection, according to the World Health Organization, although there are exceptions. Italy, for example, is under nationwide lockdown, according to the BBC.

The World Health Organization calls for countries worldwide to quickly move forward with containment procedures. This is already happening in the United States, where countless events were canceled in the last few days, and entities ranging from Disneyland to the National Basketball Association have suspended events. U.S. President Donald Trump also suspended most air travel from Europe for the next 30 days.

An imagery analyst at Maxar Technologies in Colorado, which manages DigitalGlobe, showed The Washington Post one image that appears to have a large pile of lime. Lime is a substance often used to manage odor and decay in bodies. Iranian health officials have said they are using lime for coronavirus victims, the Post added.

Iranian authorities have been moving swiftly, creating two lines of graves of 100 yards (90 meters) each; that’s slightly less than the width of an American football field. The Post classified these graves as “trenches,” although that terminology was disputed on social media.

The graves have also been seen by Iranian media up close in recent weeks, wrote Esfandyar Batmanghelidj in a Twitter thread; he is founder and publisher of Bourse & Bazaar, a media company that supports business diplomacy between Europe and Iran.

Local authorities said more than two weeks ago (on Feb. 25) that they would prepare more graves in response to coronavirus, Batmanghelidj said, so the images didn’t come as a surprise.

“What these sobering images reflect, as far as I can tell, is the very sad situation where a local authorities have had to take the unusual step of digging a trench of graves at the Behesht-e Masoumeh cemetery in order to give the many who are dying a timely burial,” he wrote.

Islamic customs, Batmanghelidj added, call for swift burials that often happen within 24 hours of death. He included several local news reports in his thread, including one from Tabnak saying the authorities chose to put all the victims in a single location for sanitary reasons, including the ability to put bodies in cold storage until they could be buried.

Iran has more than 11,000 known coronavirus cases with 514 reported deaths, according to numbers from Johns Hopkins University. Both the Post and Batmanghelidj said the death toll is likely underreported.

Like everywhere else in the world, people with Iranian relatives who have died from the disease are grappling with the loss of their loved ones, as well as the restrictions required during burials.

“My uncle in Iran passed away from coronavirus,” wrote Ramtin Arablouei, host for National Public Radio’s history podcast Throughline, on Twitter. “He was gentle and kind. He’d been battling cancer for several years. His family had to stand one hundred meters away and watch him be buried by men in hazmat gear. My aunt is now sick. Please take this virus seriously.”