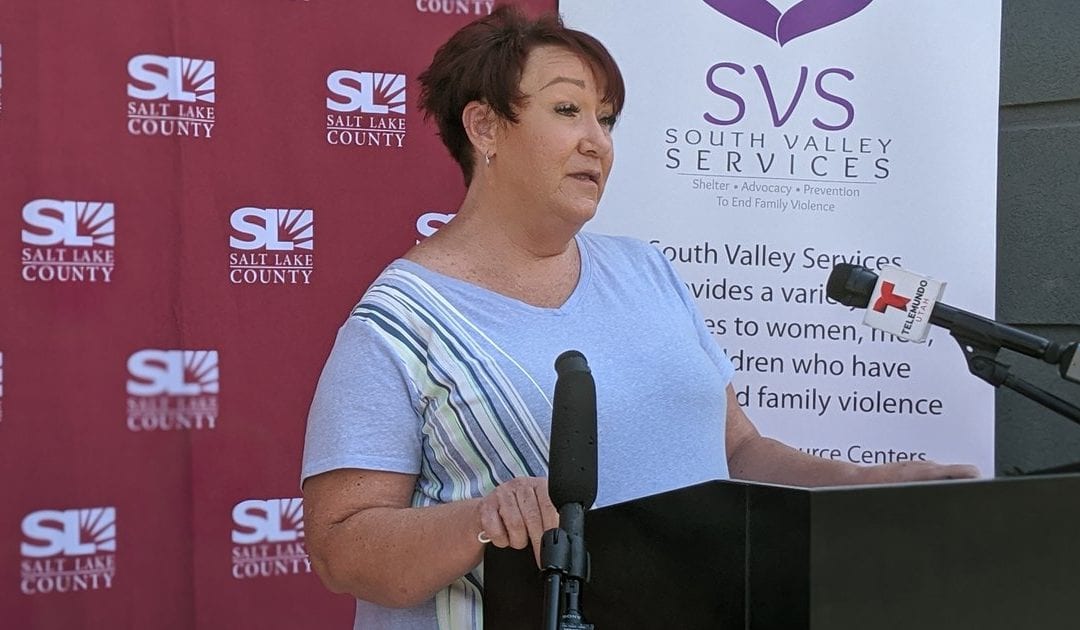 West Jordan • Rebecca Thomas never meant to end up homeless, but after she was assaulted and robbed in 2018, that’s where she found herself.

Thomas, who is a domestic violence survivor, said shelters were often full and on the streets, she always worried about finding a safe place to sleep.

“Every single night, I needed to worry if I was going to be abused again,” Thomas said.

Thomas said she was abused again, and with that came mental health issues and a substance use disorder. A year later, Thomas found South Valley Services, a domestic abuse resource center. She called them a blessing. The organization found her a home, and with that, Thomas started chipping away at her trauma and rebuilding her life.

Yet, during COVID-19 domestic violence resources centers like South Valley Services have been fielding a significant increase in requests for help, as the pandemic forces victims to stay at home with abusers, and as financial and emotional tensions escalate because of lost income or illness. Even as businesses have reopened, and some children have returned to school, the need for domestic violence resources hasn’t dropped, said South Valley Services Executive Director Jen Campbell.

Groups like Campbell’s and others needed help, she said. They received some from Salt Lake County Mayor Jenny Wilson and her staff. The county sent about $220,000 in federal coronavirus aid to South Valley Services and the YWCA, which also helps domestic violence victims. That means more survivors like Thomas can get the resources they need.

“We can meet the needs with increased staff to answer crisis calls. We can provide free mental health services to children and adults, and we can have funds to stabilize housing for those that are in danger of losing their homes,” Campbell said at a news conference Wednesday.

According to research by two Brigham Young University economic professors, 911 calls related to domestic violence increased as society shut down. Their study analyzed 14 U.S. cities, including Salt Lake City, and found that domestic violence related calls increased by 7.5% in March, April and May compared to last year.

During the first five weeks of widespread physical distancing, there was a 9.7% jump.

Police departments and advocates in Utah had been reporting this in realtime, worried about the implications for survivors. But the research of professors Emily Leslie and Riley Wilson provided another troubling finding: Many of these calls were coming from homes that didn’t have a history of domestic violence.

“And that could potentially have some large and long lasting implications, if we have new households getting involved in domestic violence,” Wilson said.

Those who experience domestic violence are at a higher risk for chronically smoking cigarettes, binge drinking, missing working, having poor mental and physical health and having difficulty concentrating or remembering, according to a 2016 Utah Department of Health report on intimate partner violence.

And children who witness trauma are more likely to perpetrate it or be victims of violent crime, including intimate partner violence, later.

Thomas said that when she didn’t have a home, it wasn’t by choice.

“It was by lack of knowledge and not knowing what to do with the trauma I had been through,” Thomas said.

Liz Watson, director of the YWCA’s Family Justice Center, said that even if some parts of society are still shut down because of the virus, help is available for people in need.

South Valley Services’ 24-hour crisis line is 801-255-1095 and walk-in services are available at both the West Jordan and Riverton city halls.

Editors note: Those who are experiencing intimate partner violence, or know someone who is, can also call the Utah Domestic Violence Link Line, 1-800-897-LINK (5465), or the Utah Rape and Sexual Assault Crisis Line, 1-888-421-1100. To report child abuse and neglect, call the Division of Child and Family Services hotline at 1-855-323-DCFS. For emergencies, call 911.