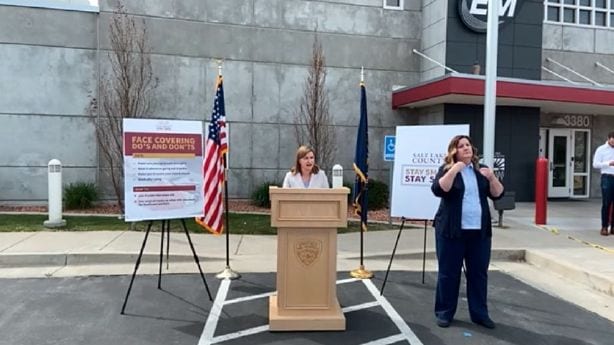 The removal of the stay-home condition will allow people to move more comfortably throughout the community amid the novel coronavirus pandemic, Wilson said. However, social distancing guidelines are still in place and social and other gatherings are still prohibited in the order.

Individuals also need to continue to wear face coverings when going out in the community, Wilson stressed.

Additionally, patrons can now order food inside of a restaurant or pick up takeout from inside of restaurants so long as strict social distancing guidelines in the business are being enforced.

There will still be no dine-in or outside seating allowed at restaurants.

The order’s name was also changed to “Stay Smart, Stay Safe,” instead of the original “Stay Safe, Stay Home.”

The county’s order adjustments came just hours after Gov. Gary Herbert announced the next phase of the state’s plan to reactivate the economy could come later this month.

“On some days there’s a spike,” he continued. “But overall the trend we are seeing is gradually downhill. And that’s what we need to keep seeing.”

Enough progress has been seen in those four areas to allow for the two adjustments made to the order on Friday. However, Wilson noted the changes weren’t significant.

“It’s not a big step today,” she said, adding that the county is easing the restrictions slightly and planning ahead for the next few weeks.

“We are optimistic about the future but we’re cautious at the same time,” Wilson said.

While people can move more freely around the county, playgrounds remain closed and residents are asked to still stay 6 feet away from others.

The mayor also addressed the rally some Utah business owners plan to hold Saturday in Salt Lake City, saying it was absolutely a violation of the order.

“A rally’s a rally; it’s a mass gathering and it is prohibited,” Wilson said. “Now is not the time.”

Wilson noted she herself enjoys attending rallies and supporting what she believes in but reiterated that it’s nearly impossible to practice social distancing at them.

The location of Saturday’s rally will not be released until 30 minutes prior to the event, but Wilson said she thinks law enforcement is aware of the gathering.

As far as reopening other businesses, like gyms or other personal services, Wilson said those discussions are in the works. A phased-in reopening of the government center will take place sometime in May, if conditions allow, she added.

Overall the trend we are seeing is gradually downhill. And that’s what we need to keep seeing.

Wilson thanked business owners who have “done the right thing and found ways to keep employees during this difficult time.” Even as the county continues to open in the coming weeks and months, those more at-risk should continue working from home, Wilson added.

As for the possibility of reopening restaurants, Edwards said everything won’t go back to the way it was.

For example, restaurant employees will likely need to wear face coverings and there will be restrictions on the capacity of those allowed in dine-in areas.

Wilson also said her staff is in the process of applying for more CARES funding to use in the county’s communities. She is also deploying more staff to work with vulnerable populations.

“As always, we continue to make evidence-based decisions here at Salt Lake County,” Wilson said. “I appreciate and look forward to your continued work and support on our journey to normalcy.”