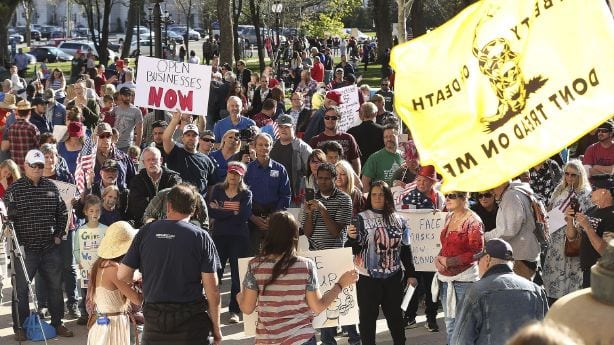 The rally was an “egregious” violation of Salt Lake County’s public health order banning mass gatherings — one that could contribute to more COVID-19 cases and therefore slow down efforts to safely ease more businesses back open, Wilson said in a virtual meeting with the Deseret News and KSL editorial boards Monday.

“Anytime you have 1,000 people (gather), you could potentially have more cases,” Wilson said, pointing to the Virginia pastor who, after defying warnings about the danger of religious gatherings during the pandemic, contracted COVID-19 and died.

“Any life lost irresponsibly,” Wilson said, “is heartbreaking, and it makes me angry.”

Wilson worries the rally — where hundreds of people gathered, some keeping their distance, others not, and only a fraction wearing face masks — could have “created more problems for us all in the future.” She worries that if more people continue to ignore social distancing guidelines, it could hurt efforts to “flatten the curve” of COVID-19 cases and draw out the economic pain of closures.

If mass gatherings continue, Wilson said perhaps law enforcement officials from Salt Lake City and Salt Lake County “need more conversations” about how to further discourage them and other violations of the county’s public health order.

“I guess I will be advising law enforcement to take a little stronger presence … but we’ve got to work through it,” she said. “We can’t be a police state. The fear that we would create in the community would outweigh that benefit.”

All public health orders in Utah are subject to the force of law. State code classifies the offense as a misdemeanor (class B for an initial offense and class A for repeat offenses). In Salt Lake County and in Salt Lake City, Wilson and Salt Lake City Mayor Erin Mendenhall have directed police to enforce the law with an emphasis on education — and so far no citations have been issued for violations of the public health order.

For Saturday’s rally, Salt Lake police officers were watching, but they didn’t intervene.

“We were there, we were just there from afar,” said Salt Lake City Police Chief Mike Brown.

Brown said he continues to direct his police force the same as he has since the public health order was issued, and that’s to emphasize education over force. He said his officers are encouraged to explain to violators why social distancing — keeping at least six feet away from each other and not gathering in groups of more than 10 — is important to slow COVID-19’s spread.

Saturday’s rally remained peaceful, with no clashes between police and protesters.

“In Salt Lake City, we hold sacred the right for any group to exercise their First Amendment right,” Brown said, noting that his department knew the organizing group, Utah Business Revival, had encouraged participants to practice social distancing.

“So I was somewhat disappointed to see those that didn’t abide by that,” Brown said, “but it’s also important for them to have the right to come together and express their feelings.”

I guess I will be advising law enforcement to take a little stronger presence … but we’ve got to work through it. We can’t be a police state. The fear that we would create in the community would outweigh that benefit.

“We don’t want the Constitution to be a casualty of the coronavirus,” he added.

Moutos, who resigned from the Salt Lake City Police Department in 2014 after he was placed on leave for trying to switch assignments to avoid riding a motorcycle in the city’s gay pride parade, also said Americans have the right to “go to work.”

“It’s my right to reach over and shake someone’s hand,” he said. “When my mom comes over to my house, and she’s worried about hugging me because a lot of this fear, I think that’s a problem. I think that’s a big problem.”

Moutos argues government officials, including Wilson, have gone too far to restrict freedoms, and Utahns are suffering because they’ve lost jobs as the state, nation and world economies languish. He said it’s not right that small businesses owners and workers, including hairdressers or restaurant waiters, suffer while people are still allowed to line up at grocery stores.

Moutos said that’s what he’s afraid of — “civil unrest” and a broken economy. He argued the cost of unemployment — including increased depression, suicide rates, alcoholism and more — could be more than COVID-19’s toll.

Moutos said Brown “did the right thing by not bringing police force” to the rally. He noted his group encouraged rally goers to practice social distancing, and some did. But for those who didn’t, he said that was their choice and their right.

“That’s what America needs to look like,” he said.

In response to an interview request from KSL on Monday, Mendenhall in a prepared statement encouraged Salt Lake City residents to follow social distancing recommendations.

“We encourage everyone to support local businesses in ways that don’t compromise public health,” Mendenhall said. “The purpose of the county health order currently in place is to prevent the spread of COVID 19, one of the leading causes of death in our country right now.”

Mendenhall noted the rally took place in Salt Lake City’s downtown 84101, one of most COVID-19-positive ZIP codes in the entire state of Utah.

“We’re grateful for those who are taking the order seriously by not gathering in large groups,” Mendenhall said. “We should all be making these sacrifices for doctors, nurses, medical workers, first responders and front line workers who are most at risk right now.”

The mayor declined to comment on the arrest of a man who Salt Lake police say encouraged people to bring guns to the rally and threatened Mendenhall. Police said the man, Marlin Richard Baer, 58, “stated the mayor needs to open up the city. If she doesn’t, she’ll be forcibly removed from office. There’s a protest tomorrow and if things don’t change, a civil war is coming, and the police can’t stop me,” according to a police affidavit.

Brown, when asked about that arrest, said police concluded the man was not tied to the organizers of the event.

Moutos said the man’s alleged call for violence was completely contrary to his group’s message. He said when he learned of the man’s arrest, his group removed the man from its social media page.

“We do not advocate any way, shape or form of violence, period,” Moutos said. “If there’s any violence coming from anyone, the answer is no. We bring peace. We bring solutions.”

Wilson wondered how many of the rally’s attendees actually worked in industries that have been forced to close, including dine-in restaurant services, nail salons or barber shops. She said she has “incredibly deep concern” for those industries, but noted other businesses have been allowed to stay open as long as they follow social distancing guidelines.

It’s my right to reach over and shake someone’s hand. When my mom comes over to my house, and she’s worried about hugging me because a lot of this fear, I think that’s a problem. I think that’s a big problem.

Wilson said Saturday’s rally “seemed very political,” and she worried facts about COVID-19 — its deadly impact on vulnerable population, its highly contagious nature, how some carriers can be asymptomatic, and how it has overwhelmed hospital systems in other states and countries — are being lost as the issue becomes increasingly politically polarized on local and national levels.

She said threats and vitriol are nothing new to elected leaders — but it’s still unfortunate to see amid a global pandemic.

“I just have to wonder about the character of somebody moved to those means in this horrible time,” Wilson said. “It’s hard enough, frankly, for Mayor Mendenhall, new to the office doing her best, and me in this office, to have that happen. It’s frightening, and it’s just wrong. But somebody’s got to lead through this, and we just deal with those things day to day.”

“This isn’t about red or blue, this is about right or wrong,” he said, boiling it down to constitutional rights and freedoms. Above all, he argued “the prudent thing Mayor Wilson can do is immediately remove restrictions from work” to prevent “deaths of despair.”

The mayor said her team is watching data every day to determine when (she hopes around early May) restrictions will begin to lift. She said the key is when the transmission rate, or the time it takes for the virus to replicate, reduces to less than a 1 to 1 ratio for at least two weeks. Once that rate slows enough, Wilson said officials will examine how to open up those businesses, but with enough precautions to prevent another spike in spread.

“I listen to the health experts,” she said. “That’s our guide.”