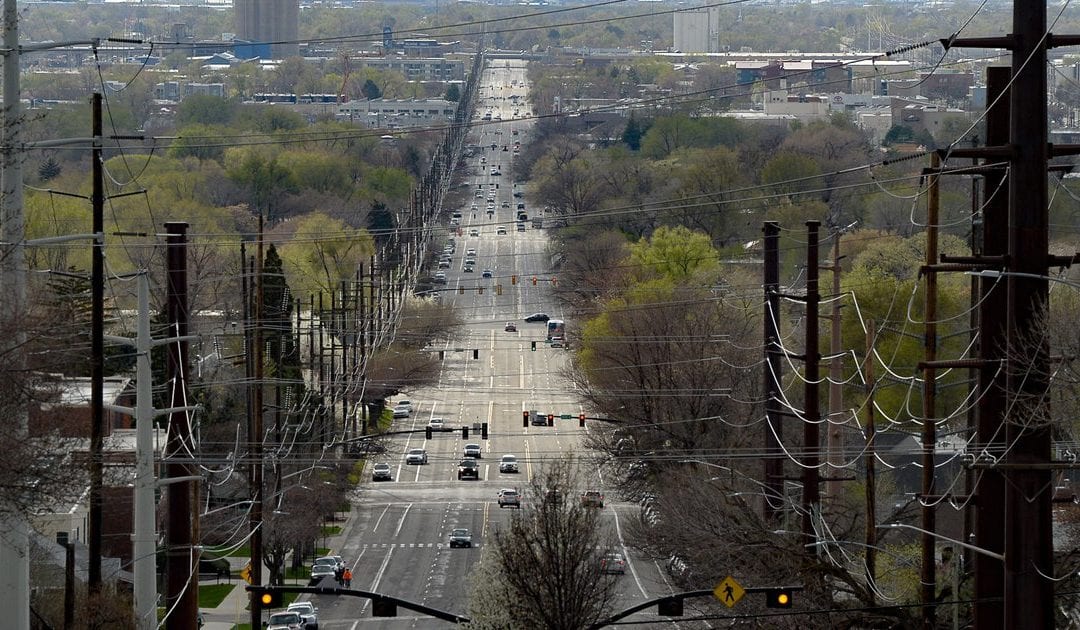 Salt Lake County announced Tuesday that it could begin lifting some coronavirus-related restrictions on businesses as soon as the end of this week — a move that reflects a lower-than-expected strain on the area’s hospital system, low transmission rates and robust contract tracing and testing.

But Salt Lake County Mayor Jenny Wilson said the decision to reopen is not “a really good moment” and noted that while the curve of cases in the urban center is flattening, it’s not on “the decline that we would like.”

“I’m not feeling light right now,” she said during a virtual coronavirus briefing with the Salt Lake County Council on Tuesday. “I’m feeling rather heavy and somber about where we are. I think the virus is going to be with us for a long time.”

The Utah Department of Health reported four new deaths from COVID-19 on Tuesday — all of them in Salt Lake County. All four were older adults with underlying medical conditions; two were living in long-term care facilities and the other two were hospitalized, said state epidemiologist Dr. Angela Dunn.

That brings the total number of deaths in the state to 45. The state also added 110 new cases of COVID-19 on Tuesday, bringing its overall tally to 4,343; just over half of those are in Salt Lake County, the state’s largest population center.

Meanwhile, the total number of people who have been tested from the coronavirus rose to 102,439 — 2,247 of them since Monday’s tally. That’s a smaller daily testing total than in the last few days, as testing has been ramping up near the state’s capacity.

The announcement from Salt Lake County that it will look at opening businesses back up comes the same day Utah Gov. Gary Herbert announced the state will begin relaxing some of its own restrictions put in place in March to contain the spread of the coronavirus — allowing in-restaurant dining, access to gyms and salons and gatherings of up to 20 people.

Herbert said at a news conference that the move isn’t a one-size-fits-all solution. Counties with high numbers of cases that don’t want to ease restrictions should work with local health department officials and the state health department to come up with a plan that may vary from the state’s, he said. That could work in the other direction, too, if a county has a low case count and thinks it can move toward normalcy faster.

Wilson told the council that county leaders were examining their own regulations in light of the governor’s plan and would have more details Wednesday to offer to restaurants and others in the service industries. A stay-at-home order she issued last month is due to expire Friday, May 1.

But the mayor seemed to express concern that the move to reopen too soon could exacerbate cases and indicated that the county was, as the state’s largest, most populous and most urban, “probably the least willing” across the state to move forward with opening.

“The data is just really flat right now in a good position, but we’re not going to see a rapid decline in the near future, especially with the governor’s move today,” she said.

The county health department noted in a tweet on Tuesday that reopening is “contingent on the latest data we receive about the spread of the virus locally” and that the date “could change if virus transmission increases in Salt Lake County.”

Wilson said her message to the public is not “’Great, let’s go, let’s do things differently.'”

As the county braces for the reopening of nonessential businesses, Salt Lake County’s health department doesn’t plan to hire more staff to trace residents who may have been exposed to the virus, according to Salt Lake County Department of Health spokesman Nicholas Rupp.

If more people are needed beyond the current crew of more than 130 people, he said, the county will transfer and train staffers from other departments that aren’t operating right now, like those working in libraries or parks and recreation.

Dunn said at the state’s Tuesday news briefing that she believes the state at large also has enough people to meet whatever tracing need arises. “We do have a deep well of people who can step in,” Dunn said.

Rep. Ben McAdams made a visit Tuesday to the Salt Lake County Public Health Center — which is being used as a hub for contact tracing — sporting a coronavirus beard and a clinical face mask and carrying boxes of donuts, as a thank you for the people who did contact tracing for him after he was diagnosed with COVID-19. 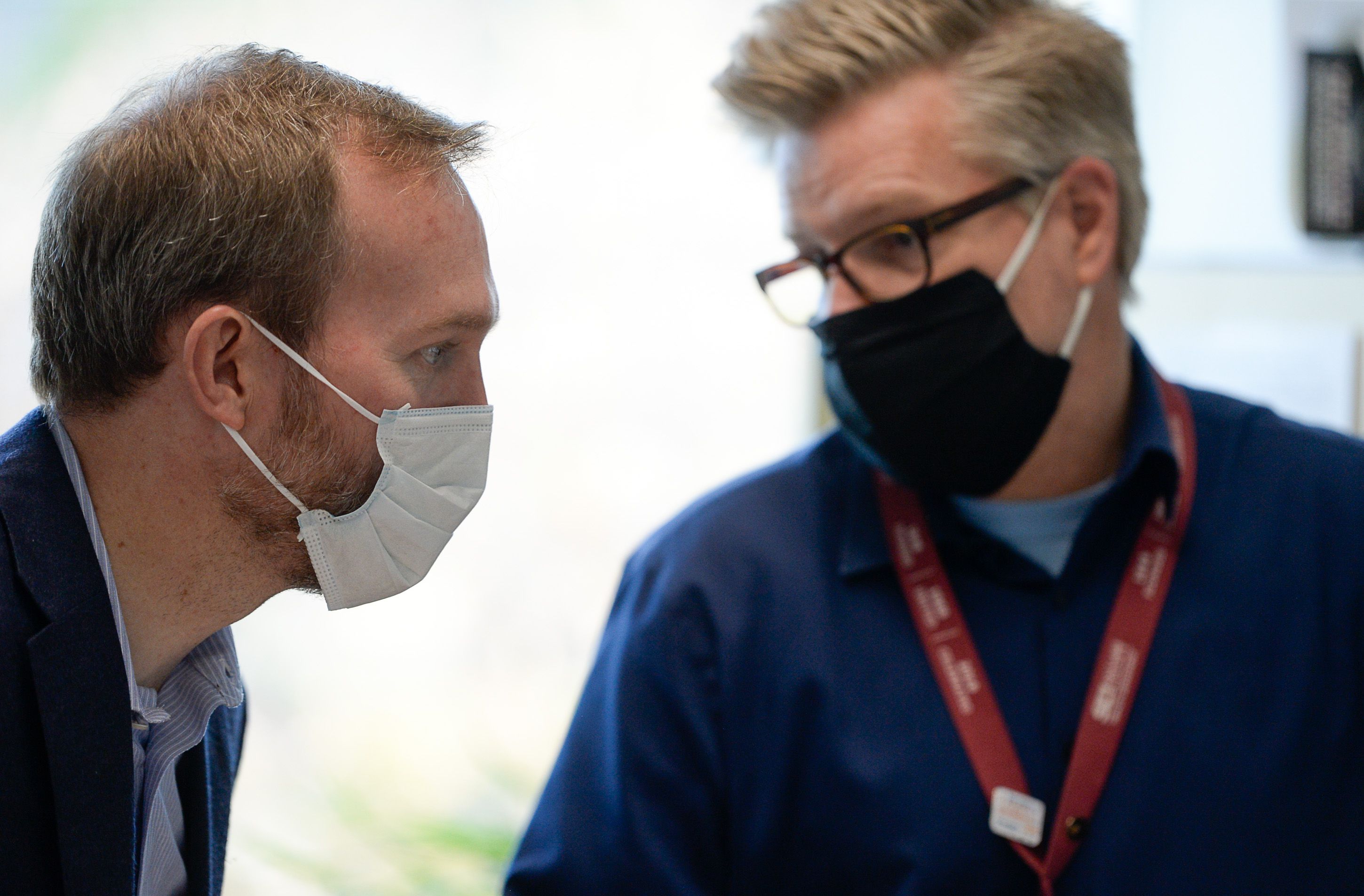 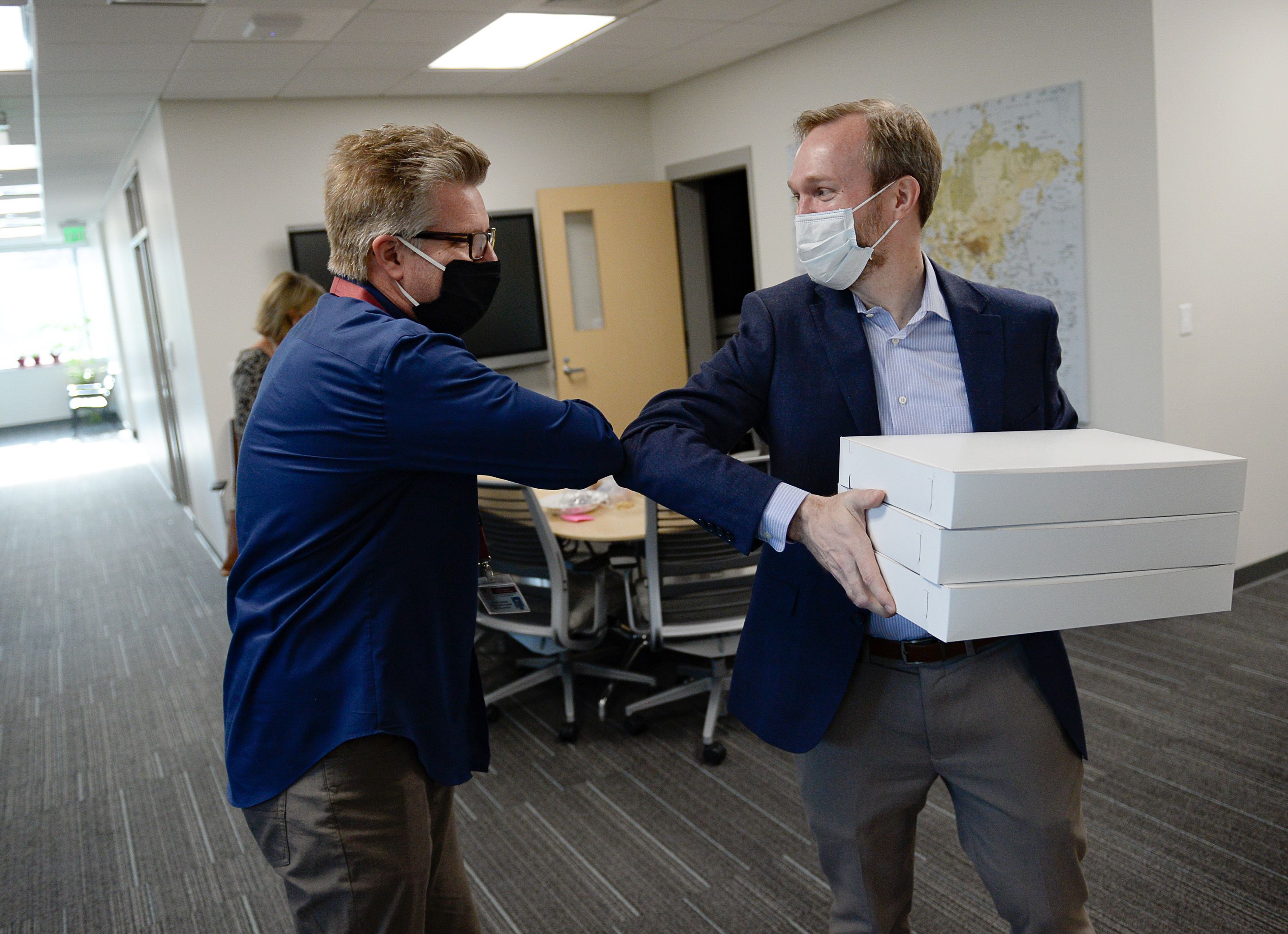 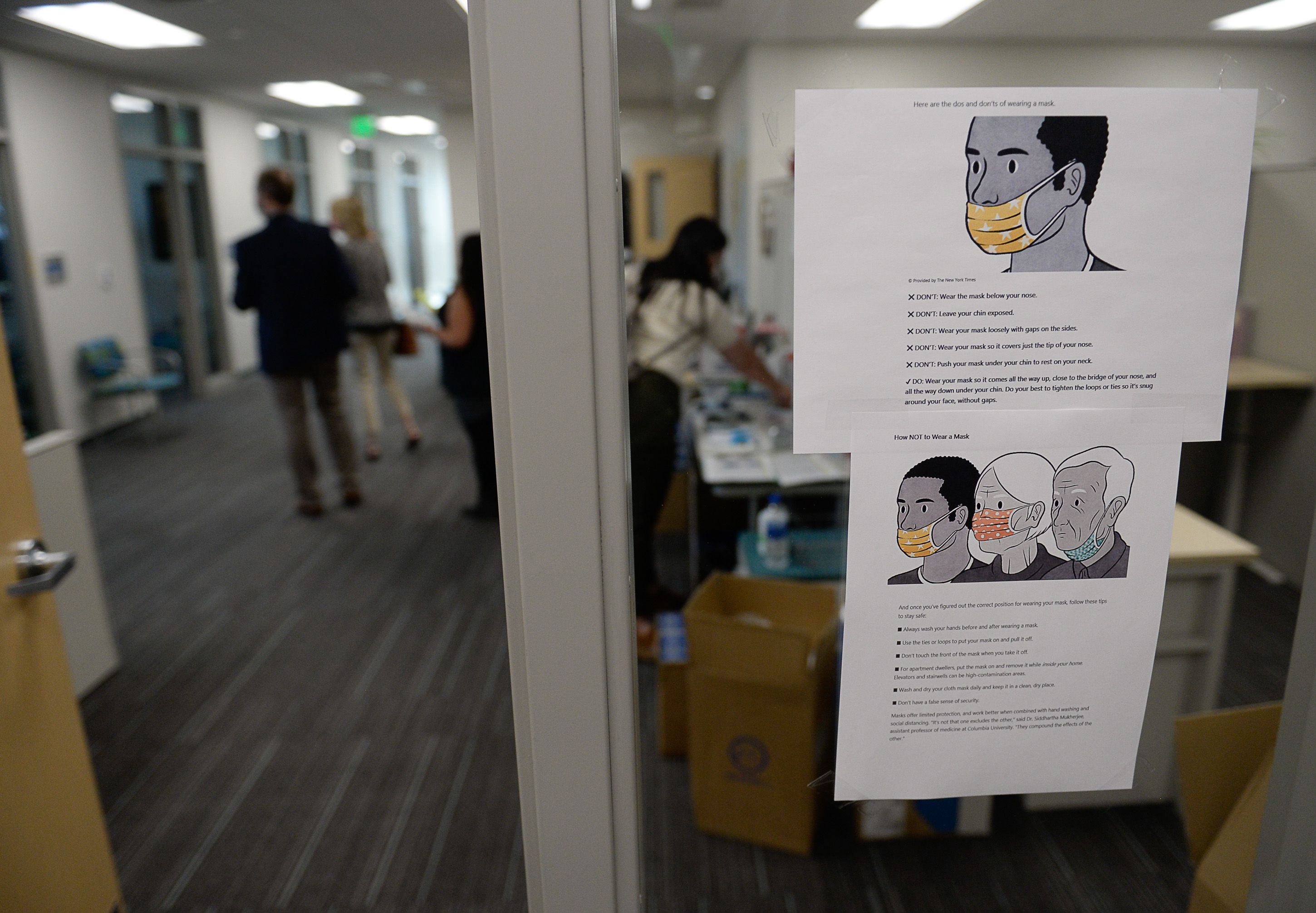 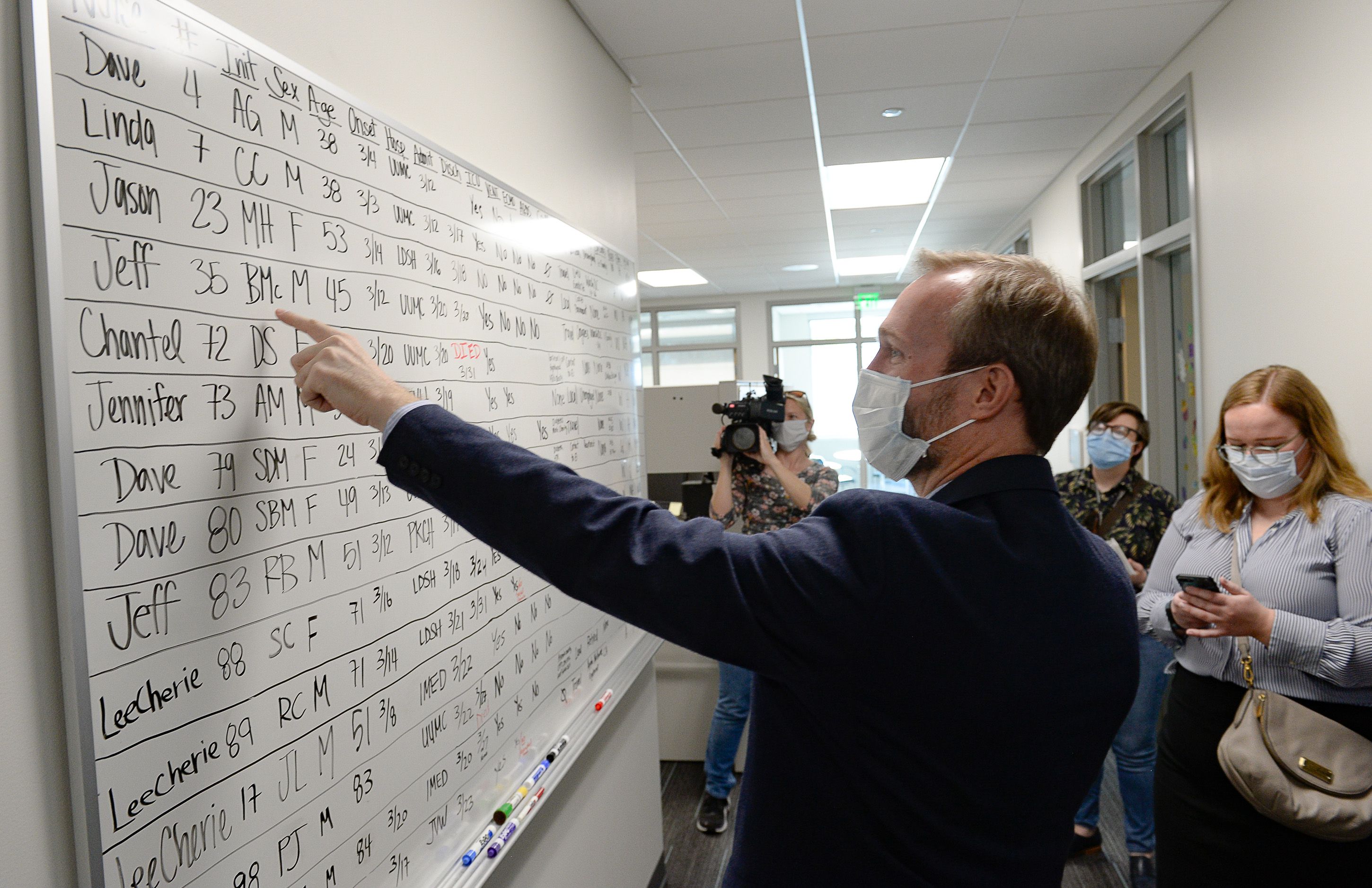 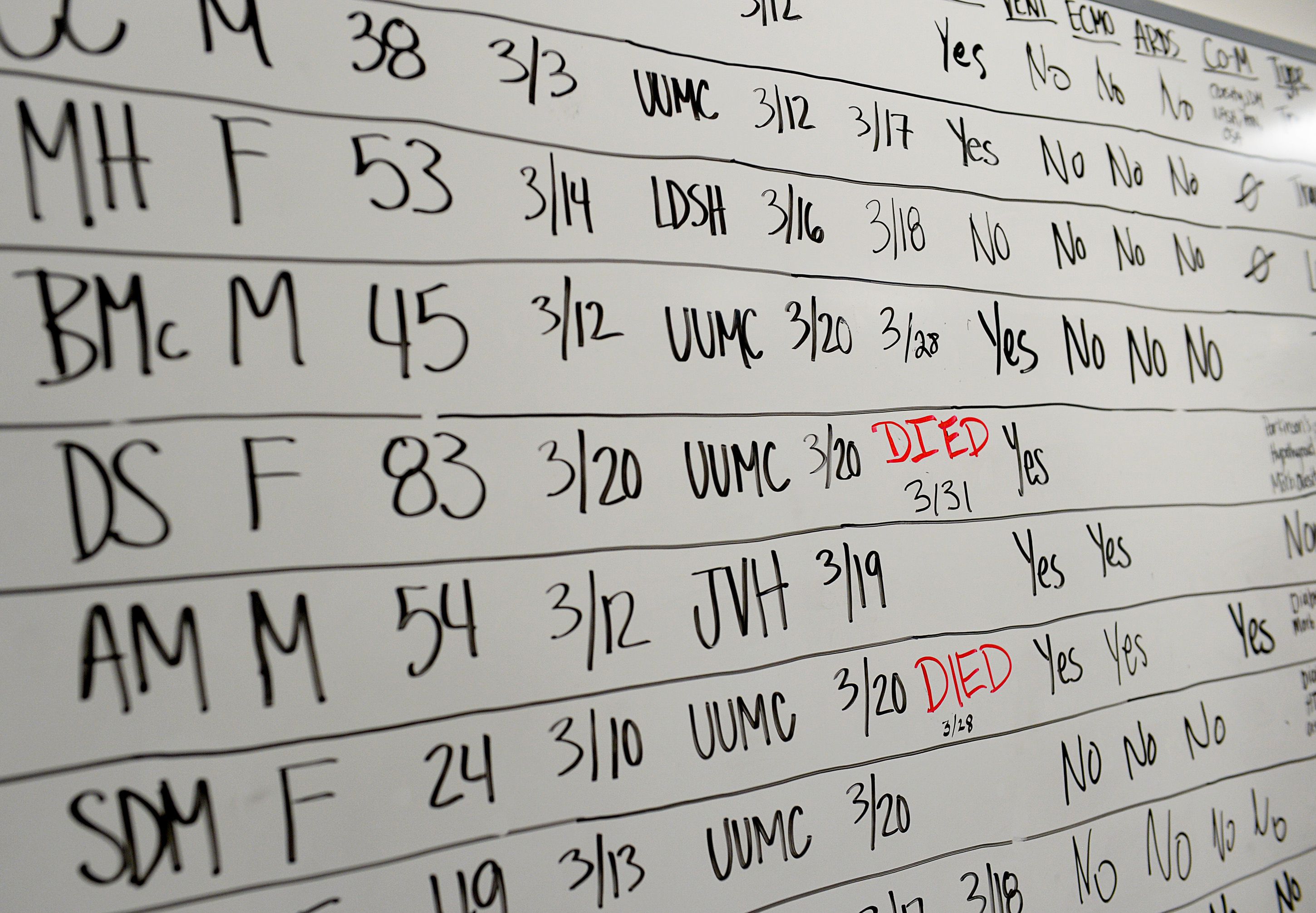 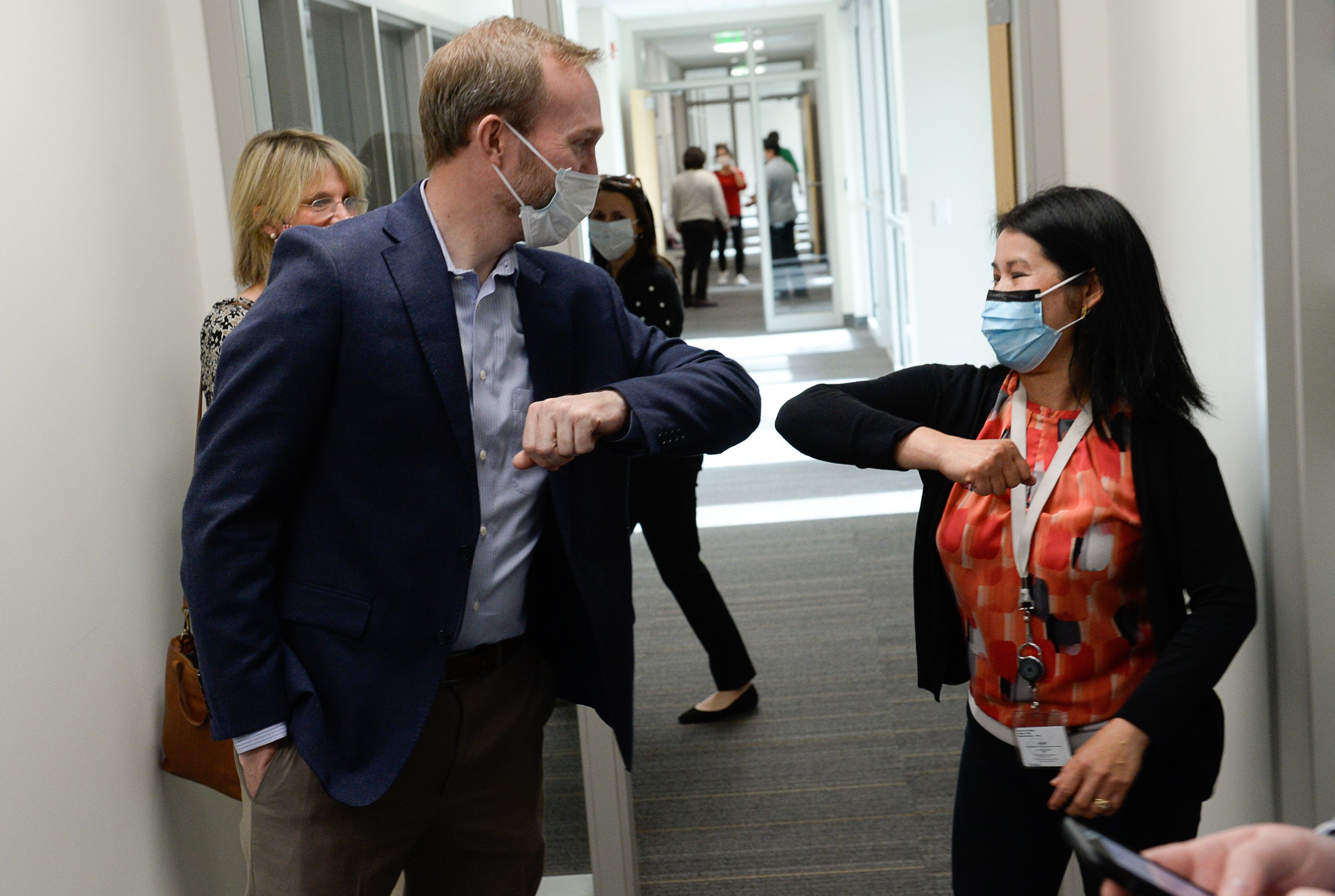 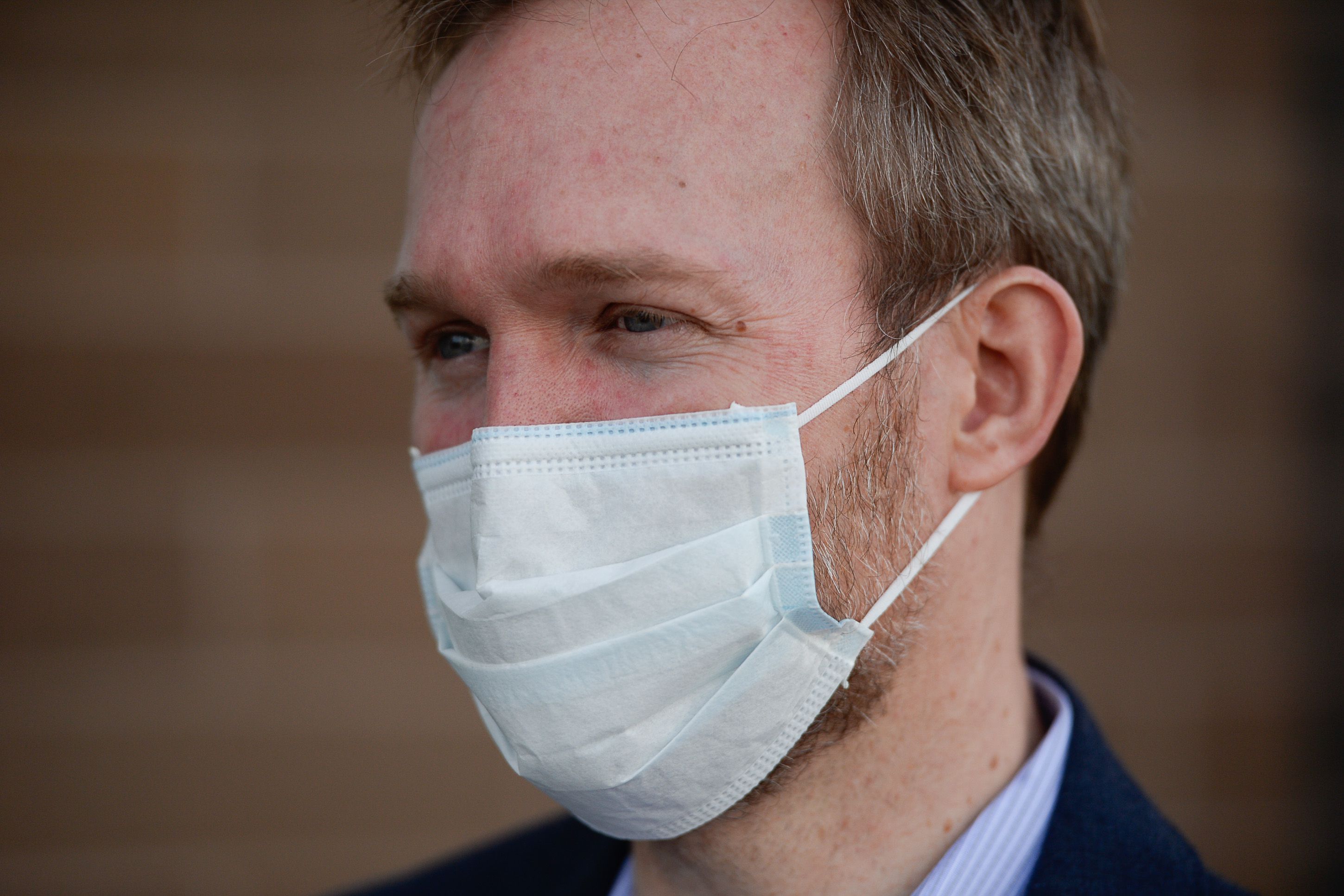 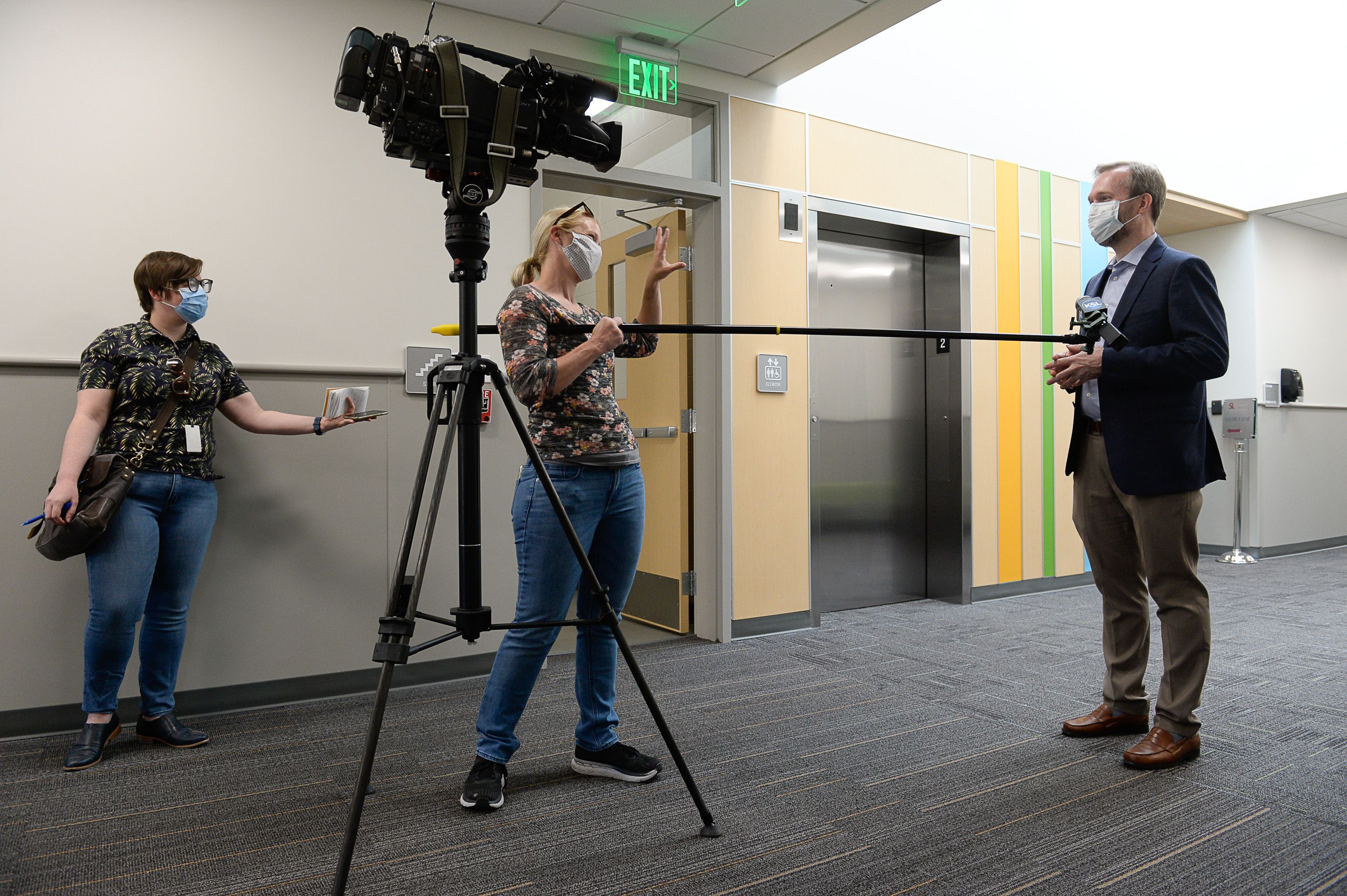 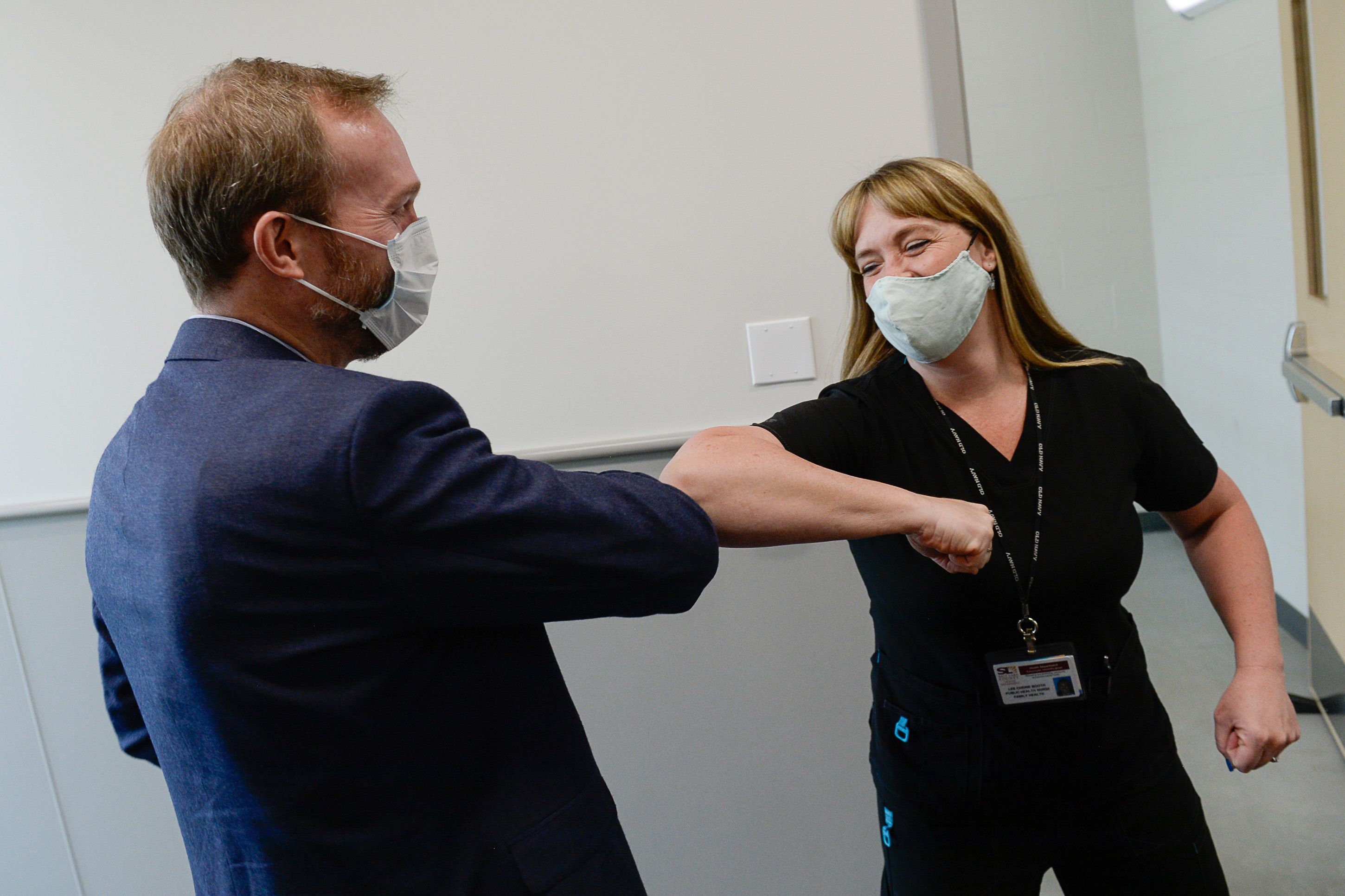 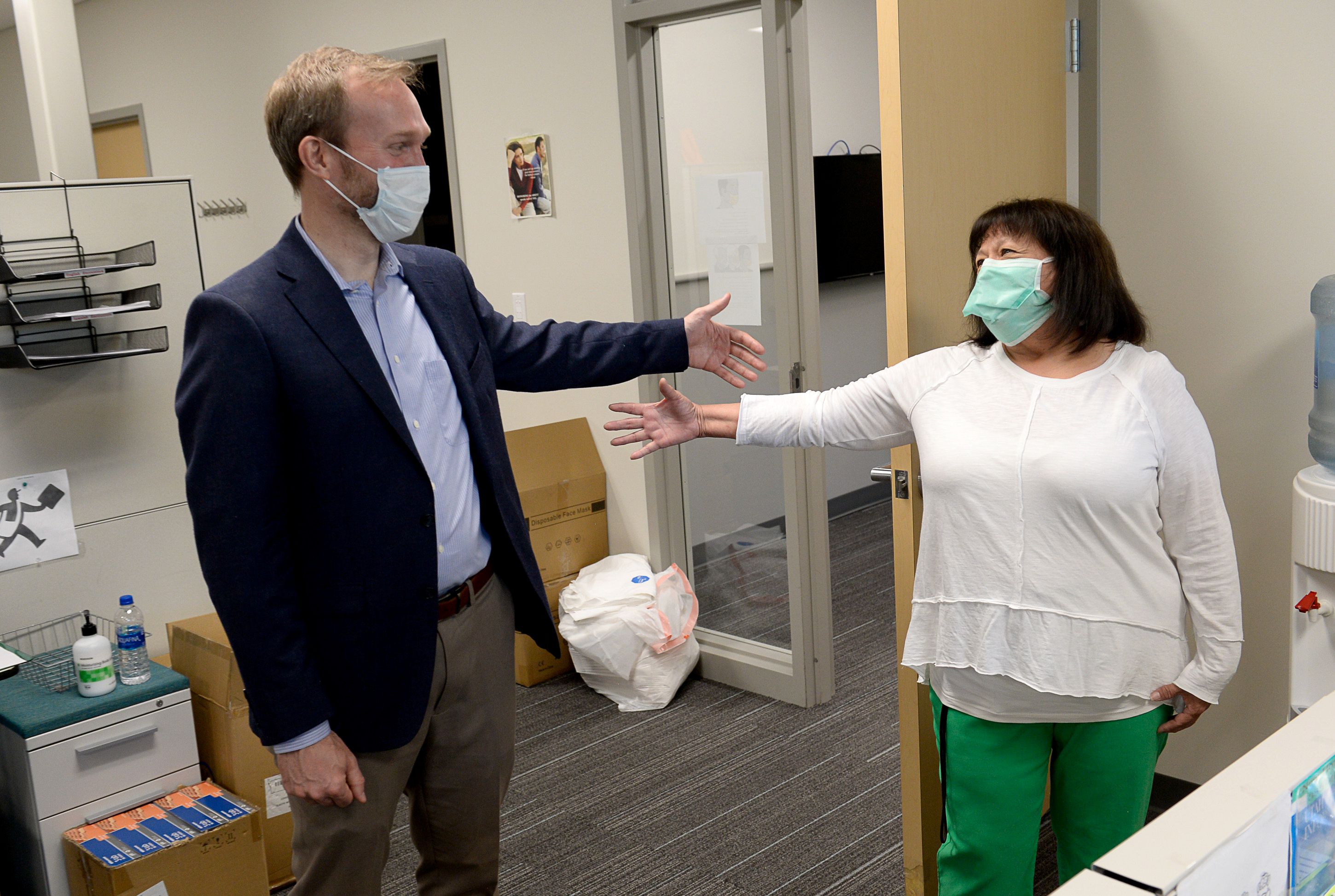 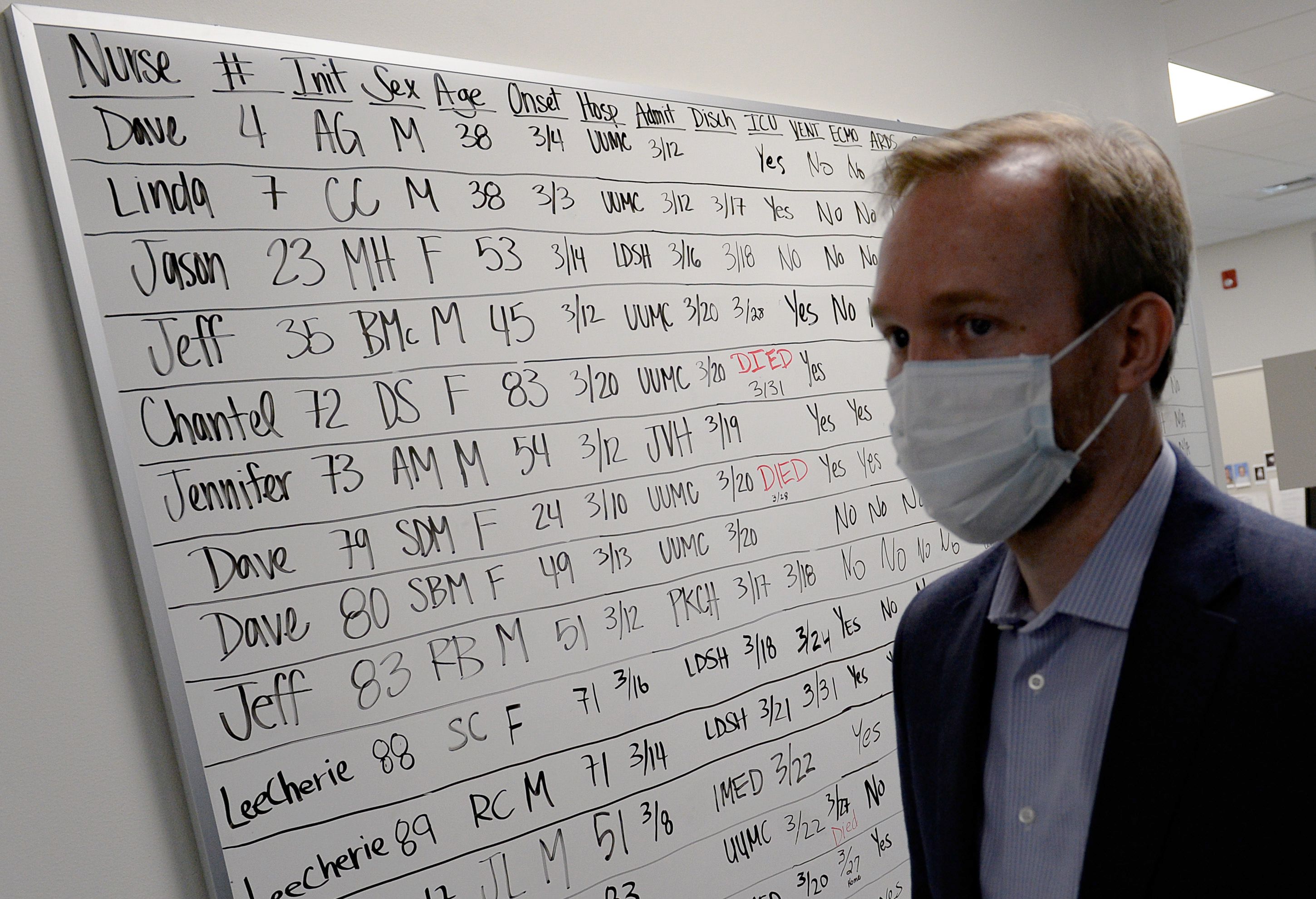 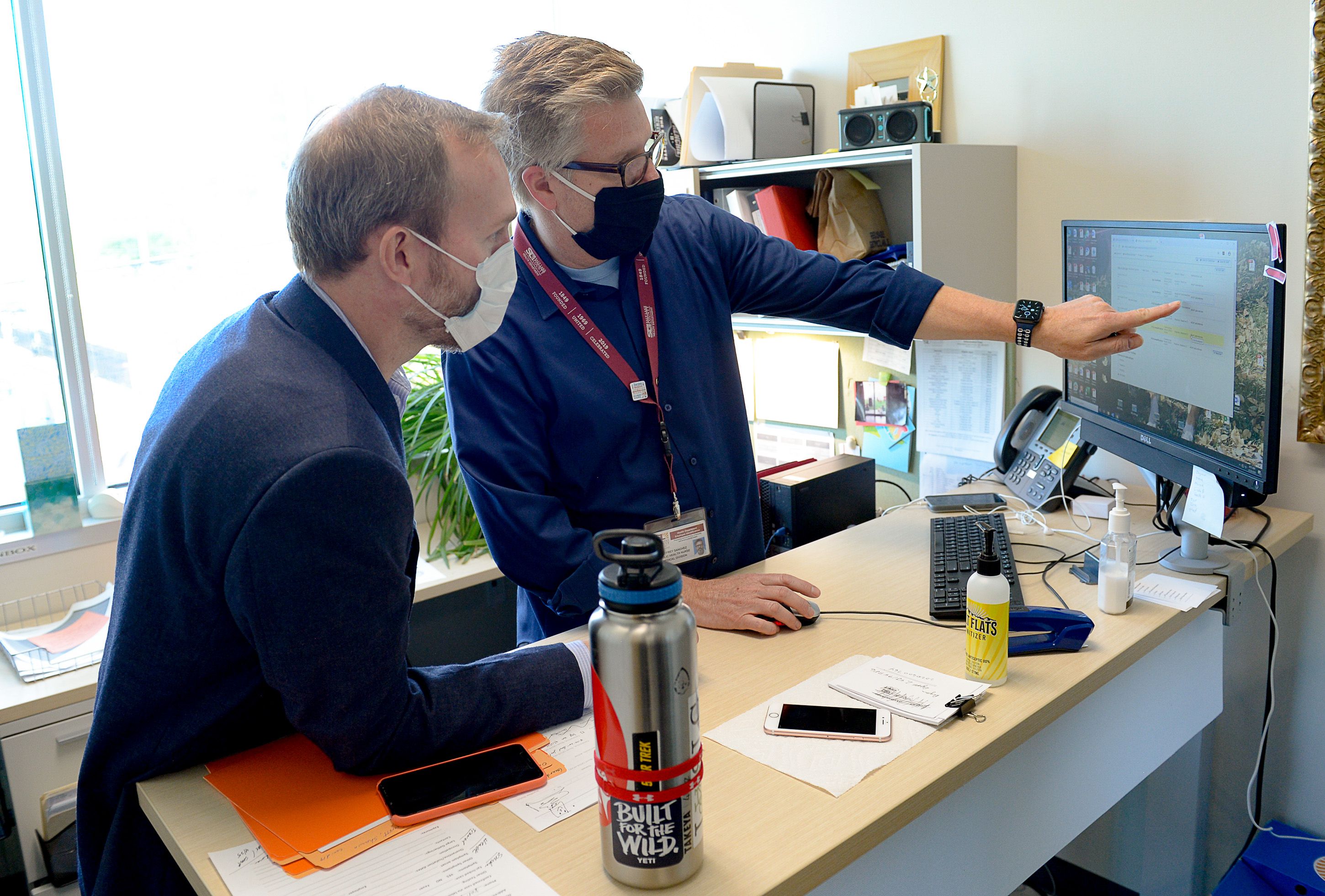 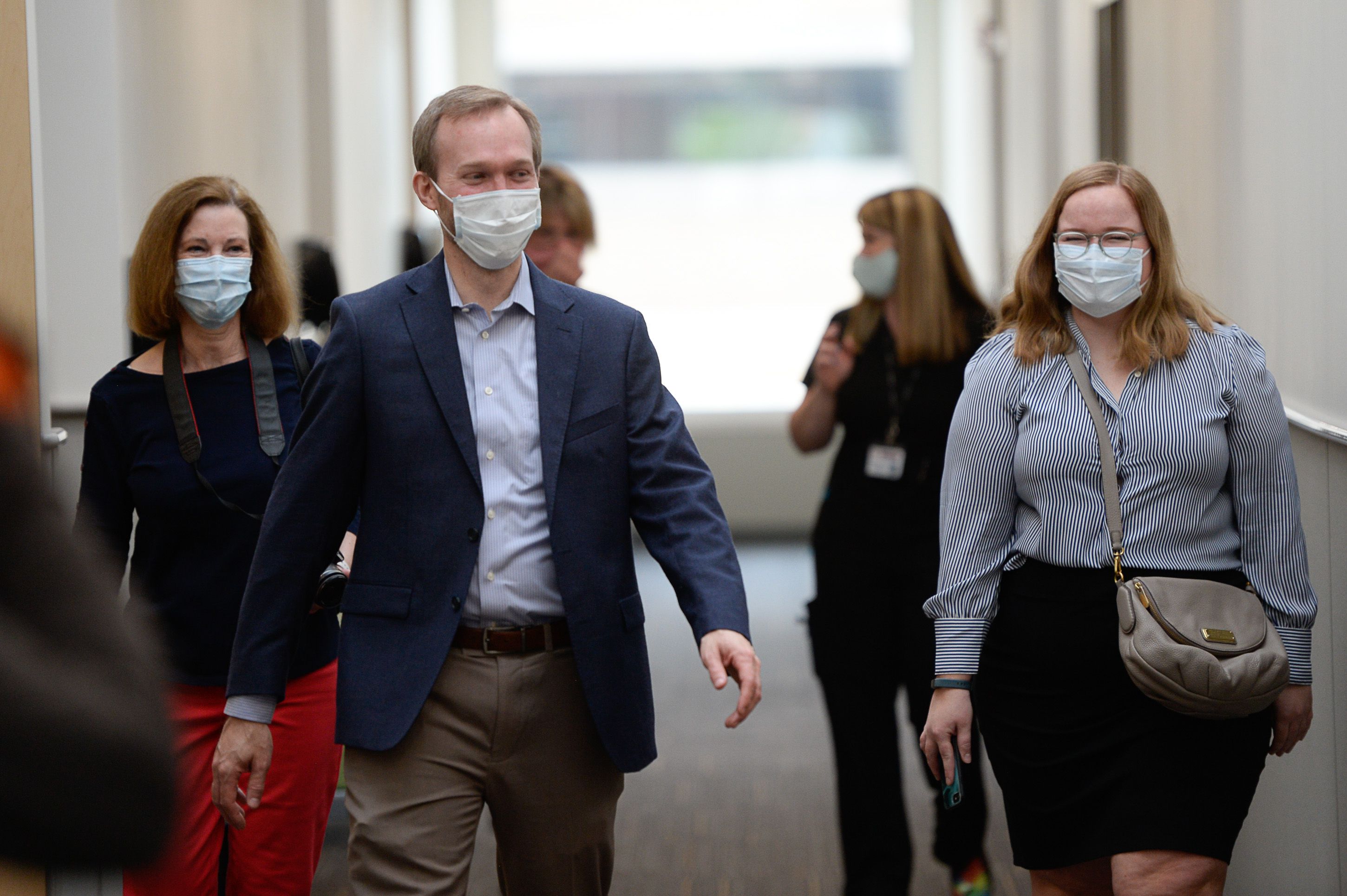 There, McAdams finally met Jeff, the contact tracer whose voice he often heard as the county employee checked on his symptoms and tried to get to the bottom of who the congressman may have come in contact with.

As the former county mayor toured the building, he stopped at a whiteboard where staff tracked the county’s earliest cases of COVID-19. Among the rows of abbreviated information, he found a familiar case — his.

“Congress,” McAdams said, pointing to the work column and joking, “That kind of narrows down the anonymity a little bit.”

Also this week, as staff have become familiar with their new COVID-19 duties, Salt Lake County got a new batch of data to decipher: antibody testing results.

Officials have determined that COVID-19 produces two specific antibodies, one at the beginning of the illness and one toward the end. But the science is still out on what the antibodies mean, said Lee Cherie, a public health nurse with Salt Lake County.

Should everyone with the first antibody be tested for COVID-19 with a nasal swab, or is it a reliable indicator? Is someone still contagious if they have the later-onset antibody? Are they immune? If they’re immune, for how long?

Dunn said Tuesday it’s still unclear if people can develop immunity from COVID-19, or if they do, for how long. So does antibody data “mean anything? Or does it open up a bigger box of questions?” Cherie said.

Resolving those questions is another challenge health officials face as Utah begins to try to move past the initial severe phase of the outbreak.