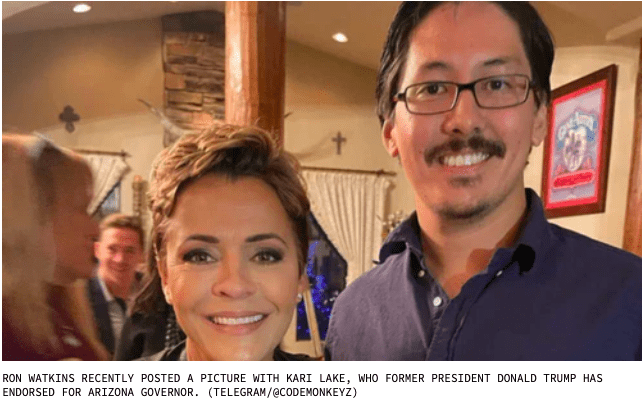 Republican congressional candidate Ron Watkins aka “Q” of QAnon conspiracy cult fame, Ron Watkins Slips Up, Suggests He Is Q, in HBO QAnon Documentary Series, appears to be the subject of an investigation by a joint state and federal task force in Colorado regarding the leak of sensitive election data from Dominion Voting Systems.

The FBI has raided the home of a Republican election official in Colorado accused of facilitating the leak of sensitive election data to QAnon influencer Ron Watkins.

The raid on Tina Peters’ house took place in the early hours of Tuesday morning and coincided with raids on three other properties, including the home of Sherronna Bishop, who was formerly the campaign manager for Rep. Lauren Boebert.

“We executed four federally court-authorized operations today to gather evidence in connection with the investigation into the Mesa County Clerk and Recorder’s Office,” District Attorney Dan Rubinstein told Colorado Politics. “We did so with assistance from the DA’s office from the 21st Judicial District, the Attorney General’s Office, and the FBI.”

Peters is accused of allowing an unauthorized person access to a secure room where voting machines are stored, and permitting them to copy sensitive information from those machines. Days later, while employees from Dominion Voting Systems were performing a routine software upgrade on the machine, the same person was allowed into the room, where he recorded

The video and the copied data were then leaked to Watkins, and the former 8kun administrator, who is now running for Congress in Arizona, presented the data during Lindell’s Cyber Symposium.

Oh, Dude, the FBI is coming for you.

Peters confirmed the raid on her home in an interview on the online streaming service Lindell TV on Tuesday night. She said she was “terrified” when the officers called to her door.

[V]ideo footage of the raid posted on Telegram portrayed a much more typical scene of a raid, with some police officers dressed in their uniforms and some federal agents wearing bulletproof vests over regular clothes.

Peters is also facing an investigation by Colorado’s Independent Ethics Commission over allegations that she violated a state constitutional gift ban by accepting flights on Lindell’s private plane, and other travel expenses when she attended the Cyber Symposium.

Lindell has tried to frame the raid as part of a widespread effort to undermine his attempt to file a lawsuit with the Supreme Court next week. The case, assembled by a team of pro-Trump lawyers, will reportedly argue that China rigged the outcome of the 2020 presidential election.

In a few brief sentences, the high court said it would not consider the case for procedural reasons, because Texas lacked standing to bring it.

“Texas has not demonstrated a judicially cognizable interest in the manner in which another State conducts its elections,” the court wrote in an unsigned ruling.

Happy Thanksgiving, Chief Justice Roberts! The Pillow Man is promising to pay you a personal visit on November 23, after he meets with whichever state attorneys general are craven enough to sign onto a batshit crazy lawsuit claiming the China stole the election for Biden. So get ready for some extra holiday cheer.

For months, the Pillow Pumper has been promising to come up with one or more state AGs willing to appear as plaintiff, triggering the Supreme Court’s original jurisdiction for his Chinese router–packet capture–non-existent IP addresscomplaint. And now HuffPost is reporting, that Lindell has “tons” of takers for his supposedly interstate lawsuit, although he can’t say who for fear of “attacks” by the media.

“I’m not going to give you their names! Are you kidding?” he said.

But never fear, because we’ll find out who (cough, cough Ken Paxton) soon enough. According to HuffPo, Lindell and the state lawyers will meet for a signing party in DC on the morning of the 23rd, after which Lindell will personally march it down to the Supreme Court to be docketed at 9am. No, Lindell is not a member of the Supreme Court bar, or any bar, but surely this will all work out fine.

[O]ver at Salon, indefatigable wingwatcher Zachary Petrizzo confirms that Lindell is indeed planning a pre-Thanksgiving field trip to SCOTUS. He’s also programming a 72- or possibly 96-hour broadcast, starting the Wednesday before Thanksgiving to gin up support for his efforts, during which he will not be sleeping [still on crack?] Buy a pillow on Black Friday, patriots!

And you thought your holiday table was crazy.

How is it that the guys in white coats and a butterfly net haven’t hauled this lunatic off to the looney bin yet?

“[They’re] coming after citizens that have done nothing wrong,” Lindell falsely claimed during an appearance on Steve Bannon’s show on the Real America’s Voice network on Tuesday night.

Lindell claimed, again without evidence, that the timing of the raid was linked to his lawsuit, which he says will be filed with the Supreme Court on Nov 23. Lindell told Bannon that some Democratic attorneys general have signed onto the lawsuit as well, but refused to say which ones.

Lindell then claimed the raid was simply a “marketing” ploy by the government to divert attention away from his lawsuit.

“This is all a big marketing campaign, it’s propaganda,” Lindell said. “Hitler did it, Goebbels was the best at it back in Nazi Germany. It’s brainwashing.”

For the last six months, Lindell has repeatedly claimed to have irrefutable evidence of widespread election fraud in the 2020 election, claims he repeated on Tuesday night when his “interview” with former President Donald Trump was broadcast on his Frank Speech network.

But, despite continually promising that the evidence was about to be produced, Lindell has never shown a scrap of evidence to back up his wild claims.

This Dude is a huckster and a grifter, and a former crackhead (are we sure about that?)

Ron Watkins is a month into his campaign for a Congressional seat, and it’s not going so great. He’s struggling to get the media attention he needs, he has no campaign website, he’s steadily losing followers on Telegram, and his opponents have a huge head start on fundraising.

When Watkins, the QAnon facilitator-turned-MAGA influencer, announced he was running for Congress in Arizona last month, he told VICE News he was pretty confident about his chances.

“Mark my words: I am going to raise at least a million dollars and I’m going to win so that the people have a real voice in Washington, D.C.,” Watkins said.

But it turns out that his Democratic opponent had already reached the $1 million mark before Watkins had even announced his candidacy, according to filings published by the Federal Election Commission (FEC).

Incumbent Democratic Rep. Tom O’Halleran had already raised $1,159,515.71 by the end of September, according to his latest financial report filed with the FEC.

Watkins, who helped QAnon move from a fringe online conspiracy to a mainstream movement that has infected Republican Party orthodoxy, does not have to file his first quarterly financial report, until Jan. 8 under FEC rules.

Since announcing his candidacy, Watkins has focused most of his energy on attacking O’Halleran, calling him the “dirtiest Democrat in the DC swamp” and even giving him the Trumpesque nickname of “Tom O’Hooligan.”

But Watkins may be getting ahead of himself somewhat, given that he first has to win the Republican Party primary that is slated for August 2 next year.

Of the three Republicans currently listed as challenging Watkins for that nomination, sitting Arizona State Rep. Walter Blackman has raised $475,481.07, former Navy Seal and Tucson businessman Eli Crane has raised $404,396.30, and John Moore, the current mayor of Williams, AZ, has raised $30,497.88. Watkins did not immediately respond to VICE News questions about how much money he has raised.

Watkins does not have a campaign website, preferring to use his highly popular Telegram channel, where he has hundreds of thousands of followers, to push talking points and grievances about his opponents.

As well as talking about his Congressional campaign, Watkins continues to use his channel to push a wide variety of conspiracy theories including QAnon, 2020 election fraud lies, and anti-vaccine narratives.

But one open-source researcher who has been tracking Watkins’ Telegram channel following, has highlighted that the number of people subscribed to his channels is falling.

According to the data, Watkins’ subscriber base has been steadily declining in recent weeks, suggesting that his sway over his conspiracy-minded followers may be waning.

While Watkins garnered some media attention when he announced his campaign, he has struggled to get any media outlets to take him seriously. And, in a message posted on the Telegram channel, he asked his followers late last month: “Do you have a podcast? Email me and i’ll consider joining your show if my schedule permits.”

Of course, Watkins may have other things on his mind at this time, after the FBI this week raided the home of the Colorado GOP election official accused of leaking sensitive voter information to him earlier this year.