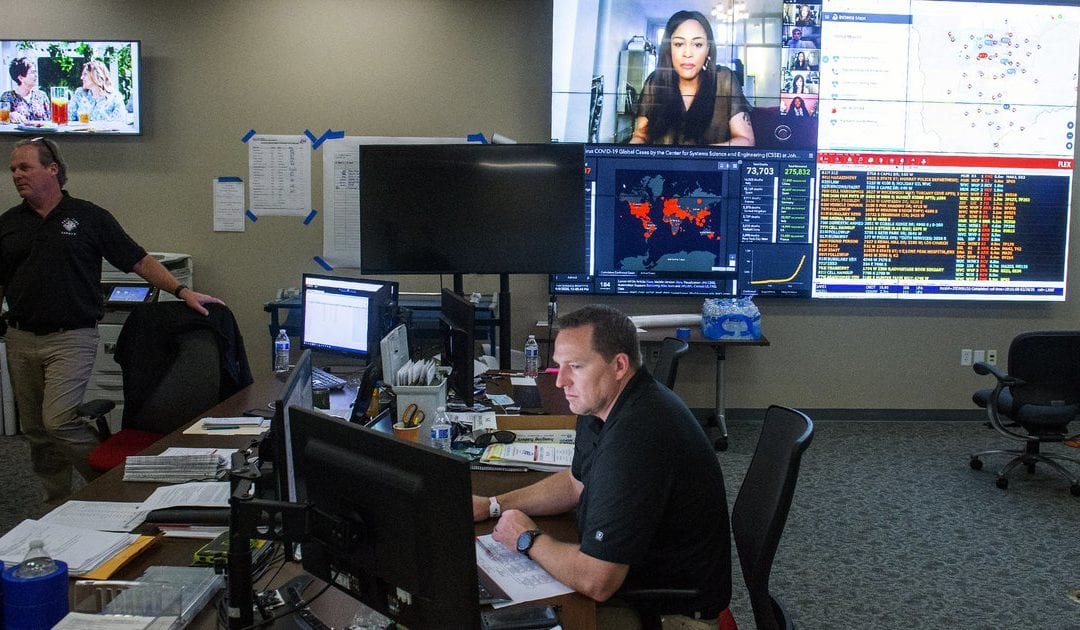 Salt Lake County Emergency Manager Clint Mecham pulled the pandemic response plan off the shelf on Feb. 25 and went to work. That was 10 days before Utah had its first coronavirus case within its borders. But it was clear what was heading our way.

For the six weeks since, it has been all hands on deck — although increasingly on Zoom — as officials from agencies across county government have worked relentlessly to respond to the county’s COVID-19 outbreak.

A raised platform in the county operations center looks over several clusters of desks, each pod covering one of 15 emergency support roles — firefighting, law enforcement, health department, mass care, logistics, communications and so forth.

An array of computer monitors plus larger displays provide the operations section chief — a role typically filled by Deputy Mayor Erin Litvack — with updates on such things as emergency calls, possible hotspots and media updates to enable quick decision-making and immediate response. 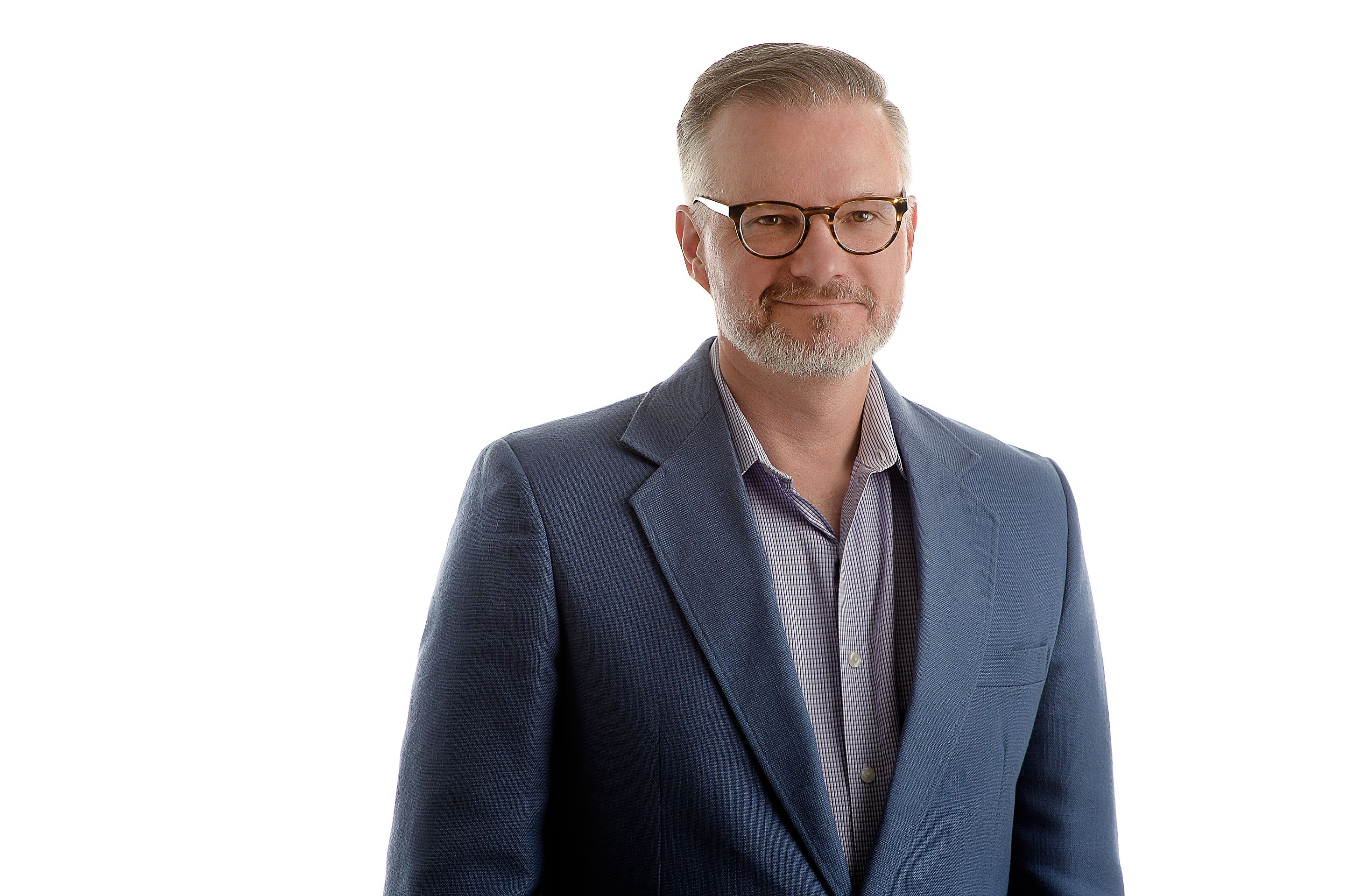 The state has a similar operations center at the state Capitol, led by Department of Public Safety Commissioner Jess Anderson.

The Salt Lake County center was in full swing three weeks ago, when a 5.7 earthquake centered in Magna woke people up. Wilson said she got to the center about an hour later and the response was well underway.

On top of the earthquake, county hazardous materials crews helped manage a spill of 8,200 gallons of hydrochloric acid that leaked from a tank at the Kennecott refinery, creating a plume of gas that was eventually contained.

“It got right sporting. Let me tell you, it was a very busy day, but it was beneficial because we were already kind of in that battle rhythm for COVID,” Mecham said. “So we were able to kind of pivot.”

Patrick Costin, a spokesman for the Unified Fire Authority, said the Federal Emergency Management Agency always runs scenarios where one disaster is layered on another and they seem far fetched, but that’s how that Wednesday morning felt.

These days, the county operations center, located near the jail in South Salt Lake, isn’t the hive of activity it was early on in the coronavirus outbreak. Where 120 people used to physically be in the center on any given day, now there are closer to 50, spread around different offices in order to maintain social distance, while everyone else works remotely. 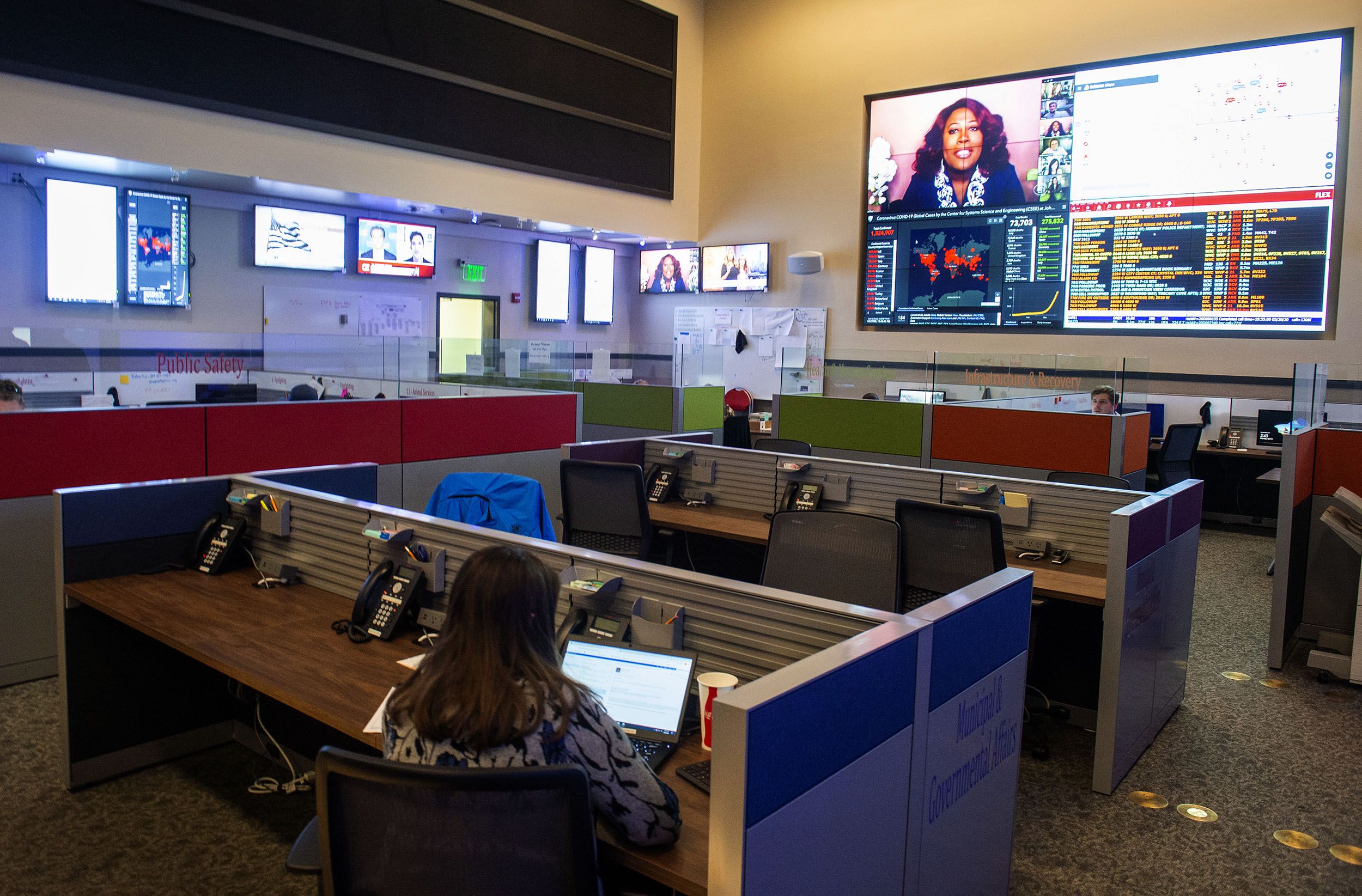 Everyone entering the center has to have their temperature taken and have no symptoms of the disease. Visitors (like me) have to wear masks and several employees wear them, as well.

“It’s not comfortable to fall into a new method of operating, but it’s been critical for us,” Wilson said. “I wish we’d never been in this position … but I know our collective efforts have made a difference.”

As of Tuesday, the county had identified 807 coronavirus infections, by far the highest number in the state, with an average of 50 to 60 new cases identified each day over the past week with a peak of 109.

In the initial stages of the outbreak, the county health department was feeding information on new cases to the intelligence section to create a heat map to show where the infected person lived, but the virus is so widespread that has proven futile.

“Early on it was beneficial, because you could kind of see [the spread] but at this point, it’s not,” said Keith Bevan, the deputy emergency manager. “We never wanted the red dots to touch, but as you can see, now they touch.”

Bevan said they are no longer trying to trace the origin of individual exposures, either, because the virus is too widespread.

David Schuld, the head of the intelligence section, said the county has yet to reach its peak number of new cases. “The next two weeks, as the national models are showing, will really be the trying times.” 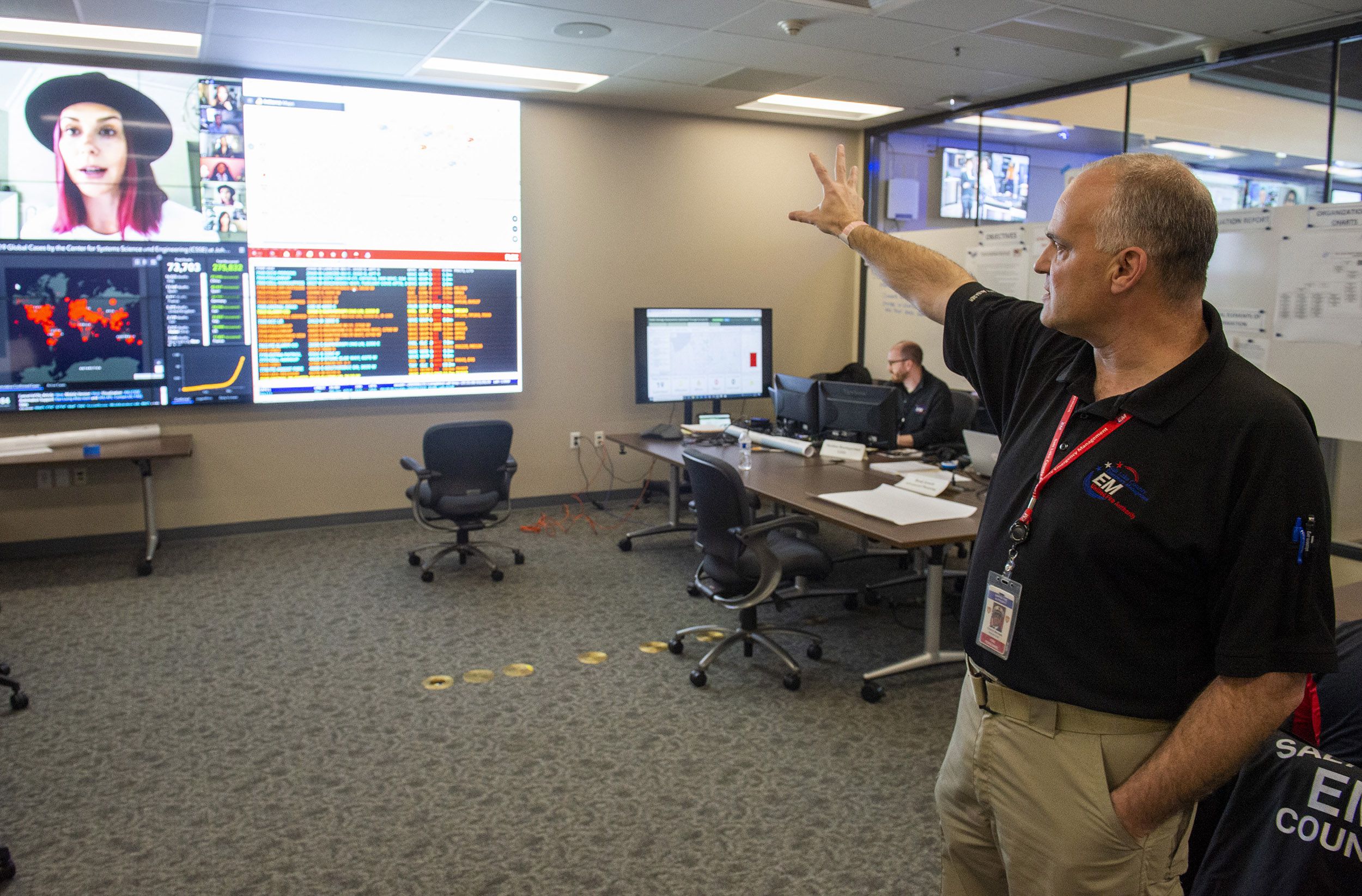 This week, the command center coordinated with state officials to set up quarantine centers and a pop-up hospital at the Mountain America Expo Center. It is coordinating homeless resources with the state and Salt Lake City and trying to deal with outbreaks in a long-term care facility and the county jail.

Coronavirus has presented a different challenge than emergency personnel are used to, Mecham said, but he thinks the team has found a rhythm — one that it will have to keep up for several more weeks, at least.

“We’re used to dealing with those earthquake scenarios or wildfire scenarios, which, you know, even a wildfire, it lasts for a week or so, we’re battling it, and it’s kind of done, it’s over with and we’re dealing with the recovery and getting life back to normal,” Mecham said. “This thing just keeps going and going.”