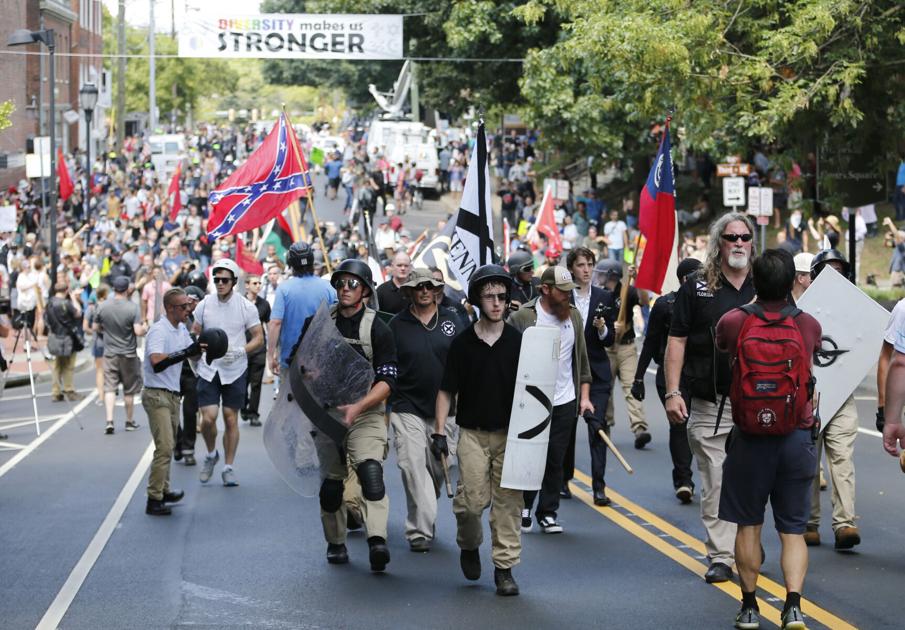 A right-wing group whose 2018 annual conference in Colorado Springs was canceled days after a deadly white supremacist rally in Charlottesville, Va., has failed to show that a statement from the mayor caused the cancellation.

The federal appeals court based in Denver ruled on Monday that VDARE, which the Southern Poverty Law Center has labeled a white nationalist hate group, had not shown that Colorado Springs Mayor John Suthers violated its free speech rights and retaliated against it when he issued a statement pledging no city resources to the conference.

“What VDARE wanted, it had no right to demand — municipal resources to monitor a private entity’s private event,” wrote Judge Gregory A. Phillips for a three-member panel of the U.S. Court of Appeals for the 10th Circuit.

In response, Suthers said the lawsuit lacked merit from the beginning.

On Aug. 11-12, 2017, a Unite the Right rally in Charlottesville that hosted racist and neo-Nazi groups resulted in the murder of one counter protester, Heather Heyer. VDARE had already booked the Cheyenne Mountain Resort for its 2018 conference, but on August 14, Suthers issued a statement in apparent reference to community outcry over the VDARE event.

“The City of Colorado Springs does not have the authority to restrict freedom of speech, nor to direct private businesses like the Cheyenne Mountain Resort as to which events they may host. That said, I would encourage local businesses to be attentive to the types of events they accept and the groups that they invite to our great city,” he said.

“The City of Colorado Springs will not provide any support or resources to this event, and does not condone hate speech in any fashion,” the statement continued. “The City remains steadfast in its commitment to the enforcement of Colorado law, which protects all individuals regardless of race, religion, color, ancestry, national origin, physical or mental disability, or sexual orientation to be secure and protected from fear, intimidation, harassment and physical harm.”

The following night, the resort cancelled the conference.

VDARE filed a lawsuit in December 2018 against Suthers and the city. The group alleged Suthers put participants in danger by promising there would be no help if they were attacked or threatened by protesters, amounting to the government targeting VDARE for its message. It also claimed Suthers retaliated against VDARE for its views and prompted the cancellation.

VDARE described itself and the website it runs as being concerned about “the unsustainability of current U.S. immigration policy and second, whether the U.S. can survive as a nation-state.” (On the same day the 10th Circuit released its decision, VDARE had tweeted, among other things, that “Blacks tend to be America’s hot potato, and liberal northern cities are increasingly adept at dumping their hot potatoes off on the south.”)

A lower court judge dismissed the lawsuit in March 2020. The judges of the 10th Circuit’s panel tried to understand the meaning of the mayor’s promise to “not provide any support or resources.”

“You take that … to mean, ‘We’ve got mayhem out there at the resort, but the mayor’s declared the police shall not respond,’ which is a huge leap,” said Phillips to VDARE’s attorney. “Instead, when I read that, I say, ‘Oh, ok. The police department’s not going to be the private security for this event.'”

Chief Judge Timothy M. Tymkovich agreed, saying Suthers seemed to suggest the city was “not going to declare VDARE Memorial Day or we’re not gonna provide the welcome wagon for the conference. You go from zero to 100 and say, ‘Oh, he’s saying that the city’s not going to respond to a 9-1-1 phone call if there’s a risk of violence.'”

Frederick C. Kelly, representing VDARE, countered that the city cannot threaten to withhold police protection for an event because the government does not approve of the organizers’ message.

“What that would mean is we have murder and mayhem and the mayor has said he won’t respond,” Phillips pushed back. “And that’s not what this language says.”

The city attorney’s office told the panel that there was no allegation the mayor or any city representative had a role in Cheyenne Mountain Resort’s decision. The resort was “concerned with their brand,” William Lamphere said. He called Suthers’ statement “an appeal to the conscience of business owners.”

Writing for himself and Tymkovich in the panel’s majority opinion, Phillips explained that the city had not provided significant encouragement to cancel the conference, and that Suthers’s statement contained no threat to VDARE.

“The Statement didn’t mention VDARE, and VDARE hasn’t alleged that the City ever communicated with it or the Resort or treated it differently than groups with different speech content, such that it was ‘singled out’,” Phillips wrote. “Again, the court cannot just adopt VDARE’s subjective interpretation.”

VDARE had likened its predicament to that of a 1963 U.S. Supreme Court case,  In that instance, a state commission in Rhode Island threatened legal action against the distributors of indecent printed material in an effort to stamp out juvenile delinquency. The Supreme Court ruled that such actions amounted to censorship, but the 10th Circuit’s panel found there to be a vast difference between Rhode Island’s official regulatory actions and Suthers’ statement encouraging businesses to be mindful of the events they host.

The panel determined the mayor was entitled to qualified immunity, which shields government employees from liability unless they violate a clearly-established constitutional right.

The third member of the panel, Judge Harris L Hartz, authored a dissenting opinion. Although he said Suthers was entitled to immunity, Hartz felt his colleagues discounted the inpact of the mayor’s statement.

Jeremy Loew, a criminal defense attorney in Colorado Springs who spoke out against VDARE’s conference in August 2017, recalled being one of a small group of people who did not want “racists and anti-Semites” in the city.

“People were more angry that Cheyenne Mountain Resort, which has always been kind of a pillar of the southwest Colorado Springs community, felt it was appropriate to hold some kind of rally, some kind of an event for a group that pretty openly promoted hated speech,” he said on Monday. “Colorado Springs has somewhat of a libertarian reputation, but at the end of the day, Colorado Springs is also filled with really good people who will continue to say, ‘not in our backyard.'”

An attorney for VDARE did not immediately respond to a request for comment.