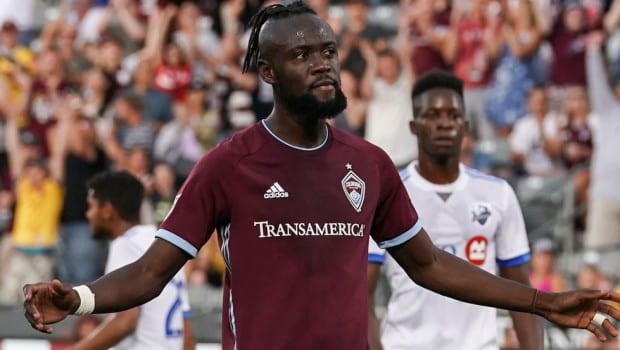 Minnesota United FC have reportedly acquired MLS veteran Kei Kamara via trade from the Colorado Rapids for an undisclosed amount of allocation money and a SuperDraft pick, according to a report from Ives Galarcep. The move was later confirmed by Andy Greder of the Pioneer Press and Rapids head coach Robin Fraser later commented on the trade in a press conference.

Loons head coach Adrian Heath has made no secret of wanting to add forward depth with Mason Toye their only healthy option at the moment, and Kamara would provide a boost even if offseason acquisitions Luis Amarilla and Aaron Schoenfeld return from injury.

I’m told Kei Kamara is being traded to #MNUFC for a package including allocation money and a draft pick.

Big pickup for the Loons, who needed forward depth and land the fifth all-time leading scorer in #MLS history.

Confirmed news: #MNUFC has traded for striker Kei Kamara, with #Loons giving Colorado a yet-undisclosed amount of allocation money and draft pick. @SoccerByIves had it first.

36-year-old is one of leading goal-scorers in #MLS history; he helps Minnesota’s needs at top of attack

Hearing that #Rapids96 will get $150k in allocation money plus a 2nd round pick in 2022 from #MNUFC in exchange for Kei Kamara.

Fifth all-time with 129 goals, Kamara has played in MLS since 2006 and Minnesota would become his eighth different team. He has three goals in nine matches for Colorado this year, though didn’t feature in back-to-back games as the Rapids looked to rediscover their early-season form.

Kamara, 36, would team up with Emanuel “Bebelo” Reynoso, Minnesota’s prized No. 10 signing who officially joined via transfer from Boca Juniors on Sept. 1. A striker who thrives off service into the box, Kamara could also benefit from chances created by Kevin Molino and Robin Lod, or even Ethan Finlay – three of the Loons’ other attacking midfielders.

With Kamara departing Colorado, the Rapids will be turning to Diego Rubio and Andre Shinyashiki as lead strikers. Rubio has two goals in 11 matches this year, while Shinyashiki has one goal in eight matches after winning the winning 2019 AT&T MLS Rookie of the Year award.

Here’s what Rapids head coach Robin Fraser had to say about the move in a media conference call shortly after the news broke:

“I think for a long time we’ve considered how we want to further incorporate youth into the group and certainly going forward we like Andre Shinyashiki a lot. We like Diego Rubio a lot and it just became evident that it was the right time and it’s the right time for both parties,” Fraser said. “I wish Kei well and I think he’ll do really well at Minnesota.

“It’s certainly a longer term view in looking at getting Andre Shinyashiki and Diego more time in the competition and more specifically between the two of them. In terms of acquiring a player [in the transfer window which closes Oct. 29], at the end of the day we want to make sure it’s the right player and if we don’t feel as if we have the exact ideal player in the next month, then it’ll be out in the future.”

Minnesota are 2W-4L-0D since the MLS is Back Tournament, and are looking to make the Audi MLS Cup Playoffs for the second year running. Colorado have similarly struggled, winning once in their last nine games. Both teams are in the 12-team Western Conference, which will send eight teams to the playoffs this year instead of seven.