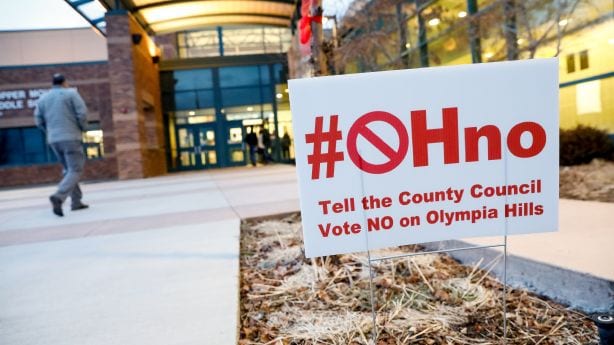 SALT LAKE CITY — As COVID-19 continues to spread across Utah, going door-to-door gathering signatures for a citizen referendum remains out of the question.

“Citizen initiatives are an important part of our democratic process here in Utah,” Herbert said in a prepared statement. “This order creates a path forward for the signature gathering process for referenda while preserving the requirement for handwritten signatures.”

That’s good news for Utah for Responsible Growth, the citizen group that launched a referendum aimed at halting the proposed Olympia Hills development in Herriman. On Tuesday, the Salt Lake County Council approved the referendum, giving the group a 45-day window to collect 82,000 signatures.

“This is what we needed, it rejuvenates us,” said Lorin Palmer, a founding member of Utah for Responsible Growth. “We still have a huge task in front of us, don’t get me wrong, it’s monumental.”

A referendum sponsor can now “distribute and gather referendum packets and physically signed signature sheets electronically, including by fax or email,” the order reads.

Herbert’s order is similar to the one he issued in March which allows political campaigns to gather signatures electronically ahead of the June primaries. Voters can now print off an online form to sign and send back, either electronically or by mail, eliminating the need for in-person canvassing.

There are pros and cons to this.

Even with Herbert’s order, members of Utah for Responsible Growth have to get creative if they still hope to gather 82,000 signatures. On Thursday, Palmer told KSL his group is gearing up to launch a widespread social media and email campaign.

“There are pros and cons to this,” said Palmer, who thinks that by gathering signatures electronically, his organization can cast a wide net and reach more people than by canvassing.

“But then we’ve got to focus more on marketing online … we’re going to have to rely on people clicking on something on social media or in an email that we send out,” he said.

The controversial development has faced backlash for much of the past two years. The original application was vetoed by then-Salt Lake County Mayor Ben McAdams in 2018 after the County Council voted to move forward with the development. The veto prompted developers to submit a revised application that scaled the proposal back from 8,700 units on 933 acres, to 6,300.

Despite council members Aimee Winder Newton, Steve DeBry and Richard Snelgrove voting against the development, on March 3 the Salt Lake County Council approved the revised plan in a 6-3 vote.

But the revisions have done little to sway the lack of public support, which came to a head in early March when county officials and Utah for Responsible Growth kicked off the referendum to stop Olympia Hills. Days later an application was submitted to the Salt Lake County Council, which required 20 days to deem the referendum legal.

A lot happened during those 20 days. With the coronavirus dominating headlines, Palmer said support for the referendum, which received a raucous standing ovation when it was unveiled just a few weeks ago, has quieted.

“We were considering not even moving forward with this. … I’m not going to deny that we’ve lost momentum,” Palmer said. “But at the same time we decided as a group that we need something to keep our mind off of everything else.”

But now, with a green light from both the county and the governor, it’s full steam ahead for Utah for Responsible Growth. With the deadline set for May 14, Palmer and other Olympia Hills opponents are urging county residents to stay involved.

“(Coronavirus) is going to be detrimental, we’re not trying to downplay it at all, but I think this will pass,” he said. “If Olympia Hills goes through, that could impact us for 25 years.”