Rattlesnake season 2020 is arriving in Colorado — so be careful, hikers 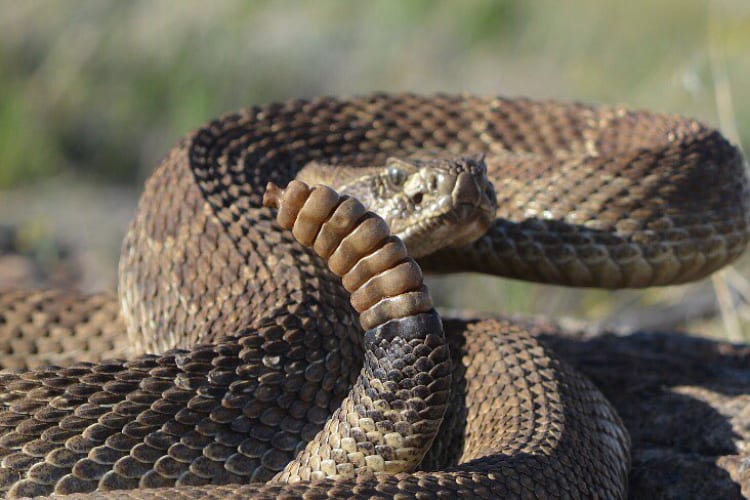 Rattlesnake season across the Front Range doesn’t really arrive until early May, but you might want to watch where you sit if you’re taking a rest while out hiking on a warm day before then.

There was a rattlesnake sighting on Green Mountain in Lakewood on April 5, a warm, sunny day when lots of folks with coronavirus cabin fever were out recreating. Temperatures along the Front Range are expected to reach into the 60s this week, so it could happen again.

Rattlesnake expert Mary Ann Bonnell, who is the visitor services manager for Jefferson County Open Space, said rattlesnakes aren’t likely to stray far from their winter hibernation dens until May when the “snow-heat-snow-heat cycle” that is common in spring has abated. When that ends, they will be more active as they begin moving to their summer foraging areas.

But they will come out of their winter dens before then on warm days to sun themselves on trails, which are warmer than areas with a cover of vegetation, Bonnell said.

“So, if you sit down to have a picnic on a rock, and you happen to be right next to a wintering den, you may encounter rattlesnakes on a warm, sunny day,” Bonnell said.

Even so, Bonnell said it’s important to stress that snakebites are extremely rare. From 2015 through 2019, six snakebites were reported at Jeffco Open Space Parks.

“Considering that we have seven million visitors estimated annually,” Bonnell said, “that’s not a lot of bites.”

Still, if you’re recreating in rattlesnake habitat on a warm day, you need to be on your guard. If you are bitten, Bonnell advises you to stay where you are, call for help and wait for first responders to carry you out on a wheeled litter. Walking out on your own is a bad idea because it will elevate your heart rate and increase the circulation of the snake’s venom in your body.

And if you need to be evacuated, of course, that’s another area of concern for open-space managers and first responders coping with the coronavirus threat. For wheeled evacuations, Jeffco typically wants two or three of its rangers assisting emergency medical responders from the fire district that has jurisdiction for the location of the emergency. That means 10 to 11 people could be involved in the rescue.

“You don’t always have that luxury,” Bonnell said, “but you want someone ahead, spotting rocks, calling out hazards; a certain number of people helping to steady the litter; then someone at the back making sure no one comes up from behind (such as) a mountain biker or trail runner moving quickly.

“As you can imagine, in a wheeled-litter situation, there isn’t social distancing. That’s not really an option.”

Crews work on the assumption that the victim may have the coronavirus, so ideally they will be wearing N95 masks. The victim is likely to be issued a surgical mask so rescuers are protected from sneezes or coughs.

And there’s another coronavirus consideration. “The patient will go to the hospital,” Bonnell said.

To avoid being bitten, Bonnell recommends wearing high-top boots and long pants when hiking in rattlesnake habitat because the most common place for a rattlesnake to strike is the inner ankle area. As a rule of thumb, Bonnell said the strike distance of a rattlesnake is two-thirds of the length of its body. Front Range prairie rattlesnakes are usually 3 to 4 feet long.

“I always assume I’m dealing with an athletically gifted snake, so I give them three to four feet,” Bonnell said. “I want to err on the side of caution.”

If you encounter a snake on a trail, it’s best to wait for it to move away on its own. Do not throw rocks or prod it with a stick, because that will make it angry and want to strike. And when a rattlesnake is agitated, that’s when it can strike the farthest and administer the most venom.

If you decide not to wait, Bonnell recommends carefully going around the snake a few feet off the trail, making sure you’re not stepping on one of his pals. If you have a walking stick, test the ground in front of you to make sure you’re not startling a snake hiding in the grass.

“And you want to keep your eyes on the snake,” Bonnell said. “If it starts to track you (visually) and rear up, that’s a good time to just stop moving and let it calm. It may even move off the trail at that point. If it’s tracking and rearing up, that means it’s getting ready to strike. You don’t want to be in motion if that happens. I would give the snake space and time. If it’s getting riled up, stop moving.”