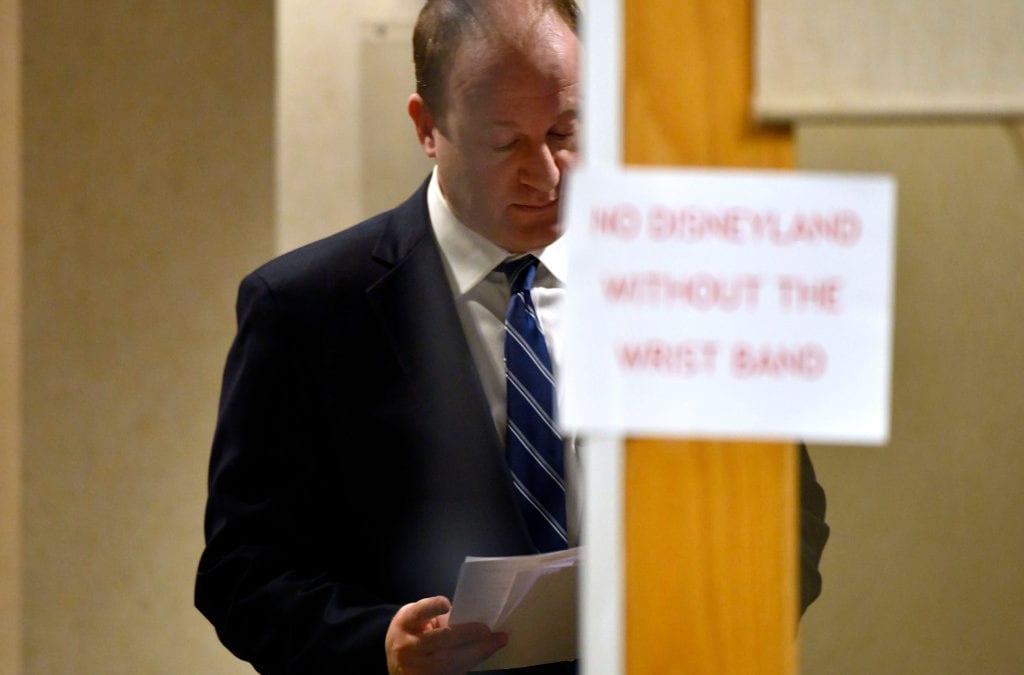 It’s been four weeks since Colorado Gov. Jared Polis announced the state’s first known cases of the new coronavirus. “Don’t panic,” he urged that day. When asked if citizens should change their daily routines in any way, Polis said, “I don’t plan on changing mine.”

He hadn’t seemed too concerned about the virus up to that point. One week before announcing the first case, he’d held a press conference at the Capitol to tout his administration’s health care work, and at the tail end of that event he was asked about the coronavirus. Colorado isn’t stressing over it, he suggested at the time, adding that he would be in touch with the White House as things changed.

That feels like a lifetime ago, and we’ve seen a completely different Polis in the last few weeks.

As of this interview, Colorado had more than 3,300 known coronavirus cases, 80 deaths and more than 600 people hospitalized. Polis has shut down nearly every non-essential activity and business in the state, and remains very worried about Colorado’s shortage of medical supplies and staff. He’s said he’ll talk to anyone and everyone, from Colorado to China, who might be able to help the state prepare for a surge of COVID-19 hospitalizations that experts here predict could land as soon as this month and as late as July.

His voice has gone hoarse from all the shouting at press conferences and the nonstop calls, he told The Denver Post during a 15-minute interview Wednesday at the state’s emergency operations center in Centennial. His eyes were nearly closed for parts of the conversation.

This interview has been edited for clarity and brevity.

How are you? Have you slept much recently?

It’s crazy for all of us. I’m on a series of calls and conference calls all day and night, looking at presentations and updates on my computer and on my phone, just trying to stay on top of things as we navigate through this crisis, and try to do it in a way where we can reduce the economic slowdown and save lives.

Yesterday, I telecommuted from my home office and we were able to take one walk around the neighborhood with our kids and dog to get them outside, to get us outside, get some exercise. We walked about a mile and a half. But mostly I’m just — you can tell I’m a little hoarse, just from talking so much. Listening, talking, listening, talking. Every day is a series of calls and virtual meetings, all day and night, as we try to do everything from acquire masks to increase hospital beds to increase compliance with the stay-home (order) and figure out the nuances of it, to address different legal questions, to the normal business of the governor. I signed a number of bills today and the rest of the state has to continue to function, too. We had a snow event a few days ago. Not a major one, but we had to get all the snow plows out. That sort of thing.

When did you realize what a crisis this would be?

When it really became serious is when we saw that people that had no connection to a traveler, or no connection to traveling themselves, and that it was spreading between people in our communities, as at that point we had seen in Italy and other countries. As soon as we saw that community spread (Polis announced that on March 13), we started taking these social-distancing actions. I think one of the key ones was, before St. Patrick’s Day, we closed down the bars. Thank goodness we did. I know in Louisiana they deeply regret not canceling Mardi Gras.

You’ve mentioned you’ve had conversations with Pence and Trump. What are you telling them, and what are you hearing back?

I’m in touch regularly with anyone who can help. The head of the CDC connected me to the CEO of (private testing lab) LabCorp. We’re talking to anybody who can help, all the time, anytime. Of course that includes the vice president, people at the Pentagon.

And the frustration you’ve conveyed to them concerns a lack of supplies, right?

Yeah, and it’s also about a lack of specifics. Certainly everyone is polite, but what we really need is: What can you get us? When can you get it to us? We have very little visibility into that. If you’re not going to get us any ventilators, tell us now. We have to assume that’s the case. While people aren’t saying no, they aren’t giving us any timeline, or delivery.

It seems like it’s a very chaotic response, but we’re trying to provide as much order as we can to save people’s lives in Colorado, and we would love the federal government to step up and help.

Colorado Gov. Jared Polis during his press conference updating the state’s response to the coronavirus outbreak at the Colorado State Emergency Operations Center on Friday, March 27, 2020.

You’d mentioned in your last press conference that the doubling time in Colorado for new coronavirus cases is going down. How can we have confidence in those numbers if, by your own admission, there are thousands or tens of thousands of people in Colorado who have the virus who we don’t even know about?

We see the number of beds we’re using every day. The frustrating part is that’s a trailing indicator — usually four or five days to exposure and then often another seven or eight days to hospitalization. We need to track that, and we need to grow for that, because that’s the pinch point. It’s not how many people have the virus, or have had it. It’s about who needs a bed now, at any given time, who needs a bed in a week, in two weeks, who needs a ventilator, who needs oxygen, who the caregivers are.

But what are the experts telling you about how many people have coronavirus here, or have had it?

The number of people hospitalized today should be somewhere around 5% to 10% of the people in our state who had coronavirus eight days ago.

What’s your best guess at this point about when the peak will hit Colorado?

We simply haven’t seen the data and the information about how successfully people are staying at home. We have some proxies, we see traffic data, things like that. We have seen the impact from closing the bars and restaurants, the closure of the schools. We will have real data on exactly what’s being achieved in the next week.

So you don’t have a sense of whether it’ll be May versus June versus some time in April?

Well, the hope is that if people are successfully staying home, we’re pushing back that peak, giving us more time to prepare beds and acquire the ventilators so Coloradans don’t die from lack of medical supplies.

If we’re pushing off the peak, does that mean we’re also prolonging the amount of time we’re under distancing orders?

No, the reason for the distancing order is to delay the peak so that we can scale up our medical system and have the beds we need so that Coloradans don’t die from lack of medical care. Once we have those beds, we’ll be able to treat an increased caseload, no matter how long the crisis lasts.

But if the peak hits on, say, June 1, is it really possible people could be back at work and in restaurants then?

I know you’ve said you won’t make decisions on April 1 about a stay-home order that expires April 11. The city of Denver is ready to extend the order today.

We want to make any decision with enough time to implement it, but we want to have as much real data as we can to inform that decision, because this is two crises. It’s the health crisis, but it’s also the economic crisis. The longer you prevent people from being able to earn their living legally, two things happen: one, the more damage it causes when they do go back to work and two, it encourages illegal activity because people have to support themselves.

Rent is due this week. You’ve said previously that landlords have a natural incentive to retain tenants and that the state won’t facilitate evictions. The messaging we’re seeing from landlords, though, is remarkably diverse — everything from threatening to pursue evictions and charging late fees to offering payment plans and rent reductions. You must know by now there are a lot of people calling for a rent freeze in this state. Is that something you’ve given any thought to?

We’re using all of our executive authority in terms of not using any state resources around evictions, and I don’t think any law enforcement agency in the state is enforcing evictions. If you hear of one, please let us know.

But the concern is that evictions will restart at some point. People are worried about the floodgates opening.

You can’t control what landlords are threatening. I’m sure there’s some really bad landlords saying they’ll evict you. That is false, unless there’s a public safety dimension to it — if somebody’s running a meth house or engaging in dangerous activity, those emergency eviction orders would be processed. But an eviction for nonpayment in Colorado should not be processed during this 30-day period.

What about 60 days from now? Say I’ve lost my job, and I’m unable to pay. I might get evicted when this cloud lifts.

This is for 30 days that we’re operating now. Obviously depending on where the crisis is, and whether people are returning to work, we’ll look into extending that.

There are a lot of people in Colorado who are teetering now on homelessness, or descending into poverty.

You’ve said it’s your hope that we can have a transition phase after this one of a new, semi-normal. What’s your ideal timeline for when that happens, and what will it look like? You’ve mentioned restaurants having new spacing.

Ideally it would’ve been yesterday or last week. We’ve seen countries operating under the pandemic with close to normal productivity, like Korea and Taiwan, much more successfully. Because America didn’t have the testing and procedures in place when this began, we have to use the broader steps that have been used across Europe and other countries to reduce the spread of the virus. But as soon as we can return to normalcy, with additional health parameters, we will. Hopefully Colorado can be among the first states that are able to do that.