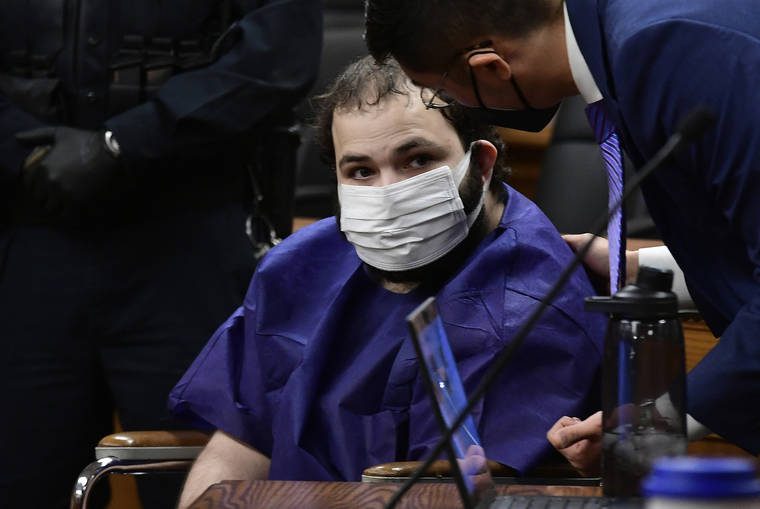 The high-capacity magazines were banned in Colorado after the 2012 mass shootings at a suburban Denver movie theater and at Sandy Hook Elementary School in Connecticut.

Although the magazines can’t be sold, people in the state can still buy the parts for the magazines at some gun stores and assemble them on their own, at which point it is illegal to possess them.

The magazines were found on Alissa and in a car parked outside the King Soopers store in Boulder after the March 22 attack, Dougherty said. He declined to say how many unused bullets investigators recovered and did not say how many bullets the magazines seized could hold.

Investigators have still not determined a possible motive for the attack. There is no indication that Alissa, who is from the nearby suburb of Arvada, had ever visited the supermarket before the attack, Dougherty said.

Besides the murder charges Alissa was originally charged with, Dougherty said his office has filed more than 40 new felony charges against Alissa, including attempted murder charges involving responding police officers and shoppers.

A court document made public Wednesday outlines the new charges and lists 19 new victims — including 11 law enforcement officers — that Alissa is accused of trying to kill during the attack.

Some of the victims have more than one count of attempted first-degree murder associated with them, specifying two different theories for how Alissa allegedly tried to kill them, either intentionally or through “extreme indifference” to human life.

Dougherty said investigators have determined that nine people in the store were killed before responding police officers entered it. One of those officers, Eric Tally, was the 10th murder victim, the prosecutor said. A second wave of officers stormed the store within 30 seconds and took Alissa into custody after he was shot in the leg.

At least 115 people were in the store during the attack, and at least 25 more were in the lot where Alissa parked before entering the store, Dougherty said.

Colorado lawmakers in 2013 banned the sale of the high-capacity gun magazines. But an investigation by KUSA-TV found that some Colorado gun shops skirted the law by selling disassembled parts of the magazines.

High-capacity magazines allow a shooter using a semi-automatic weapon to fire more bullets before pausing to reload. The Sandy Hook shooter had several 30-round magazines, while the Aurora movie theater shooter used a 100-round drum magazine.

Dougherty did not say how or where Alissa obtained the magazines. Investigators are trying to determine whether they were sold whole or were “modified at a later point,” said Shannon Carbone, a spokeswoman for the Boulder County District Attorney’s Office.

Boulder investigators have said Alissa legally purchased a Ruger AR-556 pistol used in the attack, which resembles an AR-15 rifle with a slightly shorter stock. He bought it six days before the shooting after passing a background check.

Drew Eddy, an attorney for the Eagles Nest Armory gun shop where Alissa bought the AR-566 pistol, declined to comment when asked if Alissa purchased any parts from that store that could be assembled to make a large-capacity magazine.

Democratic state Rep. Tom Sullivan, a gun control advocate, said the 2013 high-capacity magazine ban clearly prohibits individuals from building their own devices. Sullivan said the issue of parts sales has been discussed at the state Legislature.

“Assault weapons get the attention. But it’s the magazines that are the greater problem,” said Sullivan, whose son Alex was slain in the Aurora shooting.

Colorado Attorney General Phil Weiser argued that the law “clearly states that it applies to parts kits” in successfully defending the ban before the state Supreme Court in 2020, spokesman Lawrence Pacheco said.

Be it tackling high-capacity magazines or homemade “ghost guns,” a national approach to gun violence would have the greatest impact, said Democratic Sen. Majority Leader Stephen Fenberg, who represents Boulder. “A state policy here won’t be most effective if you can drive an hour into Wyoming and be under another set of laws. But that doesn’t mean we shouldn’t act as a state.”

Alissa’s next court date is May 25. He has not been asked to enter a plea yet. His team of public defenders has asked for time to evaluate what one of his lawyers cited as his “mental illness” without offering any details about the condition.