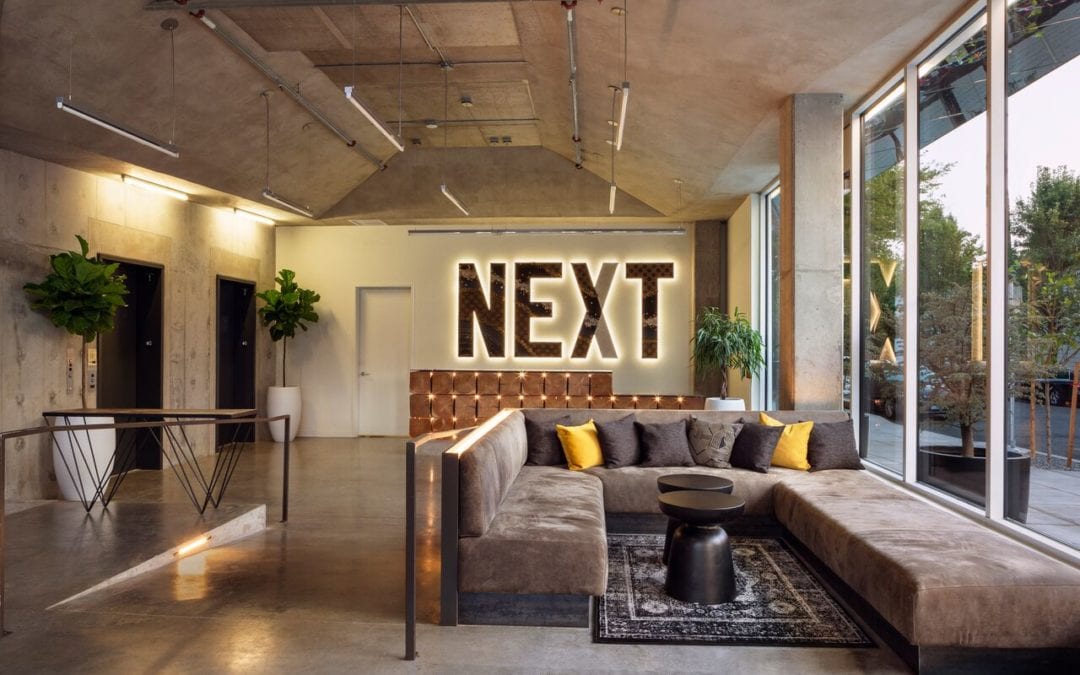 Despite the cannabis industry’s multi-million-dollar boon, the hospitality industry has been anything but hospitable to cannabis, even in legal states. Still as boons go, the numbers are staggering: In Colorado, for instance, cannabis tourism has grown 51 percent, while the state has garnered more than since legalizing cannabis for adult use in January 2014. And in newly legal Canada, according to a 2018 , overall consumption is expected to rise 35 percent, and national industry sales are projected to reach C$7.17 billion (US$5.35 billion) in 2019. (By comparison, Canada has a population of 36 million, and Los Angeles County has a population of 39.5 million. Although there are no reliable estimates for LA County, pot sales are estimated to reach $6.59 billion by 2025.)

Not to name names, but having reached out to all the luxury hotels in Portland, Oregon — which is not only the epicenter of craft cannabis, but arguably the country’s most liberal city — I learned that not even one in ten of those 4-star hotels offers any information about cannabis to their guests. What, as if rich people don’t get high? They certainly do: Not only do cannabis consumers skew older, since legalization, but in the ultra-wealthy resort town of Aspen, Colorado, for instance, cannabis sales have already exceeded alcohol sales.

In fairness, the reasons for hospitality’s disconnect from cannabis hinges largely on the federal banking system’s chokehold on cannabis companies, and the fact that public consumption remains illegal, even in states that legalized pot. And while there’s certainly been a push within each legal state to allow special events and/or designate public consumption spaces, so far, no joy (with a few minor exceptions, like ). That means private tour companies are left to navigate their own regulatory entanglements in a patchwork of legal states and cities — albeit still taking advantage of opportunities the hospitality industry is missing out on.

While they can buy weed legally, cannabis tourists especially (i.e. those without their own private residences in legal jurisdictions) need space to consume openly and outdoors — or at least outside their hotel rooms. However, many states including those like Colorado have bans on smoking (cannabis or tobacco) indoors, thanks to measures like the Clean Indoor Air Act. Hence, we’ve seen the rise of tour buses in legal states, providing cannabis consumers safe spaces — literally — to socialize with each other, catch a ride around town, and, of course, smoke a joint.

Despite not being allowed on TripAdvisor, Denver’s is rapidly expanding their programming to offer classes like Sushi & Joint Rolling, Cannabis Wellness, and even two-night packages at 420-friendly lodgings. Another top-rated Denver-based outfit, openly addresses the issue on their website. The “420-friendly” hotels they work with prefer not to be named for a variety of legal reasons, and are only identified when a guest books a reservation at that hotel.

But even so, the question remains: Given the stated limitations, what exactly makes any of these hotels 420-friendly? The answer is vague at best.

Of course, there are places like , a bud & breakfast located in the San Jacinto Mountains, home to the colorfully-themed “Room #420,” “Mondo Trasho” and “Dolly.” Named to Fodor’s list of the world’s most fabulous hotels, Hicksville allows cannabis smoking in the guest rooms, but “no tobacco or crack.”

The irony, of course, is that the hotel industry is in a tailspin, as they adapt to the cultural shift toward the Airbnb-inspired share economy. As travelers today demand authenticity, customization, creativity, and transformation, cannabis in fact could be the ideal business partner for players in the hospitality industry, just as it’s been for those in industries like or s. Truth be told, by and large, hotels today aren’t “420-friendly” so much as they are “420-look-the-other-way.”

There is one exception, however: Having built their reputation for being the go-to accommodation for the likes of skaters, billionaires, and billionaire skaters, Portland’s has been among the few truly 420-friendly hotels to embrace cannabis as early as 2015 with a ground-breaking 420 package.

Now with the addition of Jupiter NEXT, Jupiter’s guests have an upscale option that’s broken ground post-legalization, designed specifically to accommodate open consumption in the hotel — a fitting turn, given that Jupiter (built on Portland’s once-notorious “Heroin Alley”) was the original home base of , offering budtender education with a feminist slant.

Given Jupiter’s cultural and geographical positioning, Civilized spoke with assistant general manager Nick Pearson and director of sales and events Julie Davies about integrating cannabis into the hospitality industry and what’s next for Jupiter NEXT.

Civilized: When you think “cannabis tourism,” what comes to mind? What would that experience be in your mind?

Pearson: My hope is for “cannabis tourism” to extend beyond simply purchasing and consuming, and to move toward the inclusion of education, as well.  Like in the wine industry, drinking wine while traveling doesn’t make you a “wine tourist.” Going to a winery, learning about how they grow their grapes, being exposed to their wine-making process, and then finally tasting the wine is what sets the “wine tourist” apart from the “wine drinker.” Because cannabis farms and processors are not allowed to conduct public tours, there is a massive educational piece missing. I would like to see that bridge gapped as soon as possible to feed those tourists who crave knowledge around the products they consume.

Civilized: And when you think “cannabis tourism,” what companies in hospitality come to mind?

Davies: Obviously, the Jupiter Hotel is first on my list, as we are able to provide an “Everything but the Weed Kit” in our 420 package, available at our original Jupiter Hotel. Grön Chocolates, whose unmedicated chocolates are on each and every pillow at Jupiter NEXT, recently opened the country’s first CBD café in SE Portland that should be a great new addition to the cannabis tourism scene. High 5 Tours runs cannabis-friendly bus tours. Those businesses aside, Portland’s small but mighty cannabis tourism scene can definitely stand to see some growth in other hospitality sectors.

Civilized: What’s your professional take on the hospitality industry’s relationship toward the cannabis industry?

Pearson: I think that while the attitude is changing rapidly, the industry overall has been really slow to get onboard. The Jupiter has never been in the business of telling people how they should enjoy their time in town, so it has been our aim to offer as many opportunities to explore “cannabis tourism” as possible. We’ve made sure to partner with our favorite dispensaries in town ( and ), to provide our guests with reading material on the latest trends and articles in the cannabis industry (Oregon Leaf Magazine), and to host a number of cannabis-related events over the last few years. We’d love for other hotels and hospitality companies to get in on what is clearly a massively growing industry in our city.

Civilized: As far as legal consumption in hotels, please explain what’s legal for guests in the privacy of their own rooms? Or rather, what is not legal?

Pearson: From a strictly legal standpoint, a hotel room is a private space and therefore a guest can consume cannabis. However, you run up against hotel policy about whether the room itself allows smoking of cannabis. Cannabis is not allowed to be consumed on public property, so that means our public spaces are unfortunately off-limits.

Civilized: Let’s talk about the different cannabis packages that Jupiter Hotel has offered and the relationships you’re developing with cannabis now?

Pearson: We offer one cannabis package at the Jupiter: “The 420 Experience.” As the hotel cannot actually provide any cannabis products that contain THC, the package includes the “Everything but the Weed” kit. We partnered with Jayne, who provides a nice starter kit, including everything from rolling papers to a grinder. It also includes a vape pen, a discount to Jayne to actually purchase cannabis, Oregon Leaf magazine, a Jupiter T-shirt and some munchies, including a discount to After Dark Cookies, who will deliver late night fresh baked cookies. We also have partnered closely with Grön Chocolates and have their CBD chocolates available at Jupiter NEXT, as well as an unmedicated version of their chocolate in every room.

Civilized: In a tale of two hotels, it’s ironic that your 420 package is currently only offered at the Jupiter Hotel, which was built during prohibition. Whereas Jupiter NEXT broke ground post-Oregon legalization and was built in anticipation of open consumption becoming legal, but that hasn’t yet come to pass. So could you talk about building a hotel right up to the legal line and the waiting game you’re facing now?

Davies: It will be really interesting to see how the legislation surrounding consumption changes. As the indoor clean air act does not allow for smoking indoors, and is unlikely to change, from a tourist perspective, we are hoping for a change to the definition to what is a private versus public space. Jupiter NEXT has over 2000 square feet of outdoor space that is available to guests, including our public-friendly Secret Garden and guest-only Fresh Air Porches on every floor, so should there be a legislative shift. We have several comfortable outdoor spaces for guests to consume.

Civilized: If a guest wanted an excellent weekend of cannabis tourism in Portland, the best of the best, what would you recommend?

Pearson: First, stop in at Hey Love Superette for a CBD Mocha Latte, featuring GrönCBD, to kick off your morning right. Head over to Jayne to grab all your necessary accessories (and the cannabis that goes with them), and be sure to check out the edibles available at dispensaries like (a stone’s throw from the Jupiter), as well as the beautiful design in Serra’s shops in NW and SE Portland. Then, grab your goodies and head out on a , which is a guaranteed great time.