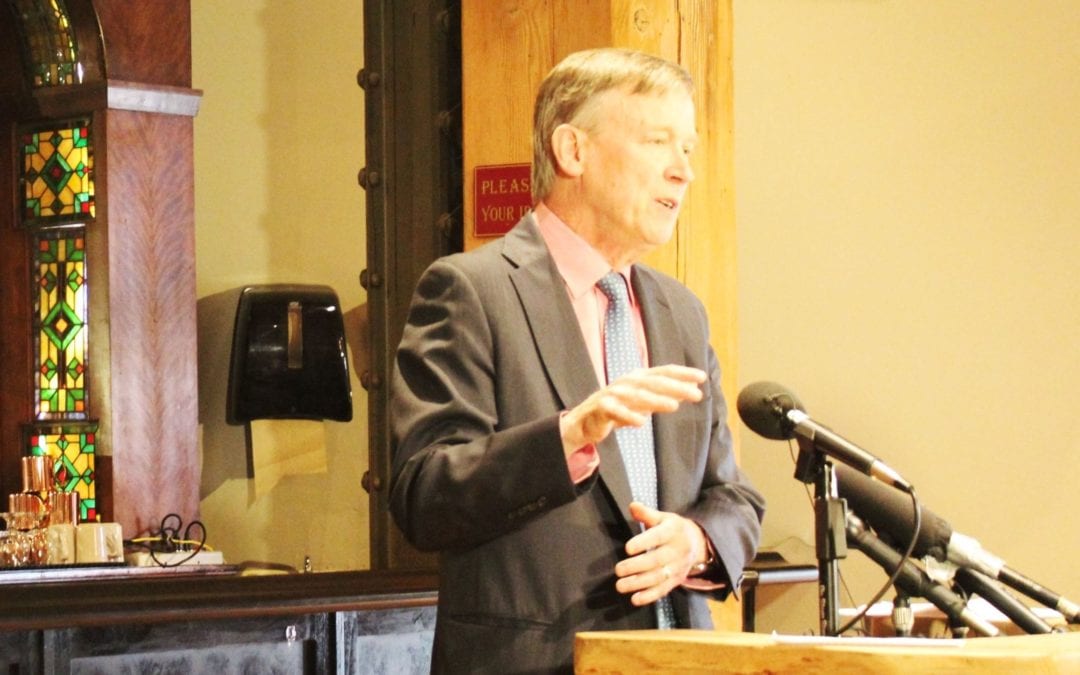 “The people need to pay for what the people want, and the state needs to pay for state business,” said Commissioner William Leone during a virtual hearing on WebEx.

Hickenlooper faces potential penalties for accepting a ride on a private jet to the commissioning of the USS Colorado in Groton, Connecticut, and for accepting complimentary travel arrangements while attending the Bilderberg Meetings in Turin, Italy. Both events took place in 2018, at the end of Hickenlooper’s second term as governor of Colorado.

Amendment 41 of the Colorado Constitution bans elected officials from accepting gifts except from personal friends on special occasions. While Hickenlooper was in office, any freebies were capped at $59.

In addition to taking six trips on private jets, the complaint alleged Hickenlooper accepted complimentary stays in luxury a hotel, travel in a Maserati limo, and various meals while attending the 2018 Bilderberg Meetings in Turin, Italy.

Hickenlooper said he paid $1,500 to attend the conference, believing it covered the cost.

“Rather than follow the principles set forth in the Constitution, he traveled the country in violation of Colorado’s ethics laws,” Staiert said during her closing argument. “He took corporate jets to mingle with billionaires and the world’s elite.”

While Staiert asserted that the travel arrangements appeared questionable, Hickenlooper said he accepted travel as a gift on special occasions from personal friends, as allowed by the rules. He defended friendships with business owners who he said helped secure housing for the homeless and build the state’s economy.

After Commissioner Debra Johnson asked Hickenlooper if he was able to take personal leave while on the job, he said it was a 24-hour job.

“My job was to go out and sell Colorado. Every day I was looking for opportunities to drive the cause for Colorado, and it’s hard to describe how competitive it is out there,” Hickenlooper said.

Grueksin countered that the Public Trust Institute’s claims against Hickenlooper were steeped in rhetoric rather than the evidence.

“We set a dangerous precedent where you can say, ‘I didn’t know,’ and that’s a defense. That seriously guts this amendment,” Commissioner Leone said. “It’s part of being an elected official in Colorado that you have to be vigilant.”

The commission concluded the nine-hour hearing by tabling the discussion of possible penalties to the next meeting.

On Thursday, the commission voted to hold Hickenlooper in contempt after he failed to appear on a subpoena. Hickenlooper attempted to quash the subpoena through a petition filed in the Denver District Court, which was denied June 3.

While Hickenlooper may be held liable for twice the amount of the value of the gifts received, the bigger question is whether this will overshadow his bid for a hotly contested Senate seat.

“The Republicans who launched these attacks pursued 97 allegations and the commission dismissed 95,” said Melissa Miller, communications director at Hickenlooper for Colorado. “We fully expect the special interests who’ve exploited this process to continue to mislead Coloradans with negative attacks because they know John Hickenlooper will be an independent voice in the U.S. Senate.”

A two-term mayor of Denver and two-term governor of Colorado, Hickenlooper withdrew a bid for the White House last year. In August 2019, he launched a campaign for the U.S. Senate and is running against former Colorado House Speaker Andrew Romanoff in the state’s Democratic primary on June 30.

The seat, considered an important battleground for Democrats, is currently occupied by Republican Cory Gardner.