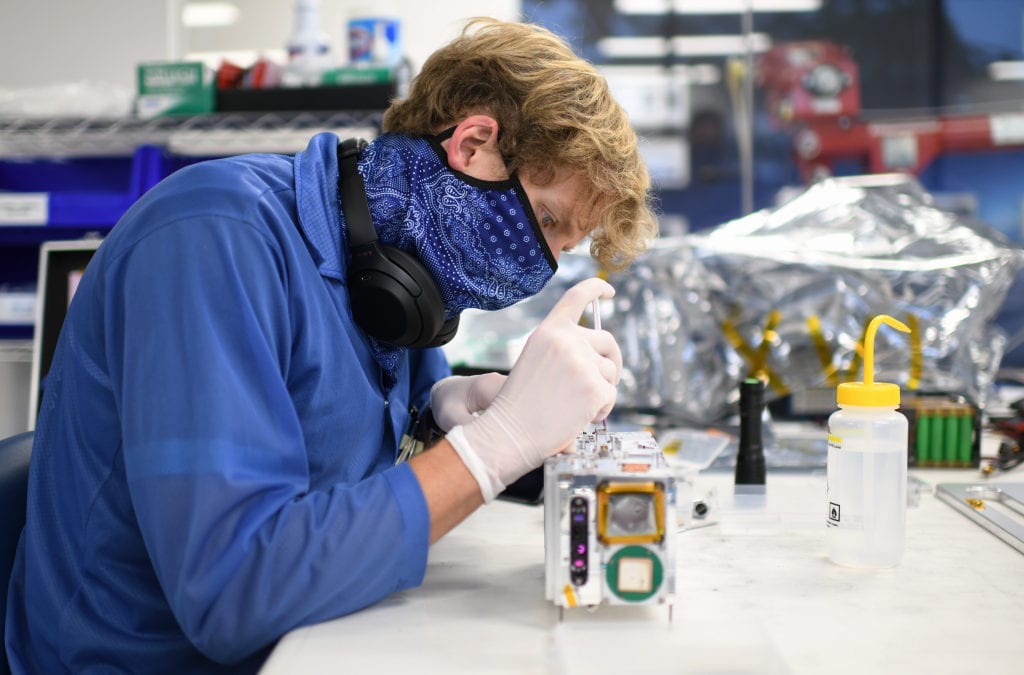 In 2008, George Stafford, Matt Beckner and Stephen Steg, all University of Colorado graduates with experience in the aerospace industry, started their own company to make components for satellites. This year, their company, Blue Canyon Technologies, opened an 80,000-square-foot satellite factory in Lafayette.

“We actually started the project last fall in anticipation of the growth in the company for factory-scale production,” said Beckner, the chief operating officer.

Blue Canyon has another 55,000 square feet of offices, clean rooms and production facilities in Boulder. The company, with 270 employees, has added 58 new positions since March, the start of the COVID-19 outbreak in the U.S.

Blue Canyon isn’t alone in flourishing during a pandemic and a national recession. Several aerospace companies in Colorado are hiring new employees and expanding or building new plants and offices. They include industry heavyweights such as Ball Aerospace, Lockheed Martin, Raytheon Technologies and Sierra Nevada Corp. to smaller companies such as Blue Canyon, Astroscale U.S. and York Space Systems.

“Not only the Colorado space economy but the national space economy is weathering the whole COVID-19 pandemic fairly well,” said Jay Lindell, the aerospace and defense industry champion in the Colorado Office of Economic Development and International Trade.

However, the Colorado aerospace sector stands out in one specific area. “We’re still the No.1 space economy in the nation based on per capita employment,” Lindell said.

A report by the Metro Denver Economic Development Corp. says Colorado’s overall private aerospace employment of 30,020 in 2019 was second only to California’s and was the highest per capita in the nation. Aerospace employment grew 7.2% from 2018 to 2019 and by 19.4% from 2014 to 2019, according to the report.

“To be honest, we’re not seeing a slowdown for 2020 in aerospace and defense. We’re seeing hiring activity, we’re seeing expansion activity,” said Vicky Lea, director of aerospace and aviation at Metro Denver EDC.

The 2019 report on the industry showed there are nearly 280 aerospace businesses in Colorado and more than 500 companies and suppliers providing space-related products and services. The analysis says 57,830 private and military workers in Colorado support an additional 140,390 workers in all industries, bringing direct and indirect jobs supported by the aerospace sector to 198,220.

The total aerospace payroll was nearly $3.9 billion in 2018 and the industry contributes more than $15 billion to Colorado’s economy annually.

Colorado is home to some of the industry’s biggest players, major universities with renowned engineering and aerospace programs, military and defense space programs and is the provisional headquarters of the U.S. Space Command. A decision is expected in January on whether Peterson Air Force Base in Colorado Springs will be the permanent location.

“I’d say that’s the strength of our industry, really, these very innovative small businesses that invent or have new technology that directly applies to multiple industries, but especially to the aerospace industry,” Lindell said.

The AAA of outer space

Astroscale U.S., whose parent company, Astroscale Holdings, is based in Japan, began operations in April 2019. In June, the Denver-based company acquired the intellectual property and other assets of Effective Space Solutions, an Israeli company working to extend the life of satellites in orbit.

“We’re driven by the vision of space sustainability. As humans continue to launch into space and expand into space, it’s very exciting. It adds a lot of economic value back here on Earth, in terms of communications, internet connectivity, remote sensing,” said Ron Lopez, the company’s president and managing director.

At the same time, all the satellites and other crafts providing vital information and services are adding a lot of orbiting debris, setting up potential collisions that could have drastic impacts on those services. There are more than 34,000 pieces of debris bigger than 4 inches in diameter and hundreds of millions that are smaller, according to Astroscale.

“Over the next 10 years, we’re going to see about three times more stuff get launched into space than has ever been launched since humankind started launching stuff back in the era of Sputnik,” Lopez said.

Astroscale is solely dedicated to providing on-orbit services to bring down dead satellites, remove debris and repair and upgrade satellites in geostationary orbit, about 22,000 miles above the equator, rather than send up replacements. The Denver-based company is preparing for an on-orbit demonstration of docking with an object and bringing it down into the atmosphere where it will burn up.

“Maybe the not-so-exciting way to put it is we’re like the AAA of space,” Lopez said.

Shooting for the moon

The space program, based in Louisville, is on one of three sets of teams vying to provide a module to ferry astronauts and cargo to and from the moon’s surface as part of NASA’s Artemis project, which plans to land the first woman on the moon by 2024.

“Even with COVID-19, the aerospace industry is booming. We have lots and lots of things that we’re working on,” said Janet Kavandi, senior vice president for the company’s space business sector.

The biggest program is Dream Chaser, which harks back to the space shuttle’s design. It will land on a runway. Its launch is officially set for late 2021, but that could slip into 2022 in large part because of delays caused by the pandemic, said Kavandi, a former NASA astronaut.

“I think a lot of the aerospace industry has similar challenges with suppliers, getting parts and materials,” Kavandi said.

However, the coronavirus outbreak hasn’t slowed hiring at Sierra Nevada.

“We’ve implemented a really good work-from-home and work-from-work kind of split where we have kept our workforce safe. We’ve had no transmissions of the virus at work,” Kavandi said. “And we are actively hiring. We continue to need new talent, especially in the engineering and technical areas, but really across all aspects.”

Space Systems filled about 200 positions so far this year and has 57 current openings. Sierra Nevada has roughly 2,000 employees in Colorado, including in defense-related work.

Dylan Taylor, a longtime investor in the space business, started a company in 2019 to provide the structure to make it easier for medium-sized businesses to take their work to the next level. Taylor said Voyager Space Holdings is an operating company that provides the business functions and a presence in Washington, D.C., that smaller companies likely couldn’t build on their own.

“The idea is we’re acquiring very highly capable, technically innovative companies that aren’t startups but are relatively small companies,” Taylor said. “They’re generating revenue, generating profit. They’ve been in business for some time and had some success, but they’re looking to be part of a larger ecosystem.”

Taylor, CEO and chairman of Denver-based Voyager, said the founders and managers of the businesses that are acquired retain some equity. Voyager represents the effort to fill a gap that Taylor saw in the aerospace industry between the large companies and the entrepreneurial startups.

Taylor said Pioneer Aeronautics, a research and development company, recently won a contract from NASA to work on extracting oxygen from soil on the moon. Being able to tap resources in space to produce water, oxygen and fuel, what NASA calls in-situ resource utilization, will be essential for longer stays in space.

No better time to be in the industry

The coronavirus scrubbed this year’s Space Symposium, held annually in April by the Space Foundation. The symposium, which draws industry representatives and businesses from around the world, has been rescheduled for August 2021, said Tom Zelibor, the foundation’s CEO.

The Colorado Springs-based foundation will participate in the 20th Annual World Space Week Oct. 4-10 with both virtual and in-person events. Zelibor said the event’s theme, “Space Unites,” closely aligns with the foundation’s belief that “space is for all.”

Despite postponements and challenges caused by the pandemic, Zelibor said the foundation, which produces a quarterly report on the industry, sees “incredible growth” in the space business. In 2019, the industry was valued at nearly $424 billion, up from about $245 billion a decade ago, Zelibor said.

“Personally, I don’t believe there’s a better time to be in the space industry,” said Zelibor, a retired Navy Rear Admiral and a former director of global operations for the U.S. Strategic Command. “I haven’t seen this much excitement in the space industry since back in the Apollo days.”

He attributes a lot of the excitement to the involvement of such commercial enterprises as Elon Musk’s SpaceX and Jeff Bezos’ Blue Origin as well as interest from Google and other corporations.

There’s also a recognition that space is part of the critical infrastructure of our lives, Zelibor said. “It touches every part of our lives every day. It’s a national imperative. There’s no avoiding it. It’s part of military operations, part of our financial operations. It’s just part of everyday life.”

Zelibor said he spreads the message that space isn’t just for rocket scientists and astronauts. As the industry matures and expands, it needs manufacturers, people with entrepreneurial and business skills, legal expertise, communications and problem-solving abilities. He tells the story of an aerospace company that needed someone with fine motor skills to work on circuit boards. The company trained one of Boulder County’s better tattoo artists for the position.

“I don’t think there’s a single set of ingredients for a successful employee in the space industry.”