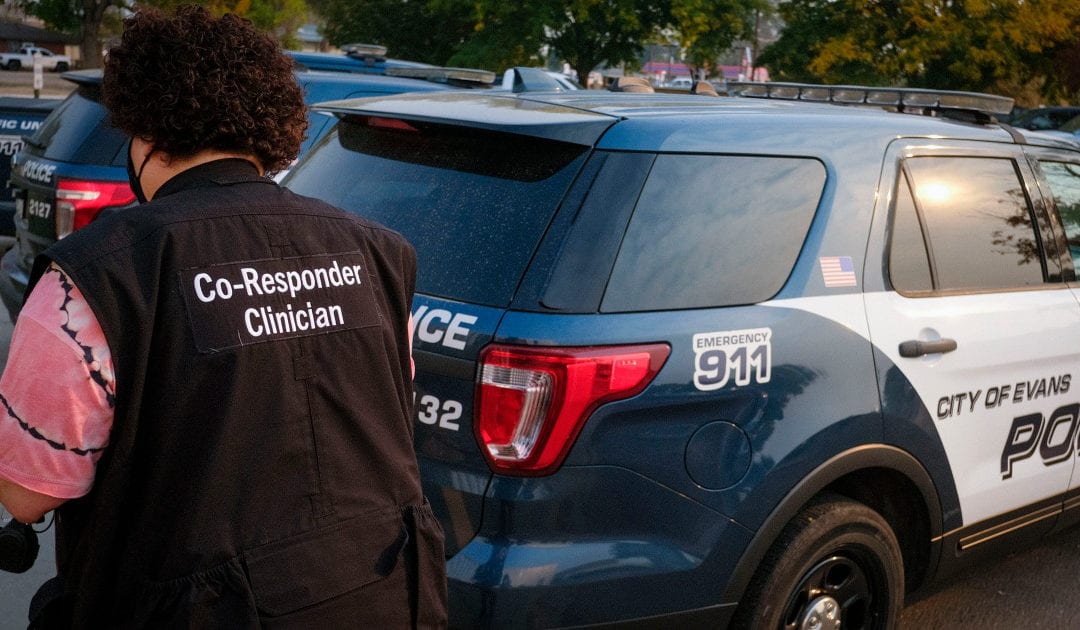 Greeley Police Department Commander Rafael Gutierrez does not long for a simpler past, when dispatchers would get a call for someone threatening suicide and his only realistic option was handcuffs and a short stay on high watch in jail.

Such an episode would typically be followed by a quick release back to the community, and within days or weeks, they’d receive the exact same call about the exact same person.

For most of the past two years, Greeley police and their partners in the nearby Evans Police Department have had a better option: A trained mental health counselor from North Range Behavioral Health can go with them on the call, address suicide risk and other mental health issues with a professional perspective, and get the troubled person to inpatient treatment or counseling appointments without an ineffective arrest.

“Their insight on dealing with suicidal individuals is big,” Gutierrez said of the co-responders. “We can make a unified approach and come up with a better plan to deal with that person on a long-term basis. Before, we took a law enforcement approach to it. They’ve really changed our perspective.”

Public safety and public health leaders around the nation are experimenting with alternatives to traditional law enforcement, in the wake of national protests over police killings of people of color experiencing mental health crises, as well as closer studies of prison populations.

The first comprehensive review of state-sponsored co-responder programs like the one in Greeley and Evans shows they are cutting the number of arrests and increasing connections to other community services in behavioral health cases where officers said their only past option was jail time. The Colorado Health Institute (CHI) and the state Department of Human Services’ Office of Behavioral Health said that while hard numbers are still difficult to come by, surveys of the police departments show a significant improvement in handling residents exhibiting non-criminal but desperate behavior. (CHI is a Colorado Trust grantee.)

Co-responders sponsored by the Office of Behavioral Health in eight different Colorado locations answered 4,357 calls from August 2018 to August 2019, the report said. Mental health co-responders were involved in 165 calls per month in the busiest location (Larimer County), to a low of 19 calls per month (Broomfield).

Frequent users of emergency services made up a high percentage of the calls, as is often the case with people experiencing homelessness, mentioning suicide, coping with substance abuse and similar challenges. In Broomfield, the CHI review found, just under 30% of co-responder contacts were with “high utilizers” of the emergency system, and in Longmont the portion was over 23%.

The longer the co-responder programs ran, the report found, the more successful they were in diverting people away from “formal actions”—defined as arrests, mental health holds or emergency department transports. In the first month of operations, 36% of programs said they could often or always divert people from emergency departments, but a year later more than half were reporting the same success.

“It’s a way to help take the burden off first responders and provide that service to help link and engage individuals with the service they need,” said Emily Richardson, manager of co-responder programs at the Office of Behavioral Health.

Numerous law enforcement personnel told CHI that new training and their experiences with co-responders had boosted their understanding of mental health issues and created more options for carrying out their jobs. During training sessions, first responders and co-responders learn from each other about de-escalating situations, staying safe, what outside resources are available, and more.

“Some of the newer officers are seeing that not every call they go on has a criminal offense,” one police officer told CHI.

“I don’t think we can overlook the piece about attitudes in law enforcement,” Richardson said. “People involved in these encounters have a better sense of fairness and being treated with respect.”

The local programs are made possible by a law passed by the state legislature in 2017, providing $2.9 million in legalized marijuana taxes for 10 co-responder programs. Another $400,000 came from a federal block grant, and legislators added $1.5 million from the General Fund to launch more locations in 2020. In statistics cited often during bill discussions, advocates noted nearly half of Colorado inmates have mental health conditions, and an estimated 74% have substance use disorders.

Various formats of co-responders to ride along with or follow up for first responders have become more common across the U.S., and across the emergency disciplines.

Aurora Mental Health Center worked with police, fire and emergency medical personnel to create the Triage program, culling through hospital emergency room records to find frequent utilizers and reach out to them with resources. Options include appointments for mental health counseling, arrangements for filling prescriptions, assistance in finding housing for people experiencing homelessness, explaining medical benefits to veterans, and more. Emergency calls by the top 10 utilizers dropped from 360 a year before the program started to 146 in the first 12 months of Triage operations.

The Regional Transportation District has also embraced co-responders, contracting with Mental Health Center of Denver for professionals who can respond with RTD and Denver Police on calls about agitated riders on buses, people sleeping in RTD shelters or people confronting drivers.

In mid September, the City of Aurora allocated its own money for a new form of co-responder program, in which mental health clinicians plan to ride along with paramedics and medical responders to 911 calls that are clearly not a medical or police emergency.

CHI noted there are limitations to the study, including hard data of the kind produced by comparing those helped to a control group. Leaders of the programs also said both police and mental health counselors have to continue working on training, and aligning their policies on diversion to alternative services.

In Greeley and Evans, Gutierrez said, officers want an even bigger alliance with local mental health.

“We’re looking at the potential for expanding our hours, so we’re doing a call analysis to see if there’s more need after midnight or 1 a.m., when we get more of the alcohol- or substance-fueled calls,” he said.

Freelance writer Michael Booth wrote this story for The Colorado Trust, a philanthropic foundation that works on health equity issues statewide. It appeared at coloradotrust.org on Oct. 14, 2020.