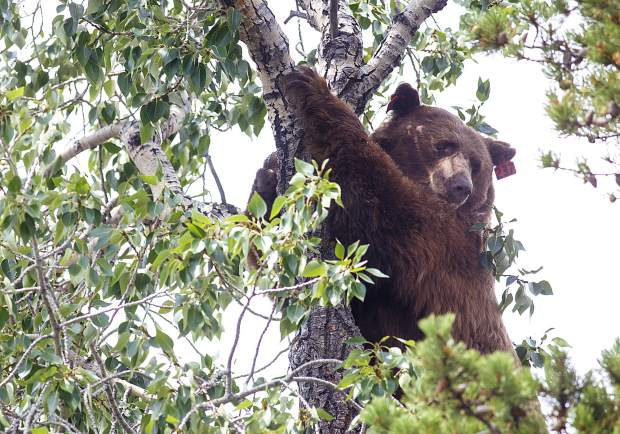 As the people responsible for the wildlife resources in northwest Colorado, we are reaching out to issue a warning: something more must be done about bears. We’ve begged, pleaded, educated, advised and asked nicely in the past. Yet, bear conflicts appear each summer like clockwork. Attractants are widespread, doors and windows are open, and cars are unsecured with food inside. We can’t yell any louder to get people’s attention, but there is something we can continue to do — manage bears.

The old timers around here will tell you that bear incidents were rare in these parts in the past. In the 1980s, only three bear attacks were reported to our agency. There were six incidents that resulted in human injury in the 1990s. As the state population skyrocketed, bear conflict numbers have too. Since 2000, there have been more than 60 human injury incidents in the state, with 33 of them since 2010. In 2019 alone, there were five people injured by black bears in Colorado, three of them in the Aspen area.

As wildlife managers, we have an obligation to respond to incidents where people are injured. We must euthanize bears that injure people. We cannot risk relocating a dangerous bear — can you imagine the outcry if a bear was known to be aggressive and injured someone after being relocated? Plus, there are not many places to relocate bears where they won’t find towns, campgrounds or recreationists. Even Colorado’s famed wilderness areas are crowded with people these days. Relocation may seem like a happy ending but it often results in bear-on-bear mortality or a bear trying to return “home” and being killed crossing a road, river or ranch.

Our responsibility is to manage hunting to set the bear population at a safe and healthy level. That number is set based on available bear habitat. For many years we have explained to local decision-makers that new subdivisions and expanded hiking trails would result in less habitat for bears. Well, that day has come.

We know that some people don’t like that answer. We hear from you when bears are put down. Statements like “bears were here first,” and “it’s the people’s fault,” are all true, but they aren’t solutions.

The Colorado that we have dedicated our careers to conserving has changed. There’s not as much room for the wild critters, especially ones that weigh 400 pounds, break into houses and can cause serious injury with a single paw swipe.

Choices have been made: development and outdoor recreation have made Colorado a fast-growing and popular place to live, unless you’re a bear. It is not our role to question the choices, rather we must respond and manage the consequences before the situation worsens.

We hope people understand our dilemma and our jobs. We’re passionate about Colorado’s wildlife resource. We all got into these careers because wildlife is amazing and deserves a voice. We’re the voice. But it has gone unheard. Cities grew. Recreation exploded. Convenience reigned.

And now, there is less habitat for bears. The habitat that remains is not sufficient for all the bears that are here. Our job now is to manage the population to a level that the natural habitat will support. To get there means bringing overall bear populations down so that bears can survive without relying on trash, bird feeders, barbecue grills, pet food and all the other human-provided sources of calories.

We will continue to beg, plead, educate, advise and ask nicely for your help. If everyone works hard and manages the human environment, we can help manage bears in their environment but as long as the two environments continue to overlap, bears will be the ultimate losers.

For tips on what you can do around your neighborhood, please search “living with bears” at CPW.state.co.us.