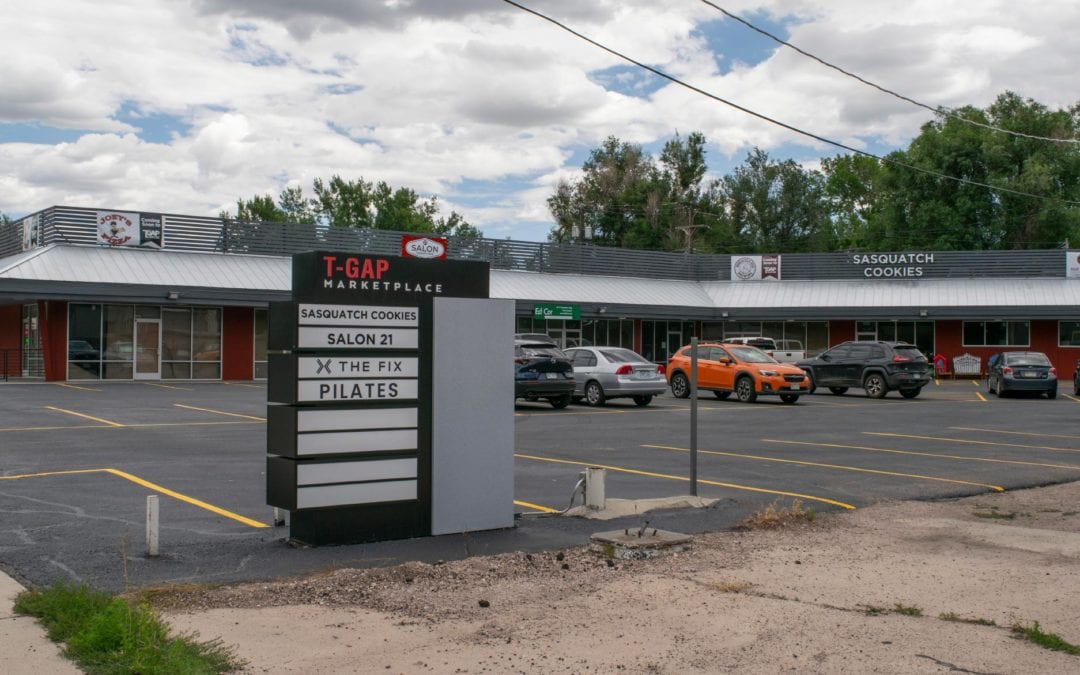 Neglected community shopping centers in some of Colorado Springs’ oldest neighborhoods are beginning to make a comeback.

New businesses are moving into old retail centers in the Patty Jewett and Old North End neighborhoods, with several more coming online in the next few months.

The property was purchased by Ascent TGap LLC for $1.3 million in June 2018, and the investment group completed an extensive exterior remodel costing in the range of several hundred thousand dollars.

Robert Aertker, a partner with Ascent TGap LLC, said when he first stumbled upon the property he immediately recognized its potential for retail businesses that would be attractive to residents of the Patty Jewett area — especially for food and drink.

“When I drove up in the parking lot my thoughts were: a brewery, a pizza joint and put a contract on it today,” Aertker said.

“It was easy to see that it wouldn’t take a whole lot to make this thing into a beautiful little center.”

The property, which will be managed by Griffis/Blessing Inc., consists of the 14,730 square-foot shopping center built in 1957 on just over 1 acre of land with 65 parking spaces.

One of its most attractive features is its location. In the heart of a residential area, it’s just a short drive from downtown but has the benefit of on-site parking that many downtown businesses lack.

“We bought it with the idea that it would be basically what it is becoming — a services-type facility for an incredible neighborhood around Patty Jewett,” Aertker said. “Houses are turning over from the older generation to the newer generation, people are renovating houses and there’s very little retail in that area.

“So what we envisioned was to have some businesses that people could come to from that neighborhood, that would be local to them. So they could ride their bike, walk, or drive a few blocks and be there.”

Two of the center’s tenants from before the purchase — Salon 21 and the medical education and training certification service EdCor — have remained, but EdCor is not renewing its lease and will leave at the end of the year, freeing up another 735 square feet of leasable space.

The first new tenant following the center’s rehabilitation was Sasquatch Cookies — a gourmet cookie business that was delivery-only before opening its first brick-and-mortar location in TGap Marketplace in February.

Amanda Luciano, a real estate agent with Trent Properties, which is handling the commercial leasing, said Sasquatch Cookies opened to “a line around the building” and has seen steady activity despite opening right at the start of the pandemic.

Luciano said she became involved with the project while representing Whistle Pig Brewing Company, which was searching for a new space to open a second location and grow its brewing operation.

“And this center just really spoke to them,” Luciano said. “It’s a neighborhood center and it just felt like exactly where they should be.”

Another pizza restaurant was initially interested in leasing one of the center’s spaces, which Luciano said further attracted Whistle Pig, since the brewery wanted to provide options for food without having to run a full kitchen.

When that pizza restaurant backed out, Luciano said they specifically marketed the space to attract a pizza place and succeeded, securing a lease with Joey’s Pizza.

Whistle Pig has been working on securing permits and was required to apply for a variance because it would be located within 200 feet of residential units. The variance has since been approved.

Joey’s Pizza, Luciano said, also has  been working through the permitting process and construction on its space has begun.

Hot Asana Yoga Studio is another new tenant for TGap Marketplace, moving in after the five-year lease on its downtown studio expired in July.

Luciano said barring unforeseen circumstances, all three businesses are expected to open this fall, as is a new clothing boutique called Urbane Collection.

About 3,000 square feet of leasable space remains in the center, Luciano said, not including the space becoming available in January following EdCor’s planned departure.

Luciano said the remaining spaces have garnered significant interest from businesses, but Ascent TGap LLC’s top priority has been finding tenants that will complement those already in place, rather than leasing to the first businesses to apply.

“There has been interest from bigger users who would have taken more space, but wouldn’t have engaged the center and the community the way these owners really see this center doing — as a hub for what is a very vibrant and hip neighborhood,” Luciano said.

“We’re looking for services that don’t compete with what we already have,” Aertker said.

“So I think a mortgage office right in the middle of that great neighborhood would be a great addition, or maybe a physical therapist or a real estate office would round it out.”

Aertker said he expects the remaining units will be leased in the next few months.

About a three-minute drive or 15-minute walk west of TGap Marketplace, a similar but significantly smaller project is in its final stages.

At 2217 N. Weber St. in the Old North End is a commercial building just under 3,600 square feet, built in 1955, that has undergone a similar renovation to attract new retail businesses.

Matt Call, a real estate agent with NavPoint Real Estate Group, purchased the property in 2018 and performed a six-figure interior and exterior remodel that included a new façade, paint, lighting and entry doors.

Before the renovation, there were two tenants in the building —  Salon Très Belle and Cardinal Health — but the latter has since moved out. The salon remains and recently renewed its lease.

There are also two new tenants in the building that — unintentionally, Call said — are in the same industry as Salon Très Belle, but are not direct competitors.

Chloe + Maddison Skin Studio, a permanent makeup clinic that provides various skin services, moved in at the beginning of 2020. Artiva Natural Nail Studio — its name denoting that the studio does not offer any artificial nail enhancements — is set to occupy its new space in September once interior tenant improvements are complete.

As with TGap Marketplace, Call said the primary draw for retail business to the small retail center is its location in the historic Colorado Springs neighborhood and proximity to the city’s booming downtown.

“And it’s also a little bit about affordability,” Call said. “You get the benefits of being right near downtown without having to pay the top-shelf rental rates.”