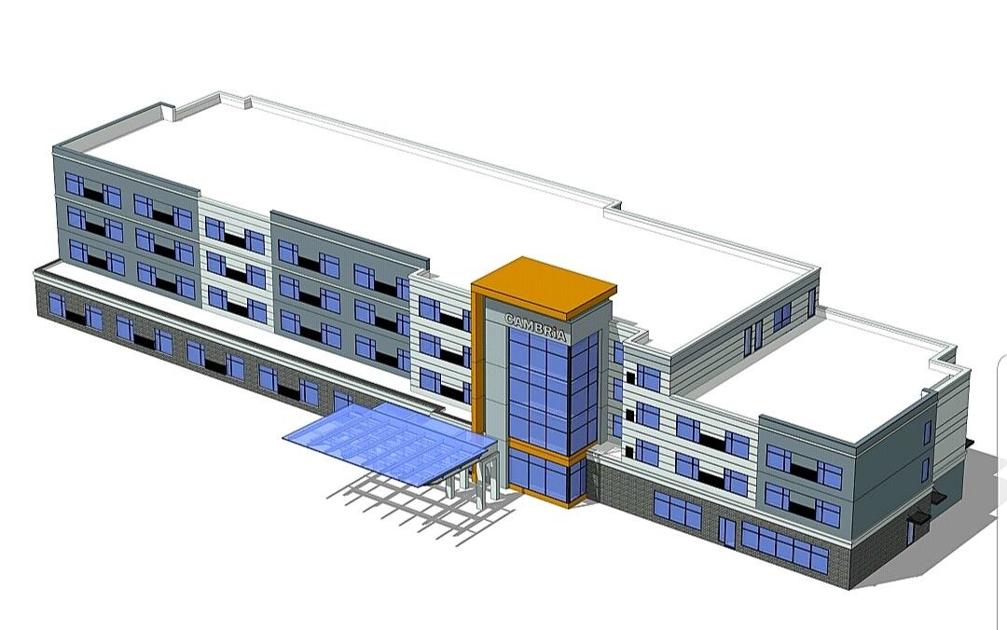 A second hotel coming to Victory Ridge in northern Colorado Springs would be the first of its kind in the city.

Shahford Hospitality, a partnership composed of developers in Denver and Omaha, Neb., plans to build a four-story 103-room Cambria Hotel & Suites in Victory Ridge, the 153-acre mixed-use project southeast of InterQuest and Voyager parkways, according to a proposal submitted to city government officials.

Cambria is part of Choice Hotels, whose familiar brands include Comfort Inn, Sleep Inn, Quality Inn, Clarion and MainStay Suites. There are only about 60 Cambrias nationwide, including one near Denver International Airport and another in Fort Collins.

Cambria, as described by Choice Hotels, offers “modern and stylish” rooms and amenities. The hotels avoid a cookie-cutter look and feel, and each is designed with accents, artwork and features that reflect a particular city or market, according to Choice. The hotels also specialize in offering local craft beers at their bars and restaurants.

In Colorado Springs, the Cambria Hotel will cater to leisure and business travelers, said Ryan Belford of Omaha, who along with partner Ketan Shah of Denver, make up Shahford Hospitality. Belford and Shah are part of hotel industry families and have extensive backgrounds in development and management across several hotel brands.

The Cambria Hotel will have a first-floor restaurant, outdoor pool, gym and meeting space that will accommodate conferences, banquets and other events, Belford said.

The hotel’s prized amenity will be a rooftop bar and deck, similar to those found at other Cambria properties. In Colorado Springs, it’s expected to be particularly attractive to guests and members of the public because of the city’s majestic mountain views, Shah said.

“Unlimited views,” Shah said. “I think we’ll do really well up there. It will be an awesome place for events, weddings, for people to buy it out.”

Belford and Shah said they liked Colorado Springs because of its booming population, healthy economy, hot housing market and numerous employers expanding and locating in the area, such as In-N-Out Burger and Southwest Airlines.

Despite the pandemic, its hotel industry was one of the nation’s strongest last summer, though it struggled later in the year and during the winter.

“Looking back at last summer, through this horrible pandemic, Colorado Springs was the No. 1 hotel market throughout the summer,” Shah said. “That tells you something right there. Even through the worst thing that this country’s going through, Colorado Springs was booming the entire summer. It’s the No. 1 housing market. People are moving there. I don’t see it slowing down anytime soon.”

The developers say they expect hotels to continue to recover in 2021. The following year, the nation will see “record high numbers of travelers supporting airlines, local hotels and restaurants,” Belford and Shah predicted in a proposal submitted to the city.

Victory Ridge, where the hotel will be built, is one of several retail and commercial developments in the InterQuest area on the far north side. Hotels, restaurants, apartments, townhomes, entertainment venues and service-oriented businesses have been developed in InterQuest over the last several years.

Ent Credit Union is completing a new headquarters in the area; Centura Health will build a third hospital nearby; the Great Wolf Lodge offers an indoor waterpark for guests; Scheels All Sports opened an outdoor and sporting goods store; and Whataburger, the Texas-based hamburger chain, plans to open its first Springs restaurant in InterQuest.

At Victory Ridge, California-based In-N-Out opened its first restaurant in Colorado last year as part of its expansion to the state. In-N-Out also built a distribution and production facility at Victory Ridge, where the fast-food chain envisions an office building as part of a plan to make the Springs a regional hub. “I lived in California for a long time, I love In-N-Out,” Belford said. “Once I heard it was going to be across the street, I’m like, that’s a done deal for me.”

As planned, construction on the Cambria Hotel would begin this year and it would open in 2022. Shah’s and Belford’s group paid $709,500 in October for a little more than one-half acre at 1875 Democracy Point in Victory Ridge, El Paso County land records show.

There’s also room for a potential third hotel at Victory Ridge, he said.

“The quality of the (hotel) brands that are coming to the project is a testament to the other uses that are out there,” Moore said of Victory Ridge. “We have some other draws at the property that are certainly complimentary to these hotels.”