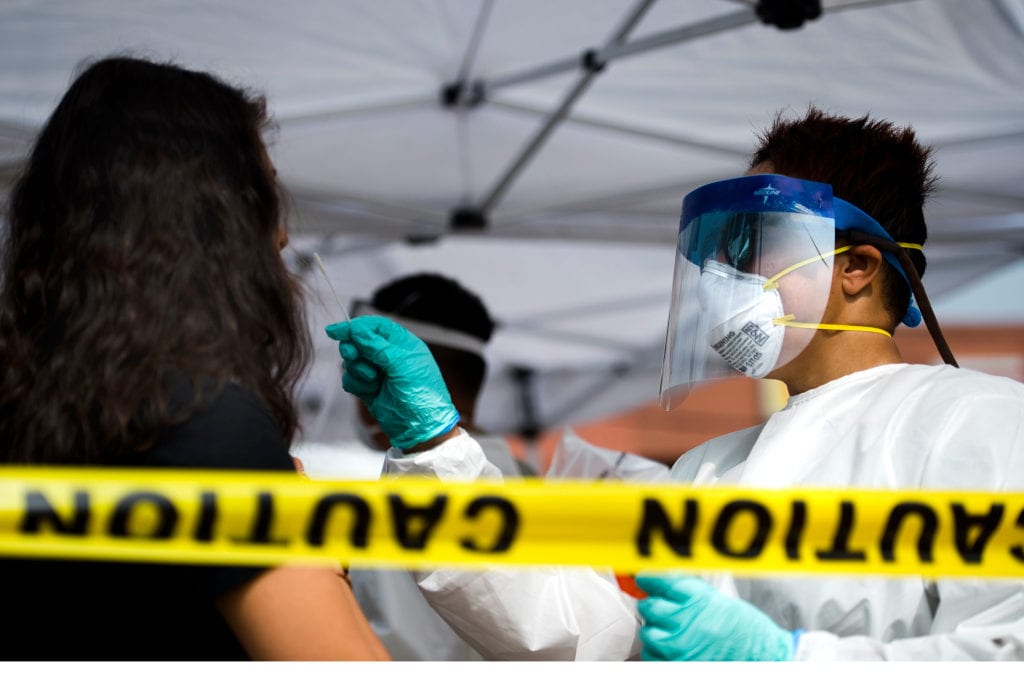 New cases of COVID-19 in Colorado hit a record high last week as hospitalizations for the novel coronavirus also continued to climb.

The Colorado Department of Public Health and Environment reported 6,722 cases of COVID-19 in the week ending Sunday, more than triple the most recent low of 2,016 in the last week of August. Three times last week, the state recorded more than 1,000 new infections in a single day.

Last week’s total was the highest since the state has had reliable data, though it’s likely there were more cases in the virus’s initial surge in March and April that weren’t found due to lack of testing at the time.

“These numbers are definitely a concern for us. We need everyone to follow public health guidance to control disease transmission and ensure that health care and public health capacity isn’t strained,” Dr. Rachel Herlihy, the state epidemiologist, said in a statement. “We also want Coloradans who may have been exposed to COVID-19 to get tested.”

As of Monday afternoon, 381 people were hospitalized in Colorado with confirmed cases of COVID-19, which was the highest level since May 25, but still well below the peak in April. That means nearly three times as many people are hospitalized as were in early September, when daily totals hovered around 130.

Deaths due to the virus increased through September, but it’s not clear if that continued into October, because reports of fatalities can come in up to two weeks later.

We ask all Coloradans to stay vigilant and follow the COVID-19 protocols as the cases and hospitalizations are on the rise. The seven-day positive average is 5.45%. A higher rate of positive cases indicates an increase in disease transmission and more cases going undetected. pic.twitter.com/Bgkssg9RM5

It’s not certain what’s driving the increased spread, said Dr. Jon Samet, dean of the Colorado School of Public Health. A temporary Labor Day bump would be behind us at this point, he said, but it’s possible school and college reopenings, cooler weather and “COVID fatigue” could be playing a role.

Much of the central United States is seeing cases rise again, as are multiple countries in Europe.

For now, hospital capacity isn’t threatened, but some models show a problem on the horizon if current trends continue, Samet said. Everyone needs to remember that the virus is still circulating, and leaders need to determine what they can do to contain the virus without returning to stay-at-home orders, he said.

“We’re a month from the holidays, so this is a critical window,” he said. “No one wants to go back to March. I think we need to take every measure we can now.”

An average of 77% of Colorado’s available intensive-care beds and 79% of hospital beds for less-severely ill patients were in use over the last week. The total includes beds occupied by all types of patients, because a full bed can’t be used for someone else, regardless of whether the patient has COVID-19 or a different illness.

The percentage of COVID-19 tests coming back positive remained above the state’s goal, at an average of 5.5% over the last three days. When the positivity rate is above 5%, it can be a sign a state isn’t doing enough testing and may miss cases.

Denver and Adams counties accounted for the most new cases, with slightly more than 1,100 each. Neither appears to be slowing down, as the number of new cases increased faster than in recent weeks. The same pattern appeared in Arapahoe, Douglas, El Paso and Jefferson counties.

Four counties had enough new cases to be in the red on the state’s dashboard: Adams, Logan, Sedgwick and Yuma. Theoretically, counties that can’t reduce their cases enough to get out of the red could be pushed to adopt stay-at-home orders, but the state health department has shown little appetite for that level of restriction.

Another 14 counties, including Denver, Arapahoe and Jefferson, had enough cases to be in orange, where guidelines call for stricter limits on capacity at most businesses.

Denver and Arapahoe counties ordered increased limits on gatherings Friday, but it won’t be clear if those brought down new infections until the end of the month, because it takes one to two weeks for new infections to appear in the case counts.

So far, 86,374 people in Colorado have tested positive for the virus, and 8,248 have been hospitalized. Since March, 2,051 people died of the virus in Colorado.