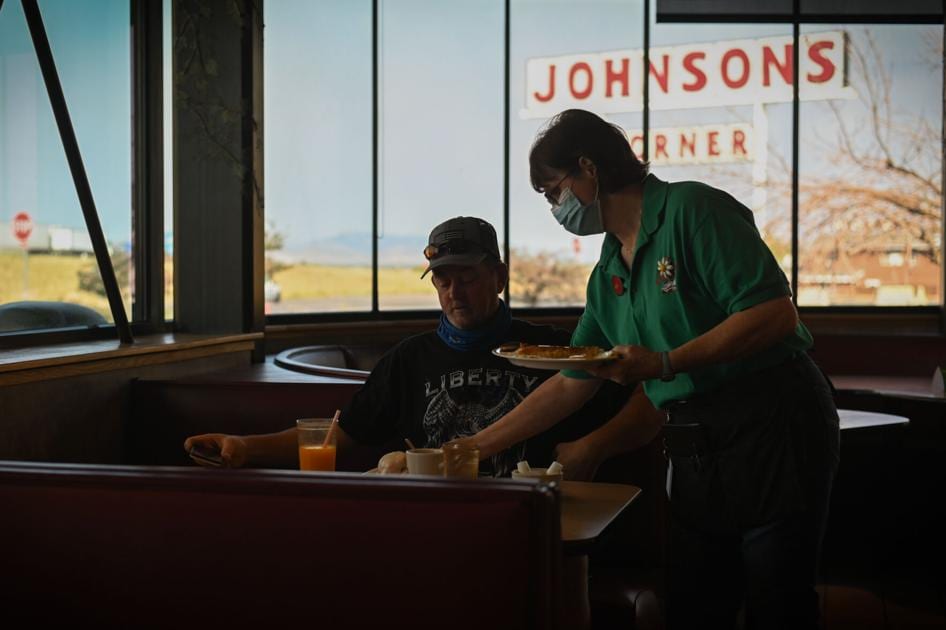 JOHNSTOWN • The man takes his booth, and before he can gather six decades of memories here, his usual is served: a homemade biscuit with gravy accompanied by hash browns, bacon and eggs, over-easy as always.

“I remember when gas pumps were in the front,” del Campo says. After renovations, this is now where the cashier is, where the now-famous cinnamon rolls are sold in to-go boxes. The gas pumps are outside, owned by a corporation — as is Johnson’s Corner, whose family owners sold seven years ago.

Del Campo knows as good as anyone around here that things change. He was born in 1935 and raised in nearby Milliken, the outpost that doesn’t feel so rural to locals anymore.

“I remember there was one cop on duty, no stoplights, dirt roads,” says waitress Sarah Kroh, thinking back to her childhood. “I think a lot of folks are frustrated, like the farmers. Just that traditions are going away.”

But Johnson’s Corner is still here. Those big, blocky letters hanging over I-25 are still here, impossible to miss, as recognizable as the cinnamon roll boxes found at 7-Elevens across the Front Range.

Locals know where the real taste is.

It’s right here, where del Campo doesn’t see many friends anymore. They’ve come and gone. His wife died 23 years back. Following that tragedy, this is where he came most every morning and evening — for breakfast and dinner, yes, but more so for smiling faces. “The girls here always remember me,” del Campo says.

They include Maria Mendoza, who’s been around since the 1990s. The 2014 sale to TravelCenters of America, the nation’s biggest operator of truck stops, worried her like everyone else.

But TravelCenters of America knew better than to change much. In interviews after the acquisition, the company’s president and CEO vowed to “keep the charm and character” here.

So it’s been, says Tambra Schulte, the manager who grew up in the area.

Johnson’s Corner “has that hometown feel,” she says. “That small, hometown feel where everybody knows each other. … It represents some old-school (values) that are lost in today’s world.”

It’s best experienced when families, farmers and truckers gather on Sunday mornings, Travel and Leisure Magazine once advised. “But then again, the Corner is open 24 hours,” read the article in 1998 that listed the eatery among the world’s 10 best breakfast spots.

That round-the-clock dependability is as central to the reputation as the cinnamon roll — that warm glow in the dreariness of a long night or cold blizzard. Johnson’s Corner has embraced the weary since 1952, when it opened under the entrepreneurial Joe Johnson.

“Where most thought Joe crazy for building his new facility out in the middle of nothing but farms,” reads a historical pamphlet, “little did anyone know that a few years later construction would begin on an interstate highway that would run right in front of his cafe.”

Del Campo remembers those days before the pavement. The morning traffic runs like time, unrelenting.

But here in Johnson’s Corner, he can pause and remember.

“Everybody always asks me, ‘How do you stay so healthy?'” he says. “I tell them it’s about good memories. I stay in good health because I have good memories. And Johnson’s Corner is a good memory.”

Cinnamon rolls available to go along with big doughnuts, fruit danishes and turnovers. Fresh goods from the bakery are displayed up front, as are daily specials. For breakfast on this visit, they included steak and eggs ($14) and chicken fried chicken with eggs ($11). The cinnamon roll French toast ($9) is a local favorite.

Like the cinnamon roll ($4), the biscuits are baked in-house and popularly go with the house gravy ($8, eggs and hash browns included). Specialty green chili smothers the breakfast burrito, served with potatoes ($10). Omelets and pancakes fill out the breakfast menu.

The lunch and dinner slate features classic sandwiches such as a club, french dip and BLT ($9-$10 with a side). A 1/3-pound burger melts with Swiss cheese and grilled onions between rye bread ($10 with a side). Standard burgers and taco salad ($10) also available.