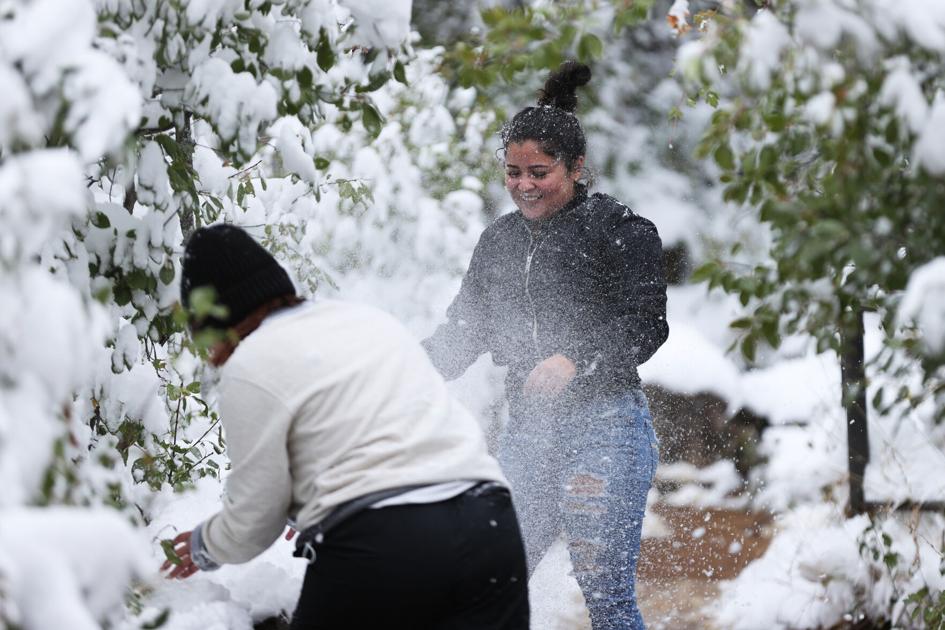 An early season storm will dump more than a foot of snow along parts of the Front Range, potentially taming northern Colorado’s out-of-control wildfires while zapping the Pikes Peak region and Denver with two days of subfreezing chill.

Snow was picking up from Monarch Pass to the Palmer Divide by Sunday afternoon, delivering 1.3 inches in Monument, 2.5 inches in Black Forest and an inch in Fountain, with more on the horizon, the National Weather Service in Pueblo said. At the same time, lightning was spotted over Tincup Pass west of Buena Vista, and roads were growing perilous throughout the Rocky Mountain region.

“Black ice is beginning in southern Colorado,” the Colorado State Patrol warned in a tweet. “Are you prepared? Slow down, give room, wear your seatbelt and pull over in a safe location to clean your windshields.”

Around Pikes Peak, snowfall was expected to be heaviest at higher elevations, with Woodland Park set to receive 1-3 inches Sunday and up to 9 inches overnight, according to a weather service forecast.

With Colorado Springs expected to receive 1-3 inches of snow during the day and up to 5 inches overnight, snow plows were deployed across the city Sunday afternoon, and city officials issued a statement predicting a “rapid deterioration” in driving conditions.

Slick roads and blowing snow were likely in the Springs for the next 48 hours, as highs in the 20s drop to 5 degrees overnight Sunday. On Monday, the forecast called for a high of 15 and a low around 3, with similar highs and lows in the high country.

The bitter cold relents Tuesday, rebounding into the 40s under clear, sunny skies in both Colorado Springs and Teller County.

Denver and its suburbs should likewise expect a frigid start to the week, with 2-4 inches of snow on Sunday and up to 7 inches overnight. The low will dip to 7 degrees, but with winds gusting at 16 mph, it will feel as low as -2.

Snow is possible in Denver until noon Monday, when it will give way to clear skies and a high of 18 degrees. Warmer temperatures arrive Tuesday, rising to a high of 42 degrees with no more snow in the forecast.

Aside from traffic woes the storm brings cause for hope in northern Colorado, where wildfires have leveled an unknown number homes while causing thousands to flee for safety.

Snow is likely to blanket some areas where fire crews have been eager for a break in the hot, dry weather that whipped up conflagrations.

A winter storm warning in effect until early Monday reports up to a foot of snow is expected near the Continental Divide and Jones Pass where the East Troublesome fire is burning. Fire officials say minimal growth is expected of the fire after midnight.

Estes Park was expected to receive up to 13 inches between Sunday and Monday, and up to a foot of snow is expected in Boulder during the same period, while Fort Collins could get up to 10 inches.

Western Colorado is under a winter storm warning from noon Sunday to 6 p.m. Monday.

In the Leadville area and in Lake, Chaffee and Fremont counties, heavy snow is expected with totals ranging from 11 to 17 inches, according to the weather service.

East of the Continental Divide, expected snow totals range from 8 to 18 inches with winds up to 40 mph.

Parts of Colorado’s ski country will get dumped on, contributing to snow totals weeks before ski lifts begin running. Up to 12 inches are expected in Vail, 9 inches in Steamboat Springs, 7 inches in Aspen and up to 14 inches in Silverton, the forecast shows.

“One month until opening day, snow in the forecast and we’re all jazzed up!” Vail said Oct. 20 on Facebook ahead of a Nov. 20 opening day.

But the two-day storm will hit hardest along the southern tip of the Front Range. Up to 15 inches of snow is expected in Salida, 11 inches in Cañon City, 18 inches in Walsenburg and a whopping 21 inches in Westcliffe.

In the San Luis Valley, 7 to 12 inches of snow is expected with winds up to 35 mph. Six to 14 inches of snow is forecast in Pueblo County and in Saguache County west of the Continental Divide, the weather service said.

Travel along the Interstate 25 corridor is expected to be very difficult through Monday, the winter warning said.