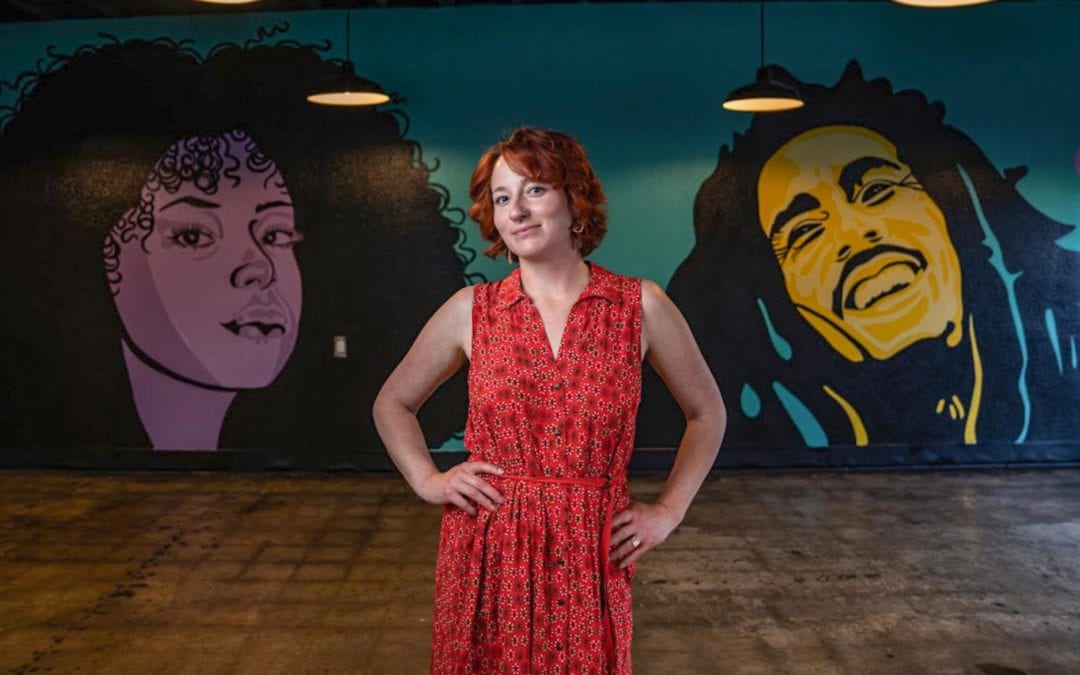 Molly McClure took up the family trade. She’s a painter, just like her dad, Riley, and she’s always had a love of portraiture.

Locals may have seen some of the portraits she’s shown in various exhibitions since she became a full-time artist in 2016. But more recently, she’s shifted to larger pieces on a more accessible canvas.

In 2018, a group of local artists began a collaboration to beautify a gritty commercial stretch of Platte Avenue between Union Boulevard and Circle Drive. The project was dubbed the Knobhill Urban Arts District, and McClure is one of many who’ve put up murals on buildings in the area. She collaborated with multidisciplinary artist Paes164 on a mural portrait of Jimi Hendrix on the side of The Bomb Head Shop, near the Knob Hill neighborhood’s eastern edge.

Born in Lafayette, Indiana, McClure and her family moved to the Springs when she was very young and she considers it home.

What do you think has made you stand out in the community?

Being part of the Knobhill Urban Arts District is huge. … I started painting many, many, many years ago but I started taking it very seriously four years ago. … Paes164 was the first person to give me a wall to start muraling. And ever since then it’s just been kind of one after the other. It’s been pretty amazing.

But I started professionally doing them and my first paid gig was for Ion Solar, and that was just a couple of years ago. … I did a landscape mural, like a goofy, super colorful landscape of Pikes Peak. And it was all Doctor Seuss-y. … I was lucky enough to get a job at [Security Service Field] and I got to do one in their banquet area, and it was also another colorful Pikes Peak landscape.

Are landscapes what you primarily paint?

I’m actually trying to paint more than one thing right now. I’m typically a portrait artist — that’s kind of what I’m a little bit well known for. And I just did a mural at Rasta Pasta, who I consider my family. I love them so much. I did Bob Marley and the owner’s friend’s daughter, she died when she was like 17. So it’s also a tribute to her as well.

Where are you from originally, and how did you get here?

I actually grew up in Colorado Springs. I moved away when I was about 19. And then I moved to Denver and I was in Denver for quite a while and I studied at Rocky Mountain College of Art and Design. … It’s a great school. I did not finish there. I actually ended up in a job with an architectural company called Imperial Woodworking Enterprises — and doing that, I found myself in Utah working on a Mormon temple out there. And then I got transferred through our office back to Colorado Springs. Then shortly after that, I decided I wanted to be a full-time artist. [That was] 4½ years ago.

What got you into art in the first place?

I’ve been creating art ever since I was a little kid. My dad [Riley McClure] is a painter. My grandmother is a painter. It’s always been in my life, and I’ve always planned to be an artist. I’ve always loved portraits. Portraits have been my own little obsession since forever.

Is that what you specialized in at RMCAD?

I was actually studying a little bit of everything at RMCAD. I was doing woodworking, sculpture; I was doing all different types of painting. But my focus always kind of came back to portrait work.

How did you make the call to go from woodworking to doing art full time?

I just really wanted to follow my dreams, honestly. That’s just what I wanted to do.

Where did you first show your art?

I think I originally started at Art 111, then I had a piece here and there. My first solo show was Portraits on the Plaza [at Plaza of the Rockies]. … I was working at Tapateria, the Spanish restaurant in Old Colorado City. The chef there, her husband was working at the Plaza, and she loves my art. So she started talking to people about it and got me right in there.

Do think that’s how a lot of artists get their feet under them in this city?

Yeah, I think at first you have to go out — and I did go out and talk a lot at galleries, try to get to know people and then after that, it sort of fell into place. but yeah, I do think [making connections is crucial].

What challenges has muraling had for you?

It gets so hot sometimes. You have to manage your time in the heat. I know it’s probably an unexpected one, but sun exposure is the big [challenge]. … Sometimes scale is an issue, like trying to figure out how to put a piece onto a wall. But other than that, I get a lot out of doing it. It’s a blast … and I love that the public gets to interact with it.

Something about street art or muraling is so fun because it’s not witnessed by one group of people who are seeking something out. It can be witnessed by anybody. And I love that.

Are there skills you’ve had to develop that people would be surprised at?

The transition from oil painting to muraling was challenging due to [having to learn how to] blend these fast-drying paints. … It would take me two months to create a piece in my fine art portraiture, sometimes longer — and a mural, I do in one to two days. It can be a little bit longer, depending on what I’m painting. [One took] nine days.

But that’s been super interesting, working with a medium that dries so quickly, and using brushes that are 100 times larger — that’s been really, really interesting. And I don’t use spray paint at all in my work. It’s hand-brushed.

What are your goals?

I just want to remain a full-time artist. I like muraling as much as possible, and balancing that with … my portrait commissions, so life is going to be busy. I do survive off of my art.

My long-term goal is to balance everything.