Masks are having a moment in Colorado due to coronavirus pandemic 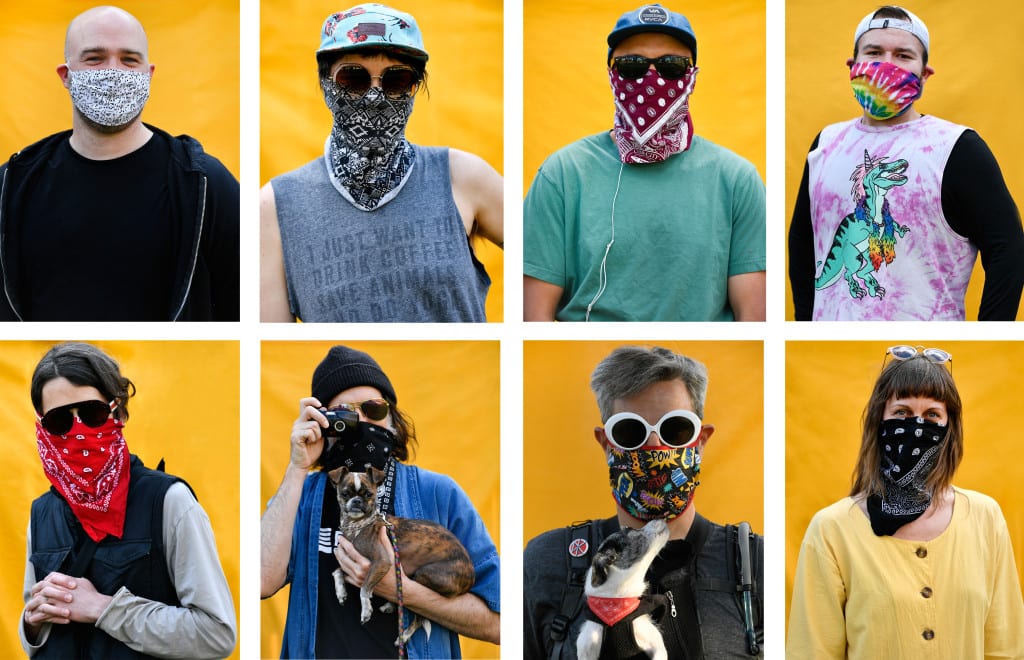 People looked askance at Silas Courson when he started wearing a mask a few weeks ago to ward off the contagious coronavirus that had begun circulating throughout Colorado.

“I think people were looking at me like I was silly — like I was overreacting,” said the cannabis industry recruiter, who lives in Denver’s Capitol Hill neighborhood. “But that stopped last week.”

That was when known cases of coronavirus in Colorado eclipsed 3,000 and deaths from COVID-19, the respiratory disease it causes, approached 100. It was also the same week that Gov. Jared Polis urged all Coloradans to start wearing masks to reduce transmission of the virus, which can spread via respiratory droplets released through sneezing, coughing or breathing.

As of Saturday, there were nearly 6,900 cases of coronavirus in the state, with 274 reported deaths.

“Now people are stopping me and asking me where I got it,” Courson said of his growing mask collection, one of which sports a colorful array of exploding comic book superlatives such as SNAP, POW and ZOOM. “I’m already thinking fashion-forward so that it matches my clothes, matches my shoes. I’m of the mind-set ‘Let’s make it look cool.’ ”

Henry Jones, 6, pictured in Denver on April 8, 2020, said he was wearing his mask “because I get to look like an outlaw.”

Experts say the embrace of face masks by Courson and others could help rein in a contagion that has infected at least half a million Americans and killed more than 20,000 since the first COVID-19 death in the country was reported Feb. 28.

“Up until now masks have only been used in the U.S. for people who are sick … so, for that reason, masks have been stigmatizing rather than health-promoting,” said Shan Soe-Lin, a lecturer in global health at the Jackson Institute for Global Affairs at Yale University. “I hope this mind-set can be changed — and yes, unfortunately, I think it would take a cataclysmic event like this pandemic to rapidly change long-standing cultural norms.”

The more that masks are used in Colorado and across the United States, the more accepted they will become as both a protective barrier against the coronavirus and a visual cue that everyone needs to do their part in stemming the pandemic, said John Zhai, a professor of building systems engineering at the University of Colorado at Boulder.

Zhai wrote a paper on mask usage during the coronavirus pandemic that appeared recently on the National Institutes of Health website.

“Encouraging the wide use of facial masks in critical spaces regardless of people’s health conditions can provide significant social and psychological benefits,” he wrote. “This will increase the public awareness of the severeness of COVID-19 and constantly remind people of the necessity of social distance. It will fully eliminate the biases towards those who are in infection and who are at risk; and will surely mitigate the growing hatred and violence towards those who are from the infection zones.”

Dr. Nathan Pollack shows off his mask on April 8, 2020. “This virus has shown the need for spiritual growth and I think we are seeing that now,” Dr. Pollack said.

Zhai said it’s understandable that the use of masks hasn’t been as prevalent in the United States as it has in other parts of the world, especially in Asian nations where experiences with past viral epidemics such as SARS in 2003 and swine flu in 2009 have helped cement the practice.

Preventing the spread of viruses isn’t the only reason covering the face is a regular practice in Pacific Rim countries, Zhai said.

“The population density in Asian countries is much more than here,” he told The Denver Post. “Because of the pollution issue, they’ve gotten used to wearing masks.”

But in a state such as Colorado, where people embrace an outdoor lifestyle, masks can interfere with activities such as running, cycling and hiking. Brian Hood, who rode his bike from his home in the City Park West neighborhood on a recent afternoon without a mask, said he would simply keep distance between himself and others while out for a ride.

“I’m not being wise or obedient,” he said somewhat sheepishly.

Jose Zamora Ayon and his husband Brandon Joseph pose with their dog Tobi Wan Kenobi in Denver on April 8, 2020. The men said they wanted to be mindful and demonstrate awareness to show everyone that “we are a part of this together and as well that we can get through this together if we all do our part.”

A mile or so southwest of Hood’s home, Hannah Levy spent part of the day on her front porch near Cheesman Park watching people stroll up and down East 11th Avenue, which has been closed to most cars. She said using a mask when she is active fogs up her glasses.

“I’m just trying to be as mindful as I can of getting away from people,” she said.

But Tom and Melissa Gardner were taking no such chances last week. The Denver couple, out for a walk in the Capitol Hill neighborhood, heard the governor’s suggestion on mask use and decided to dig some out.

“From the reports of other countries, it sounds like a great idea,” Tom Gardner said.

Health experts have argued over the efficacy of face masks as a barrier against the microscopic coronavirus. While no one is arguing that a handmade face covering will ever work as effectively as a medical-grade mask, an increasing number of infectious disease experts and politicians are arguing that some sort of barrier is better than nothing.

This month, the national Centers for Disease Control and Prevention issued new guidance encouraging people, especially in areas hit hard by the spread of the coronavirus, to use rudimentary coverings such as T-shirts, bandanas and non-medical masks to cover their faces while outdoors.

That’s a far cry from the message six weeks ago, when U.S. Surgeon General Jerome Adams advised Americans on Twitter to “STOP BUYING MASKS!” Much of the concern at the time was driven by an expected shortage personal protective equipment for health care workers and first responders.

They are NOT effective in preventing general public from catching #Coronavirus, but if healthcare providers can’t get them to care for sick patients, it puts them and our communities at risk!
https://t.co/UxZRwxxKL9

Even while reiterating the new guidelines on mask use during a COVID-19 news conference April 3, President Donald Trump said he wouldn’t actually be heeding the advice himself, saying: “I’m choosing not to do it.”

If an informal tally of Denverites out for a stroll or ride on a recent sunny afternoon was any indication of how prevalent the adoption of mask wearing has become, it is far from universal. There were many more uncovered faces than obscured ones, even as trails and paths filled up with moving bodies.

Shirking a mask — even when outside — is a mistake, Yale’s Soe-Lin told The Post in an email.

“I think the bigger deterrent is that people think if they’re outdoors they don’t need masks, which is not true,” she said. “It’s hard to consistently maintain six feet of physical distance especially when you need to pass someone or if they’re in a big group taking up the sidewalk, and if you’re asymptomatic you can be exhaling a lot of aerosols during physical exertion which can travel significant distances.”

But obscuring the face creates new complications. Kim Cordova, president of UFCW 7, heads the union that represents 17,000 grocery workers in Colorado. She is worried about employee safety at supermarkets.

“The downside of masks for our members is the potential for robberies,” she said.

Checking IDs for alcohol purchases is also trickier when masks are in use, she said.

Zhai, the CU professor, said society has to “balance the risks” when trying to negotiate the pandemic landscape.

“While (robberies) can happen, that doesn’t mean we don’t recommend the use of masks,” he said.

If history is any guide, Coloradans have always been reticent to cover their faces to stave off infection. During the 1918 Spanish flu that killed approximately 8,000 people in the state and tens of millions globally, one of the last orders given by Denver officials during that pandemic was to strap on a mask.

But the city’s directives were inconsistent, according to an authoritative account of the Spanish flu authored by Stephen Leonard, a history professor at Metropolitan State University of Denver. Citizens were told to wear masks in theaters but not churches, and in shops but not in hotels. Waiters needed to cover their noses and mouths, but diners did not.

US National Library of Medicine

Leonard wrote that the city’s mask order “irked people and was irregularly obeyed.” One saleswoman told the Rocky Mountain News that she didn’t like wearing a mask because it “caused her nose to fall asleep,” according to Leonard’s account.

Whether the use of masks ever becomes compulsory in Colorado — as has occurred in one form or another in Morocco, Germany, China and Austria — is yet to be seen.

But Jeff Stanley, a 68-year-old Denver resident who last week was walking around the city with a protective bandana tied around his face, said for him the decision to cover up wasn’t hard.