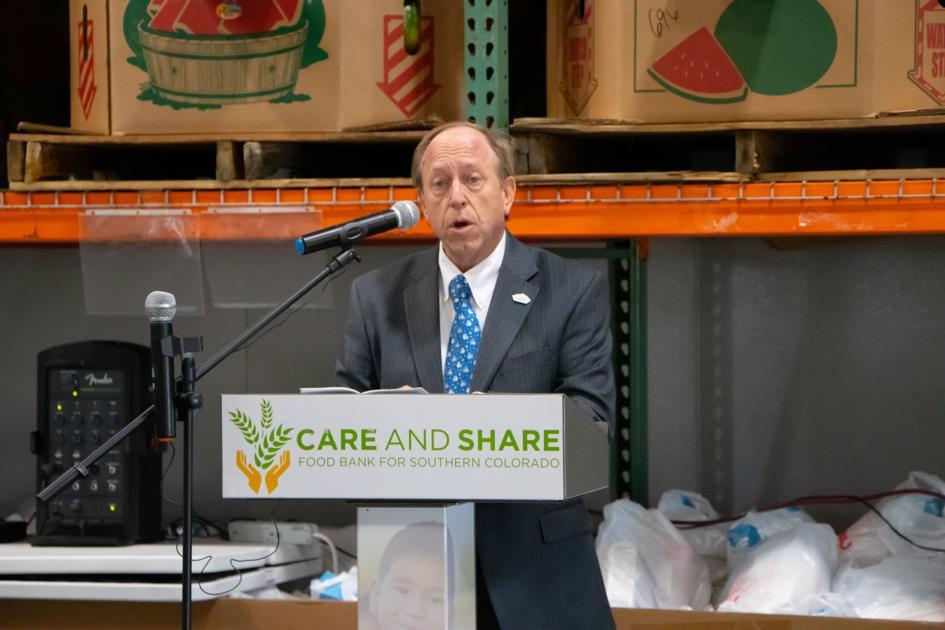 John Suthers has plenty of economic development wins as mayor — a massive Amazon distribution center and Southwest Airlines expanding to Colorado Springs to name two — but he called the loss of the U.S. Space Command to Huntsville, Ala., his biggest setback.

Suthers was highly critical of the decision, calling it a political favor to Alabama’s two U.S. senators, who championed President Donald Trump’s efforts to object to electoral votes for Joe Biden by Arizona and Pennsylvania, and Republican U.S. Rep. Mo Brooks, who represents the Huntsville area.

Brooks spoke at a Washington, D.C., rally with President Donald Trump Jan. 6, after which participants violently broke into the U.S. Capitol building. The mayor also called on Biden to overturn the decision after he replaces Trump Wednesday.

Economists and defense contractors said the decision won’t mean defense firms will abandon Colorado Springs for Huntsville, but the loss represents a “missed opportunity” that will slow future expansion by the area’s large defense industry. The region will still be home to much of the industry that underpins the military’s space efforts and plenty of other employers find Colorado Springs to be an attractive location. But economists still say the loss could be felt for years to come.

The Colorado Space Coalition, an arm of the Metro Denver EDC, estimates the command and its 1,400 military and civilian personnel pumps more than $450 million a year into the state’s economy. That is a bit more than 1% of the 2019 economic output generated in the Colorado Springs area and about 0.1% of Colorado’s economic output. While it is hardly a gamebreaker, the impact of the command’s move to Alabama more likely will be felt in the draw the command has for military contractors and related businesses.

“Being able to say we have the Space Command is powerful in bringing companies to the state — it has more impact on the perception of the state than in the raw numbers,” Broomfield economist Gary Horvath said. “It is a missed opportunity, but different than losing a company like Intel that was already in Colorado Springs and closed. That meant you lost all of the suppliers and their employees that may have totaled as many as 10,000.”

Horvath compared losing the command to other major economic development plums that slipped away from the state, including Amazon’s second corporate headquarters a few years ago and a major United Airlines maintenance facility in the 1990s. Both would have meant many thousands of jobs and an economic boost totaling much more than $1 billion, when adjusted for inflation. The Amazon project has been significantly scaled back while the United facility closed in 2003.

Colorado and Colorado Springs remain a key location for many major military space contractors, including Lockheed Martin, Northrop Grumman, Raytheon, among hundreds that operate in the state. Colorado also ranks as the nation’s top state for aerospace jobs on a per capita basis, though the total number of aerospace workers in Colorado is dwarfed by the work forces in California and Texas.

“These kind of companies have a strong supply chain and pay higher wages than most other employers, so their multiplier effect on the economy is twice as much as the average business,” Horvath said. “The impact also extends to colleges and universities with University of Colorado campuses at Boulder and Colorado Springs, Colorado State University, Denver University and the Colorado School of Mines all benefiting from civilian and military and civilian space spending.”

Tom Binnings, senior partner in Summit Economics, which has studied the economic impact of the military on Colorado Springs for decades, believes the decision may not be final and could be reversed after Biden replaces Trump. He expects Suthers, Colorado Springs Chamber & EDC CEO Dirk Draper and Colorado congressional leaders to push Biden to reverse Trump’s decision.

“Even without Space Command, Colorado Springs still has a high level of relevance for the military and space with Peterson and Schriever Air Force bases and the Cheyenne Mountain complex,” Binnings said. “The ease of attracting retired military to the (civilian) workforce and all the reasons that made Colorado Springs attractive to Space Command are still in place. The negative fallout won’t be that great, but it is a lost opportunity.”

Colorado Springs will remain the home of the Space Operations Command of the year-old Space Force and several of its largest units, called deltas, even if the Space Command decision isn’t reversed. Those units employ thousands of military and civilian workers as well as provide jobs for many contractors working with the branch on computer systems, software and many other projects.

Several of those contractors were surprised by the decision to move the command to Huntsville and are scrambling on how they will restructure their operations if the decision isn’t changed. Most defense giants already have operations in Colorado Springs and Huntsville, but smaller players based here are already studying whether they need to open offices in Alabama.

Kathy Boe, founder and CEO of Colorado Springs-based software systems and cybersecurity provider Boecore, said her company has operated a regional office in Huntsville for 12 years, though “our heart and soul is here.” She notes that the Space Force units and many space-focused facilities remain in Colorado Springs and will continue to generate work for defense contractors based here or with local offices.

“It is more about the additional jobs we could have gained (related to the command) rather than losing the jobs we have today. There is plenty of work for everybody right now,” Boe said. “The epicenter of military space won’t move out of here just because the headquarters is in Alabama. The risk in moving the command there is that there are so many technology jobs available nationwide that those workers have a choice of where they want to live. Many may not want to move.”

Kevin O’Neil, CEO of the O’Neil Group, which sold Braxton Science & Technology Group and owns space-focused Catalyst Campus near downtown Colorado Springs, said he is already considering building a Catalyst Campus in Huntsville as part of a larger plan to launch a network of such facilities in several states. Colorado Springs will remain the hub of the Catalyst network as it grows into a hub-and-spoke model, he said.

If the headquarters decision stands, “we will have no choice to open a dual office (in Huntsville). But I don’t see that we or other defense contractors would close offices here,” O’Neil said. “You will need to have a presence there (in Huntsville) to stay engaged with the customer and grow, but a lot of military contractors will continue to have offices here. I don’t see Lockheed or Raytheon moving operations from Colorado Springs. They already have a critical mass and are growing here. They just won’t grow as fast.”

O’Neil believes the incoming Biden administration should put the Space Command headquarters decision on hold and review whether moving the command “is what is best for the country. … I hope the Biden administration looks seriously at the cost and benefit to the nation of this decision. U.S. taxpayers have invested billions in infrastructure and facilities here, only to have to duplicate it in Alabama.”

Infinity Systems Engineering is looking at opening a Huntsville office, but only if it wins a major contract there later this year. The expansion would not be related to the Space Command headquarters move and would follow the company’s first satellite office that is scheduled to open by March 31 in Albuquerque, N.M., depending on when COVID-19 pandemic-related restrictions in New Mexico are loosened.

Dan Jaworowski, Infinity’s president, said he was disappointed with the headquarters decision and it would be “unfortunate if it was not based on merit. It would be hard for me to believe the cost (savings) of keeping the workforce here would be outweighed by the quality of the workforce and schools in Alabama.” He added the move would not “directly impact Infinity’s business and shouldn’t have a huge impact on the community though the secondary effect on (the local economy) isn’t insignificant.”

Seth Harvey, CEO of Bluestaq, said the Colorado Springs-based defense technology contractor doesn’t plan to open an office in Huntsville since most of its contracts are with the Space Force for work in Colorado Springs. He said he is “incredibly disappointed” by the decision, saying that the command’s headquarters would have been “an incredible force multiplier for our community.”

The command’s move won’t affect a $100 million project expansion under construction near the Colorado Springs Airport for Aerospace Corp., a nonprofit that handles research and development for the Air Force and Space Force. The building, planned for completion in spring 2022, will be able to accommodate 200 additional technical employees and will house the company’s Space Analysis and Collaboration Center, where contractors and military officials can try out tactics, techniques and procedures they would use when fighting a war in space.

“Overall demand for Aerospace’s support and expertise continues to grow each year, and we are well positioned to support U.S. Space Command as it establishes a permanent home in the coming years,” the company said Friday in an emailed statement. “We do not foresee any changes to our corporate plans and believe (the command) will continue to value Aerospace expertise as they do today.”

The demand for single-family homes, apartments, townhomes and the like has surged in recent years even without Space Command calling Colorado Springs its permanent home.

Nearly 4,500 building permits — a 15-year high — were issued in 2020 for the construction of single-family homes in the Springs and El Paso County, yet homebuilders have been hard-pressed to keep up with the demand for housing.

On the resale side of the market, meanwhile, monthly supplies of homes for sale have plunged to record lows. In December, just 530 single-family homes were listed for sale by local real estate agents. That shortage has led to bidding wars among frustrated buyers, while sellers field multiple offers sometimes on the same day their property goes on the market.

As a result, don’t expect the area’s housing demand to evaporate because of the potential loss of Space Command’s permanent headquarters.

“Will it have an impact? Yes, it will have an impact,” said Carrie Bartow, board president of the Housing & Building Association of Colorado Springs and a principal with the Springs office of a national professional services and accounting firm. “But not anything that I think we’re worried about. We have a lot of things happening in this city. First and foremost, no matter what, we still have a housing shortage. We have 500 or so homes currently on the (multiple listing service) for sale and an inventory that’s simply not enough.”

George Nehme, a real estate agent with The Platinum Group Realtors and board chairman of the Pikes Peak Association of Realtors, said Colorado Springs has too much going for itself right now — from the July launch of the downtown U.S. Olympic & Paralympic Museum, to this year’s opening of Amazon’s distribution center, to the arrival of discount carrier Southwest Airlines.

Getting passed over for Space Command won’t be enough to stall the city’s progress or the demand for housing, Nehme said.

“I don’t see the housing market taking a hit because of that,” he said of Space Command’s loss. “The demand is so high. I mean, seeing what our numbers are, with homes coming on the market and homes going under contract. The homes going under contract and pending (sales) are higher than what’s coming on the market. So builders are not able to keep up.”

The city’s economic strengths and desirability as a place to live, work and do business haven’t changed because of the Space Command announcement, said general contractor Vince Colarelli, who owns Colarelli Construction in the Springs.

“The fundamentals of our community remain strong, right? Colarelli said. “We were good before Space Command and if they leave, we’re going to continue to be strong.”