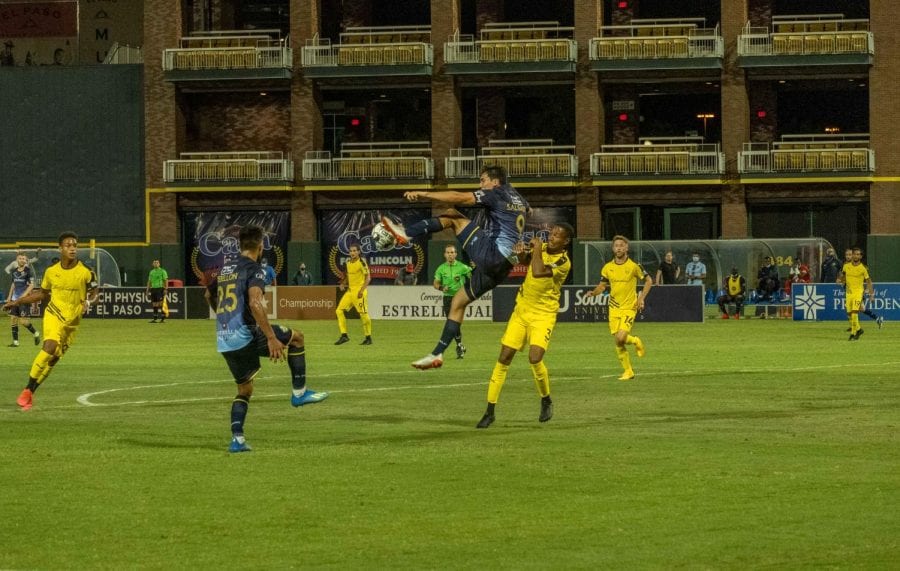 The El Paso Locomotive 1-2-2 take on the Colorado Springs Switchbacks 1-1-2 tonight in a battle for Group C second place.

After restarting the United Soccer League (USL) season with a win, the Locomotive has gone winless in its last three games and lost its last two contests. Neither team has had any success against Group leader New Mexico United with both teams going winless in three matches.

Coming off a 3-1 road loss to the Phoenix Rising, the Locomotive finds itself with an offense that is struggling mightily with only four goals in its last three matches. Defensively the Locomotive is coming off its worst performance of the season, giving up three straight goals in the first half versus Phoenix.

Offensively shot wise, the Locomotive controlled the game versus Phoenix with 23 shots to seven but as been the case all season, El Paso has not been able to capitalize and score.

Head Coach Mark Lowry felt his team‘s performance was its best all season and that at some point, the team will be able to capitalize on its offensive chances.

“There’s one area where we have to keep getting better at,” Lowry said. “We’re not there yet, but I believe if we keep doing what we’re doingand once we get there, the sustainable success will be evident and it will be good for us.”

Neither El Paso or Phoenix was able to score in the second half but being down by two goals does force a team to take less disciplined shots.

“We created a handful of chances but we are putting ourselves in a  bit of a pickle by giving up goals early giving up,” Locomotive defender Dylan Mares said. “We are having to dig ourselves out of a whole. It makes it more difficult… rushing situations because you know you need to score.”

With only the top two teams moving forward to the playoffs in each group, the matchup with rival Colorado could have significant postseason ramifications later on.

Colorado is coming off a last minute 2-1 loss to Real Monarchs SLC. Averaging one goal a game over four games this season, the Switchbacks have struggled offensively much like El Paso.

Not one player on either team is in the top 50 scorers in the league, so it could be a possible low scoring match unless the Locomotive suddenly start converting on shots. Controlling possession has been a forte for the Locomotive in every match to this point of the season, having the ball more than its opponent in each game.

One player that could help provide that spark is Locomotive forward Aaron Gomez, who has scored the lone goals for El Paso the past two matches. Gomez has taken six shots with four on goal and two scores.

For the Switchbacks defender Joan Cervos has been a standout on defense and has a goal and assist on the young season.

“We just need that one game or one moment when the switch flicks and the goals start pouring in,” Lowry said. “We feel like it will just take off from there. Colorado is a good team and will be tough; they will work hard. We need to be at our best.”

The Locomotive will no longer have MariosLomos at its disposal due to Lomos being transferred to North Carolina FCFriday. Lomos had been brought in for his scoring after the Locomotive lost leading scorer Jerome Kiesewetter to Miami FC of the Major Soccer League. After three starts and no goals, Lomos is no longer a member of the Locomotive are trying to win championships here. These guys were not up to the standard. And now they are gone. Simple as that,“ Locomotive General Manager Andrew Forrest said on Twitter.

The match starts 7:30 p.m. at Southwest University Field and will once again be played without fans in attendance. Espn+ and El Paso / Las Cruces CW will televise the contest.