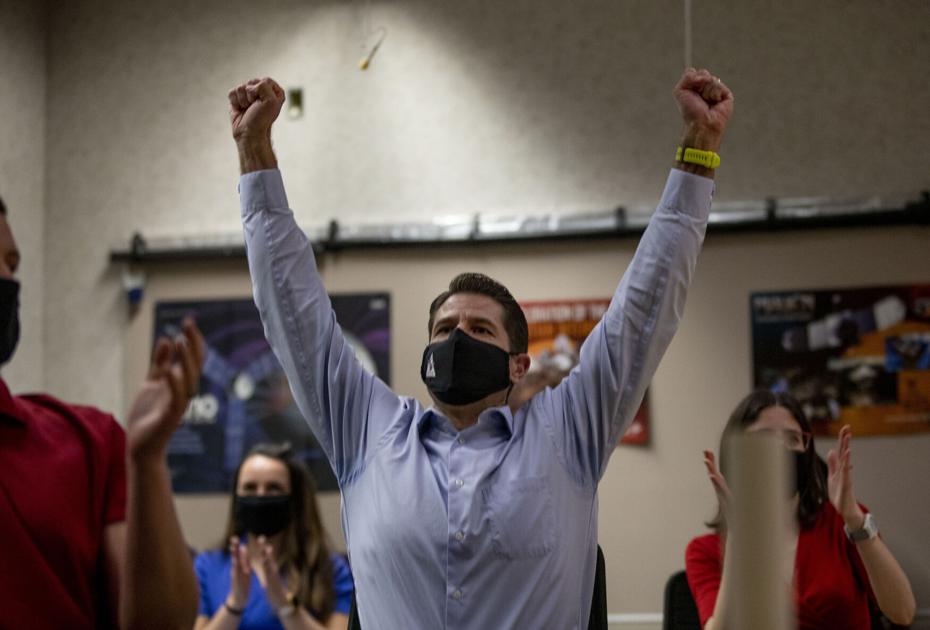 After more than five years of designing, testing, building and so much more testing, systems engineers at Lockheed Martin received their reward Thursday at 1:55 p.m. when NASA’s Perseverance Rover successfully landed on Mars.

The engineers built the “aeroshell” here in Colorado that carried the rover safely through the Martian atmosphere at speeds of 12,500 mph and temperatures as high as 2,370 degrees. On Thursday, they cheered:

The smiles were hidden behind face masks, but the joy was evident in their eyes.

“I was so happy the aeroshell maintained its signal throughout,” said Dan Zettler, lead design engineer. “That meant the heat shield did its job protecting all the internal machinery and instruments.”

There were “air high-fives” and “air hugs” all around as a limited group of Lockheed employees watched the live feed from NASA’s mission control in Florida at the company’s Waterton Campus southwest of Denver. It is home base for about 8,000 of the company’s 11,000 Colorado employees.

It’s also where the aeroshell was built, then shipped to NASA in December before taking off for Mars on July 31.

“We analyzed, tested and designed the aeroshell to handle 12 Gs, then we tested it a bit higher than that,” said Derek Shanon, lead structural analyst. “It ended up handling about 10 Gs.”

The Lockheed team that built the aeroshell in Colorado was made up of about 18 engineers and it began work with pre-ordering materials as far back as 2015.

The aeroshell is an oval structure that housed the rover, which is going to explore the Red Planet’s surface and collect samples for a future mission to bring back. The rover bottom was made of a heat shield, and the top was the “back shell” that held on to the rover until it was lowered to the surface by a rocket-engine powered “sky crane” with cables.

Right before the aeroshell entered Mars’ atmosphere, the group chuckled when the NASA official announced, “The vehicle thinks it’s in good shape to land” and the sigh of relief was audible.

Cheers and applause greeted every milestone announced by NASA, such as when the parachute deployed and when the heat shield was jettisoned.

After touching down, the rover successfully cut the cables, and the shell flew away – burning any remaining fuel and crashing on the surface somewhere.

Lockheed has built all of NASA’s Mars 10 aeroshells in Colorado.

According to NASA, Perseverance “will search for signs of ancient microbial life, collect carefully selected rock and regolith (broken rock and dust) samples for future return to Earth, characterize Mars’ geology and climate, and pave the way for human exploration beyond the Moon.”

“The rover is going to be landing in a crater called Jezero, which is in the delta of an ancient river inside a basin created by an impact with another body some 4 billion years ago,” said David Scholz, the principal engineer and head of the aeroshell team.

Asked if he was surprised at the mission’s success, he didn’t hesitate: “No.”

“There was definitely a lot of testing for all the mechanics performing correctly,” he said. “I was confident in our testing, so I was pretty sure it was going to go right.”

“I was so nervous, then relieved when it landed. We didn’t want to miss anything, or overlook anything that might jeopardize a critical mission to the United States,” Zettler said.

The crew was amazed by NASA broadcast images from Perseverance that showed its shadow on Mars and one of its tires. Communications between Mars and Earth took about 11.5 minutes to go from one planet to the other.

Before the landing, a different set of Lockheed employees were monitoring and sending commands to the three satellites orbiting Mars: Odyssey, Maven and MRO, which stands for Mars Reconnaissance Orbiter. All were built at the company’s Waterton Campus.

The MRO was reconfigured with a new software patch so it could “listen” and send data about the aeroshell back to Earth quicker. It will attempt to transmit pictures that might be available Friday or Monday.

MRO Mission Operations manager Kelly Bezjak said the teams sent commands to the satellites so communications were “as good as they could be.”

Odyssey will move over the landing spot and take pictures of the recently-landed rover.

“It’s huge just being a part of planetary exploration,” Scholz said. “I feel we’re really just dipping our toes in the water here. It’s quite humbling.”