Just four Colorado cities use ranked-choice voting. Democratic lawmakers want to make it easier for others to adopt. 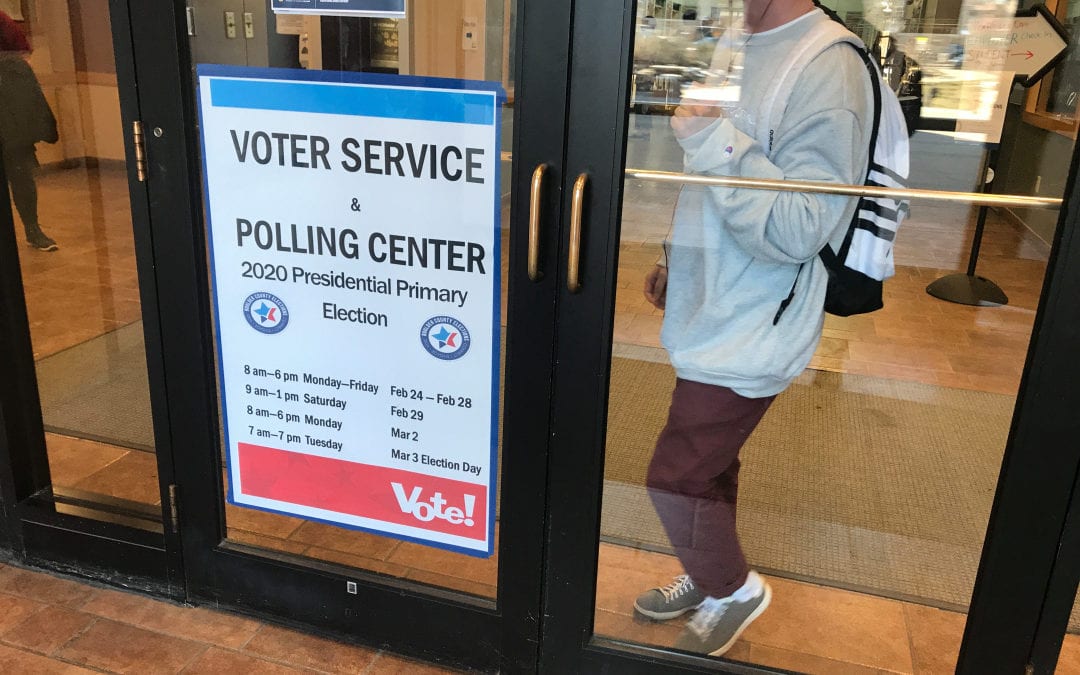 It’s a relatively rare way to vote in the United States, but a group of Democratic state lawmakers want to make it easier to use ranked-choice voting to elect leaders in Colorado cities.

Here’s how it works: instead of casting a vote for a single candidate, voters rank candidates in order of their preference. The votes are tallied based on each voter’s first choice, and if a candidate gets a majority, they win outright.

But if no candidate gets a majority, contenders with the fewest votes are eliminated in rounds, with their votes redistributed to the next highest-ranked candidate on voters’ ballots. That continues until one candidate receives a majority.

Proponents of ranked-choice voting, also known as instant-runoff voting, say the method gives voters more of a say, eliminates the need for expensive run-off elections and ensures a winner receives a majority of votes, proving their broad support.

“In my suburb of Lakewood, it is pretty easy to get on the ballot for city council … and so it’s pretty common that we have three or four or more candidates running,” said Rep. Chris Kennedy, a Democrat. “And in those scenarios, it’s very common that the person who wins has 30- or 40-something percent of the vote, but rarely do they get a majority.”

Colorado municipalities can already implement ranked-choice voting, and so far four have adopted the new method. Boulder residents will elect their mayor with the ranking system starting in 2023, and the mountain towns of Telluride and Basalt currently use the method in some municipal elections. Carbondale adopted ranked choice voting in 2002, but has yet to implement it in an election.

But so few cities use the method in Colorado that it can be expensive and hard to implement.

“Most cities do not have their own voting machines — they run a coordinated election with their county,” Emma Donahue, political director for Ranked Choice Voting for Colorado, testified before the House Finance Committee on Thursday. “A hand count is fine in Basalt or Telluride, but I don’t think Boulder wants to do that, nor anyone else.”

That’s where House Bill 1071 comes in. The legislation would make it easier for cities to adopt the method by requiring Colorado’s Secretary of State to establish minimum standards and requirements for a new voting system that would allow for ranked-choice voting, such as certifying the software municipalities can use.

Under the proposal, the Secretary of State’s Office would bear some of the biggest costs — developing and upgrading software to count votes and conduct election audits — which would make it possible for cities, particularly those that fall into more than one county, like Erie and Aurora, to hold an election using ranked-choice voting on the same ballot as other races.

“Part of the reason there are so few [cities using ranked choice voting] is it’s so costly to do it under current law,” said Kennedy, a prime sponsor of the bill.

Although ranked-choice voting has been used by American cities at various points over the last century, it started to gain traction again in the past two decades, according to the National Conference of State Legislatures.

Currently, 20 U.S. cities and towns use the voting method in local elections, according to FairVote, including Minneapolis and St. Paul in Minnesota, and Oakland and San Francisco in California, with several other cities set to implement it in the next few years. In 2020, Maine became the first state to use ranked-choice voting for a general presidential election.

The Broomfield City Council is currently discussing whether to adopt the voting method, while in Denver, a city charter committee is considering ranked choice voting along with other election reforms.

Aspen voters, meanwhile, approved ranked-choice voting in 2007, but then voted to repeal the system in November 2010 over frustrations with the logistics of implementing it.

House Bill 1071 only applies to municipalities and nonpartisan races, and implementing ranked-choice voting would continue to be optional.

State Rep. Jeni Arndt, a Fort Collins Democrat and another prime sponsor of the bill, argues the alternative voting method discourages polarization and eliminates the effect of a “spoiler” candidate drawing votes away from major party candidates.

“If you’re campaigning in a nonpartisan race, and you’re talking to a potential voter, they may not vote for you, but they may vote for you as their second choice,” said Arndt, who is running to be mayor of Fort Collins. “The places that have done this … the candidates say it lends to a more civil race, because you’re reaching every person and listening almost twice as hard.”

Advocates also cite research, based on four cities that have adopted ranked-choice voting in California’s Bay Area, showing more women and people of color have run for office and have a higher probability of winning under the voting method.

“So there is proof out there that this has shown to be more inclusive, more equality, and really gives voters better satisfaction in their voting system,” said Donahue, of Ranked Choice Voting for Colorado.

The legislation has received support from a number of groups, including League of Women Voters Colorado, Colorado Municipal League and Municipal Clerks Association.

Rep. Colin Larson, a Littleton Republican, said he’s intrigued by ranked-choice voting and believes Colorado would benefit from election reforms. But he’s concerned a big shift in elections would confuse voters and have a negative impact on participation.

“The reality is there are a lot of voters that aren’t that sophisticated when it comes to understanding elections,” he said. “And ranked-choice voting, just because it’s something new that people aren’t engaged on to begin with, I do worry, at least initially with implementation, it could be very confusing.”

The 64 counties that make up the Colorado County Clerks Association have also expressed concerns about how a shift could impact voter turnout, according to Executive Director Matt Crane, who is also a former Arapahoe County clerk and recorder.

Clerks have voiced skepticism that, with limited data on the relatively few jurisdictions that have adopted ranked-choice voting nationwide, many of the purported benefits won’t materialize.

“It doesn’t always lead to a 50%-plus-one winner,” Crane said. “And there’s some data … that it’s had a negative impact on participation from people of color and older people.We’re studying that and we want to make sure that a change to the election policy, it’s going to be a productive change.”

The association’s membership has taken an “amend” position on the legislation, meaning the group would like to see changes.

Kennedy said many of those issues can be addressed with a robust voter education campaign, which the bill requires but leaves up to municipalities and counties to conduct and fund.

“I think one of the things that has been learned … is if you have a good voter education campaign, a multilingual campaign, and if the ballot design is right, you don’t see a turnout drop,” Kennedy said.

The Secretary of State’s office has taken a neutral position on the legislation, but has concerns about costs.

The bill would cost the agency nearly $1 million over three years, largely due to software and tech upgrades needed to conduct ranked-choice voting elections in cities that cross county lines, according to a fiscal analysis by nonpartisan legislative staff. (Aurora, for instance, is in Adams, Arapahoe and Douglas counties.)

Sixty-two of Colorado’s 64 counties use Dominion’s Democracy Suite, which already has the capability to add ranked-choice voting to its software, meaning the Secretary of State could upgrade that software and reach most Colorado cities. The remaining two counties, Douglas and Garfield, use another system and wouldn’t be required to participate under this bill, said Kennedy.

Amendments to the bill have already been made based on concerns raised by the Secretary of State, including pushing back the date that municipalities in multiple counties can adopt the voting method to 2025. That’s to give election officials more time to upgrade its auditing software.

“I’ve talked to experts who say this is doable, it just takes time,” Kennedy said.

The expenses would be entirely funded through the agency’s cash fund, which would require fee increases on Colorado businesses and charities, according to John Magnino, director of government and public affairs for the Secretary of State.

“Without an alternative funding source, the cost of this bill would force us to raise fees on Colorado businesses to ensure that our cash fund expenses were balanced by our cash fund revenue,” Magnino said in remarks to the House Finance Committee.

“While this extension of implementation allows us to spread the cost over more years, it still represents a significant expense that would require us to increase fees in order to generate additional revenue,” Magnino said. “We would be better positioned to support this bill fully if a different source of funding were identified.”

If the Secretary of State were to increase fees to pay for the bill, Colorado businesses would see a one-time increase of $1.25, according to Kennedy’s own calculations. “It’s pretty manageable,” he said.

It will also depend on whether the legislature passes any other bills this year that will impact that fund, which won’t be clear until later this year.

So far the bill doesn’t have bipartisan support, according to Kennedy. “I really don’t think this benefits one party more than the other. I think it makes sure whoever the majority of voters believe in is going to win the race,” he said.

Larson was among four Republicans who voted against advancing the bill out of the House Finance Committee, citing the potential cost to businesses.

“Even though it’s a fairly nominal amount, I don’t think now is the time we should be prioritizing implementing a new election system,” said Larson. “I definitely do not think 2021 is the year to be raising fees on businesses.”

The legislation now heads to the House Appropriations Committee.