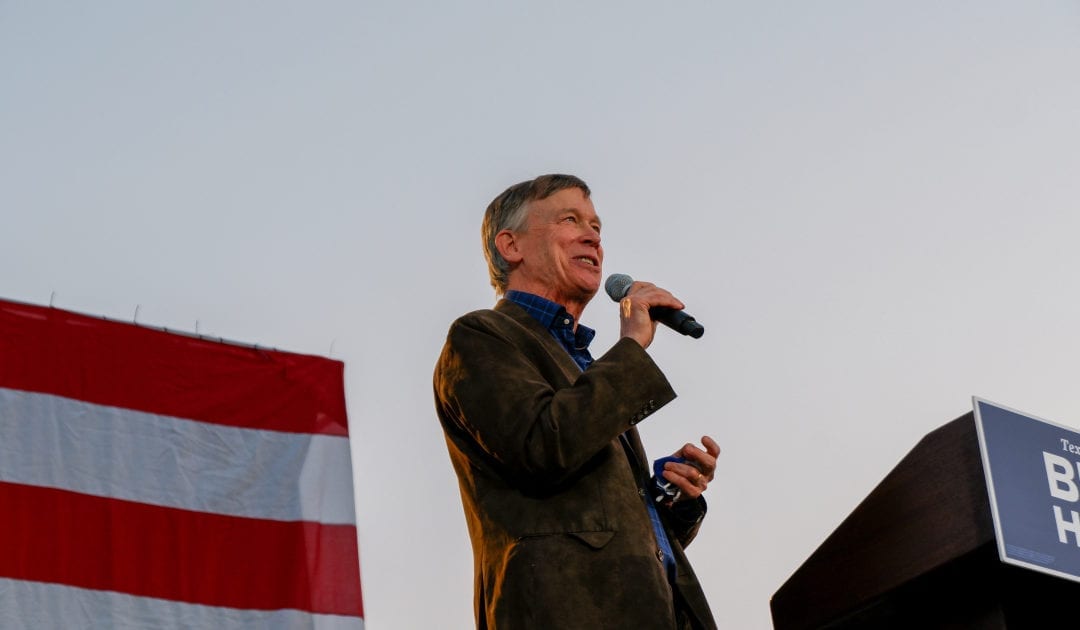 The Democratic victory Tuesday put the party in position to take control of the U.S. Senate, but the balance of power still hinges on races in other key battleground states.

Hickenlooper led Gardner with 54% of the vote to Gardner’s 44%, according to preliminary returns with more than 80% counted. He ran up the score in liberal havens of Denver and Boulder and won clear victories in the suburban counties where Gardner underperformed his prior marks.

Less than an hour after polls closed, Gardner conceded in a speech — broadcast on his campaign website — that listed his legislative accomplishments and service.

“Please understand, to all the people who supported our efforts tonight, that (Hickenlooper’s) success is Colorado’s success, and our nation and our state need him to succeed,” Gardner said in his concession speech. “We need to be united together.”

Hickenlooper’s win gives Democrats both U.S. Senate seats in Colorado and the party universal control on the state’s levers of power for the first time since 1936.

He addressed his supporters on Facebook Live shortly soon after Gardner conceded and said voters send a message “loud and clear — it’s time to put the poisonous politics of this era behind us and come together to move forward.”

“We’ve got to get Washington working for everyone,” Hickenlooper continued. “Regardless of which party ends up controlling the Senate, I want you to know I will work with anyone and everyone to help Coloradans.”

Hickenlooper thanked Gardner for his service and appealed to his supporters. “I want to say to everyone who voted for him: I’ll be your senator, as well,” Hickenlooper said.

From the start, Gardner’s close ties to Trump — who lost in Colorado for the second time — plagued his campaign, one made even more difficult by the state’s demographic shift toward Democrats since he took office

Gardner’s defeat is the first in his 15-year tenure in public office, dating back to the state legislature and U.S. House. He won a surprise upset against Democratic incumbent Mark Udall in 2014, promising Colorado voters that “when my party’s wrong, I’ll say it.”

He put little distance between himself and a president that he once called a “buffoon” and refused to support in 2016. But Trump’s transformation of the Republican Party left him little room to maneuver as the state shifted blue, and he endorsed the president in January 2019.

His support for the president helped him to pass major legislation, including the Great American Outdoors Act and a bill creating a national suicide hotline. Gardner also voted to confirm three conservatives to the U.S. Supreme Court, including Colorado’s Neil Gorsuch.

But those same ties to the president also led to Gardner’s undoing. Hickenlooper and Democratic allies used Gardner’s conservative record to escalate a years-long campaign to erode his support.

Hickenlooper — who initially pursued a failed bid for the Democratic presidential nomination and said he wouldn’t like the Senate — linked Gardner to Trump at every turn and blasted the White House response to the coronavirus crisis as he pushed a message of change and the need for compromise in Washington.

He cast aside a challenger from his political left in the Democratic Party primary earlier this year and ran a low-profile campaign during which he avoided public appearances, allowing him to skip tough questions and missteps that could have derailed his momentum.

The national Democratic establishment — which recruited Hickenlooper to run in a once-crowded primary — rallied to his side in the end. He broke Colorado fundraising records with nearly $40 million collected through Oct. 14, compared with nearly $27 million for Gardner. And Democrats groups spent $15 million in the race, using about $10.5 million on negative ads against Gardner.

Outside Republican political groups worked to even the score, pouring nearly $21 million into the contest. The bulk of the money — $18 million — went toward attacks on Hickenlooper that focused on his two violations of the state’s ethics laws earlier this year and ties to corporate interests.

The attacks worked to erode Hickenlooper’s image in voter’s minds, but didn’t shift the race.

The reason, said former Gov. Bill Ritter, Hickenlooper’s predecessor, because of his popularity from two terms leading Colorado. “Even though this campaign has sullied some things about that, he was still very well liked by Coloradans when he left office — and it wasn’t that long ago,” Ritter said.

Gardner’s loss is a huge blow for Colorado Republican Party

Gardner’s loss is the latest in a series of stinging defeats for the Colorado GOP at the top of the ticket over the past two election cycles.

For years, Gardner was considered one of the state’s most talented Republican politicians, even if he took flak from hardcore conservatives at times for not being more vocal in his support for the president.

“It hurts,” Tyler Sandberg, a Republican consultant in Colorado, said of the loss. “In 2014, Cory charted a path out of the wilderness for Republicans on a statewide basis after a string of losses going back to 2006. He showed that it was possible to win statewide with an optimistic message and the willingness to put in the hard work.”

Former Interior Secretary Ken Salazar, a Democratic ally of Hickenlooper’s who also served in the U.S. Senate, attributed Gardner’s defeat to the Republican losing his way.

“Cory made the decision to embrace the politics and the pressures of Donald Trump and Mitch McConnell in the U.S. Senate, as opposed to forging his own independent way representing the people of the state of Colorado,” Salazar said.

Gardner’s campaign knew going into the 2020 election season that the president’s unpopularity in Colorado would make it a tough battle.

Likewise, Gardner’s approval rating this year never hit positive territory and his disapproval numbers averaged 12 percentage points higher. The landscape meant the senator’s best chance for reelection was to eke out a victory by holding the Republican base intact and persuading enough unaffiliated voters in the middle to give him another term.

To walk that fine line, Gardner touted his congressional record to Colorado voters, namely through the passage of the Great American Outdoors Act, which provides money for public lands projects and dollars for National Parks repairs.

Gardner’s campaign believed the race was beginning to tighten heading into September — which was confirmed by public polling — and the candidate was hopeful to move to within striking distance in the weeks before Election Day.

That all changed when U.S. Supreme Court Justice Ruth Bader Ginsburg died in mid-September. The prospect of a strong conservative majority court energized Democrats and boosted his fundraising and poll margins, putting the race out of reach for Republicans.

In the end, Gardner’s strategy never permanently moved the needle.

Claire Roberts, a 38-year-old Denver Democrat, voted for Hickenlooper on Tuesday largely because she thinks Gardner is “a Trump puppet.” She said she especially disapproved of Gardner’s recent vote to confirm Amy Coney Barrett to the U.S. Supreme Court.

Hickenlooper’s campaign expected Gardner to sell more of his record, but the Republican stayed focused on his public lands work.

“I don’t think he ran a good campaign,” said Alvina Vasquez, a Democratic consultant who ran a dark-money group against Gardner this cycle. “Cory Gardner voters are Trump voters, but he didn’t draw anybody new in.”

Earlier in the campaign, Hickenlooper ran into some trouble during the Democratic primary against former Colorado House Speaker Andrew Romanoff. But, in the end, he was able to glide toward his party’s nomination.

From there, Hickenlooper spent the general election talking about his record as governor helping guide the state through disasters like fires and floods, all while taking aim at Gardner’s record, especially his votes to repeal the Affordable Care Act.

Because of the coronavirus crisis, his public schedule was limited. During three debates with Gardner, Hickenlooper was able to dodge the incumbent’s relentless punches and stay on his feet. And Gardner only confirmed the attacks against him when he called Trump an ethical and moral man.