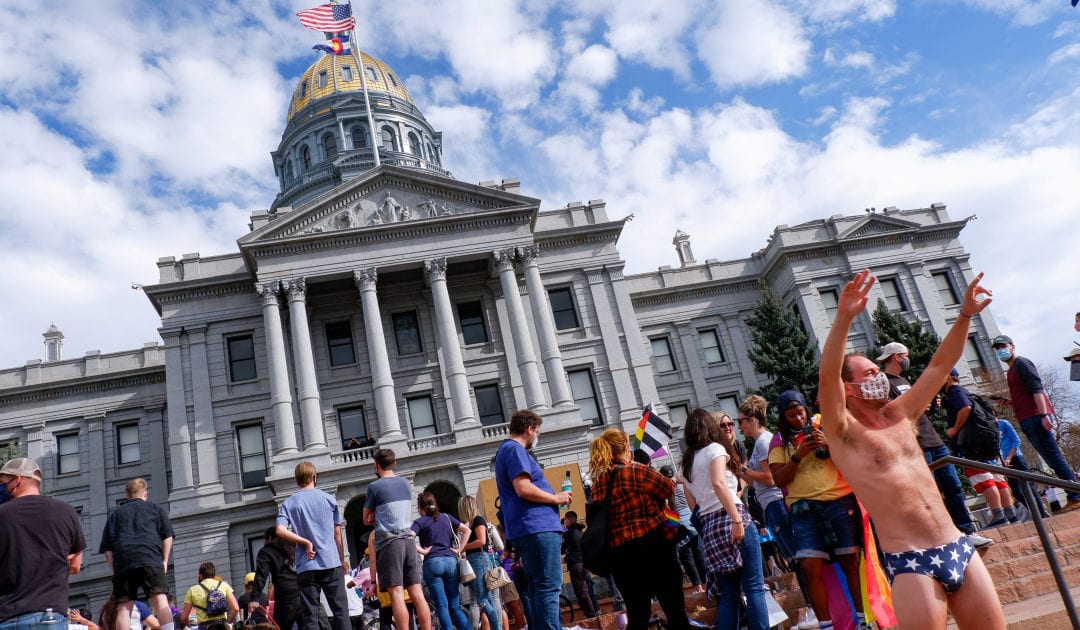 John Warner stood on the west steps of the Colorado Capitol on Saturday clad in nothing but an American flag Speedo bathing suit  and raised his arms in triumph.

He was basking in President-elect Joe Biden’s victory.

“It’s just the first time in awhile it feels like you can breathe,” the 40-year-old Denver Democrat said. “It’s been emotionally completely draining.”

Across Colorado supporters of Biden and Vice President-elect Kamala Harris celebrated and let out a sigh of relief Saturday as the presidential race was called in the Democrats’ favor. As soon as President Donald Trump’s loss was announced, people in liberal-leaning neighborhoods across Denver stepped outside to cheer, whistle and bang together pots and pans in celebration.

By mid-morning, a crowd of supporters overtook Lincoln Street along the west side of the Colorado Capitol, waving American flags and hollering as honking cars sped by sharing in their enthusiasm. Biden and Harris supporters also sprawled out across the lawn, many in masks and holding up campaign signs. Some even jumped up and down, unable to contain their excitement.

As noon approached, so did a few Trump supporters, who brought their own flags and signs to protest the election results. Just a couple of demonstrators trickled into the sea of Biden supporters at first, but they were quickly joined by dozens of Trump followers, and then, state police officers in riot gear.

The morning of jubilation devolved into a tense standoff between Trump and Biden supporters, with a row of officers in riot gear standing behind yellow police tape to form a barrier between the two sides. The two groups traded insults and chants that grew more tense into the afternoon.

Lisa Jenkins, of Englewood, stood with fellow Trump supporters while holding a handmade sign that read “Stop the Steal,” referencing demonstrations across the U.S. in support of Trump and questioning the election’s outcome. Jenkins is hoping for a recount, describing the election as fraudulent. (There has been no proof of any impropriety.)

Jenkins sees Trump as an accomplished president who prevailed through a lot of scrutiny. Biden, on the other hand, has shown a lot of racism while Democrats have been the ones dividing the country, she said.

“It’s scary,” Jenkins said as protesters continued to lash out at one another nearby. “I grew up here, and this is not the Colorado and Denver that I knew. I feel like the Democrats have caused all this racial tension and division.”

She added that Democrats are promoting rioting and telling the police to stand down.

In her own demonstrating on Saturday, Jenkins aimed to be peaceful. Her message to the country is clear: it’s time for a recount. That, or lawsuits being filed, will bring the truth to light, she said.

“Maybe the truth will come out,” Jenkins said, “and maybe we’ll get four more years of Trump.”

Jeremy Russell, who voted for Biden, expected the kind of tension that was boiling over at the Capitol, anticipating that Trump supporters who wouldn’t accept the election results because of the messaging from the president’s Twitter account in the last few months. Russell and his husband, Hugo Diaz, said it seemed Trump was using tweets that called into question the legitimacy of voting and the count as an insurance policy. If he did not win, he had an excuse to fall back on, they said.

But the mounting tension didn’t do much to dampen the spirits of Russell and Diaz, who found themselves relieved when they learned of Biden’s victory.

“I think as a nation, everything’s been struggling and hurting for so long that this is a huge weight lifted off our shoulders,” Russell, 29, said.

The couple, who live in Denver, is optimistic about much of Biden’s agenda, including his attention to climate change and his commitment to passing bipartisan legislation. Most of all, they’re putting their faith in the president-elect to reunite a country that has been bitterly divided.

Both Russell and Diaz, 28, see Biden as the kind of leader who can sew the country back together and one who can steer the country out of the pandemic, relying on science to do so.

“He’s going to get this pandemic under control,” Russell said. “I truly believe that.”

The couple’s sense of relief came at the end of what played out as a long election week, with the waiting game taking a toll on the two. Even as they see the president creating doubt in the Democratic process, they remain loyal to that process, one that elected the candidate who is going to “take us forward for the next four years,” Russell said.

Another Biden supporter, Rebecca Morales, learned who the next president would be while in bed and didn’t waste any time getting dressed and heading to the Capitol. With her dog, Fifi, at her side, Morales, 60, handed out American flags to other Biden supporters congregating downtown. She stood out from the crowd as she wove through it, wearing red, white and blue pants that matched beads around her neck, ribbons in her hair and a mask over her mouth.

Morales, who immigrated to the United States from Guatemala and now lives in Denver, distributed flags to reflect a sense of liberty.

Her faith in God pulled her through the election and gave her hope that Biden would secure a win. She is now pinning her hope on Biden healing the country from its polarization.

“He’s going to bring the families together,” Morales said.

She’s looking forward to turning the page from Trump’s four years in office.

In Colorado Springs, conservative commentator Michelle Malkin stood on the steps of city hall and questioned the election results, even though there have been no confirmed reports of wrongdoing. She was there as part of a “Stop the Steal” protest.

“We need to raise hell,” she said. “You don’t just roll over when people cheat and lie and steal.”

Gov. Jared Polis, in a statement congratulating Biden and Harris on their win, sought to allay baseless fears about the election results being spread by Trump.

“What makes America extraordinary is that our elections are safe and secure and that the results reflect the will of the people,” he said.

Back in Denver, Wendy Matthews, a Denver Democrat, was among those gathered at the Capitol. She said she came to “celebrate the end of the tyranny, the hypocrisy, the utter lack of respect for women, for people of color.”

“At least we won’t be the laughingstock of the world anymore,” she said.

Matthews was with Nikki Bernal, an unaffiliated voter who lives in Denver and voted for Biden and Harris. Matthews said she decided to head to the Capitol in part because she knew that Trump supporters would be there questioning the election results.

“We’re here to witness and support,” she said.

Matthews said she is filled with “relief and trepidation” about the Biden win. She’s worried about Senate Majority Leader Mitch McConnell staying in power and what that will mean for the country.

“I still think there is work to be done,” she said.

Warner, the Speedo-clad Biden supporter, said he was so glad to see so many people celebrating the election. Speaking through a mask covered in tiny Ruth Bader Ginsburg faces, he said he was confident Biden would win, “but not overconfident.”

“The last time I was down here was part of the Black Lives Matter protest,” Warner said. “It’s just a very different feeling. Obviously you still have a divided country, but it means a lot to be able to have solidarity with people that have been weathering, really, just an oppressive storm.”

Biden supporter Michael Nunez, of Denver, surveyed the celebration on Saturday morning and was moved by how people of different races, sexualities and genders came together to elect a new president.

“We did it,” Nunez chanted near the base of the Capitol steps, with both fists in the air in triumph.

He spent at least a few hours cheering with his partner at the Capitol, where the two headed after hearing cheering and honking while in their new home in Capitol Hill.

Nunez, 37, hopes the country also flips the Senate in January.

“This is step one, and then we’re going to take our next steps,” he said.

As someone who is high risk for the coronavirus and who lost his job because of the pandemic, Nunez is looking to Biden to steer the country through a recovery. Among his top concerns is pumping more COVID-19 stimulus dollars into the economy.

For the moment, he just wants to celebrate and breathe a sigh of relief that’s been a long time coming.

“Today feels now like I can finally take a breath,” Nunez said. “Everything else before that has felt like you’re just waiting to exhale.”