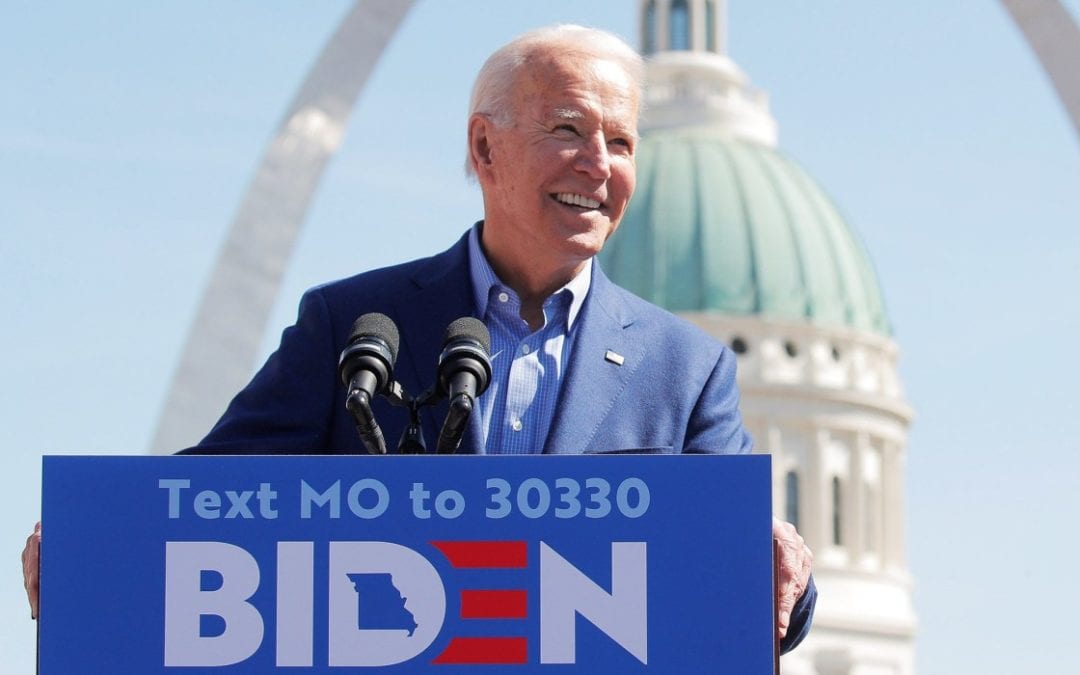 Joe Biden would be the oldest person ever elected president, and as I noted Tuesday, he is also running a familiar kind of “old warhorse” candidacy that has never succeeded. That’s not the only way in which Biden (or for that matter Bernie Sanders) would be a historically unique Democratic nominee. As a former senator from Delaware and a senator from Vermont, Biden and Sanders would each also be the first presidential nominee in history from one of the smallest states in the nation. Delaware and Vermont are the 45th-largest and 49th-largest states in the U.S., respectively, and each has just the minimum three electoral votes.

Sixteen major-party presidential candidates have come from states with fewer than ten electoral votes. Only six of them have won the White House, and three of those were war heroes. The 16 small-state nominees, in ascending order from the smallest home state by share of the Electoral College to the largest, are:

1. George McGovern, 1972, South Dakota (4 EV, or 0.7 percent of total EV): LOST 520–17. There were eight states (counting D.C. for these purposes as a “state”) with fewer electoral votes than South Dakota in 1972. McGovern lost his home state by nine points. McGovern’s incumbent opponent, Richard Nixon, won his home state of California — the nation’s largest — and collected its 45 electoral votes along with those of 48 other states, losing only Massachusetts and D.C.

2. Barry Goldwater, 1964, Arizona (5 EV, 0.9 percent of total EV): LOST 486–52. There were 16 states (again counting D.C.) with fewer electoral votes than Arizona in 1964. Goldwater carried Arizona by one, but lost every neighboring state. Goldwater’s incumbent opponent, Lyndon Johnson, won his home state of Texas and its 25 electoral votes on the road to his own landslide.

3. John C. Frémont, 1856, California: (4 EV, 1.4 percent of total EV): LOST 174–114. Yes, California was once a small state; there were only two states with fewer electoral votes in 1856. Frémont represented a brand-new political party (the Republicans) in a three-way race, with a former president — Millard Fillmore, from the then-largest state in the union — running under a third party’s banner. The 43-year-old Frémont wasn’t originally from California and lived in Manhattan during the election, but he had spent a year as one of California’s first two senators. Frémont lost California (then the only state west of Texas) by 16, and lost everything south of the Ohio River.

Home states mattered less in 1996. Both candidates were from the same-size state. Clinton was the incumbent. Dole — much like Biden — had been a national figure for decades, a vice presidential candidate and Senate majority leader. Dole won Kansas by 18, and every state bordering Kansas or Arkansas went the same way it did in 1992. Dole was unable damage the popular Clinton, who cruised to reelection.

7. James G. Blaine, 1884, Maine (6 EV, 1.5 percent of total EV): LOST 219–182. There were nine states with fewer electoral votes than Maine in 1884. 1884 is, as I have previously detailed, the presidential election in which the winner’s home state was the most decisive. Grover Cleveland won it entirely on the strength of carrying New York, where he was the governor. It was the largest state in the union and the most closely divided in the election, and its 36 electoral votes put Cleveland over the top. Blaine easily carried Maine, New Hampshire, Vermont, and Massachusetts, but Cleveland added neighboring Connecticut and New Jersey to his tally, supplementing his party’s southern base.

8–9. Dwight Eisenhower, 1952 and 1956, Kansas (8 EV, 1.5 percent of total EV): WON 442–89 and WON 457–73. There were 17 states with fewer electoral votes than Kansas in 1952 and 1956. Eisenhower was much more a national than a regional figure after his role as one of the architects of the Allies’ victory in the Second World War. By the time of the 1952 election, he was a resident of New York City (where he was president of Columbia University) and detailed to Paris as the first supreme commander of NATO. Except for a few tours at Fort Leavenworth, he hadn’t lived in Kansas for any length of time since enrolling at West Point in 1911.

In 1952, Eisenhower won his home state by 38 points, won every neighboring state but Missouri and Arkansas, and carried his opponent’s home state of Illinois (a feat he repeated in 1956). He also carried Texas, the state of his birth, and its 24 electoral votes, becoming the first Texas-born president. His 53–47 victory in Texas in 1952 was especially impressive coming after five straight elections in which Democrats had carried the state by 40 or more points. If there’s any hopeful parallel here for Biden, it’s to his ancestral home in Pennsylvania, a state that hasn’t sent a native son to the White House since James Buchanan.

10. William Jennings Bryan, 1908, Nebraska (8 EV, 1.66 percent of total EV): LOST 321–162. Bryan actually appears twice on this list; his 1896 and 1900 campaigns are No. 14 below. There were 19 states with fewer electoral votes than Nebraska in 1908, and 18 with fewer in 1896 and 1900. Each successive Bryan campaign saw diminishing returns. In 1896, he carried Nebraska by five points and all but one neighboring state, Iowa. In 1900, he held only Missouri and Colorado, and lost Nebraska by three. In 1908, he carried Nebraska and neighboring Colorado narrowly. In 1896 and 1900, William McKinley claimed the 23 electoral votes of his home state of Ohio. In 1908, William Howard Taft did the same. Republican dominance of the more heavily populated Northeast and Midwest outweighed any of Bryan’s efforts to add a Great Plains geographic base to the solidly Democratic South.

11. Franklin Pierce, 1852, New Hampshire (5 EV, 1.69% of 296): WON 254–42. There were seven states with fewer electoral votes than New Hampshire in 1852. Other than Bill Clinton, Pierce is the only true small-state politician to win the presidency. Pierce was a known quantity in D.C., having spent a decade in the House and Senate, and he had been a general in the Mexican War. He was also as closely associated with New Hampshire as Clinton was with Arkansas: He had been the speaker of the statehouse and chairman of the state Democratic Party, and his father had been governor. New Hampshire was the most reliable of Democratic states at the time, voting for Democrats by wide margins in every election from 1836 to 1852, including 1840 and 1848, when its New England neighbors did not.

Pierce’s opponent, Winfield Scott, was a national war hero only vaguely associated with his home of New Jersey or his birth state of Virginia, both of which he lost easily. His party, the Whigs, was badly divided over slavery and would never field another candidate. Pierce won New Hampshire by 25 points, the same margin as his party’s losing candidate in 1848, but Vermont and Massachusetts were two of only four states carried by Scott. Pierce got just under 30 percent of the vote in Vermont. As it turned out, he would be the last Democrat to carry New Hampshire until 1912.

12. Alf Landon, 1936, Kansas (9 EV, 1.69 percent of total EV): LOST 523–8. There were 23 states with fewer electoral votes than Kansas in 1936, so it is hard to argue it was a truly small state. Landon was in any event a sacrificial lamb who got massacred by Franklin D. Roosevelt at the pinnacle of the New Deal coalition. He lost his home state by almost ten points and every neighboring state, while FDR carried his home state of New York, as he did in each of his four successful campaigns for the presidency.

13. Lewis Cass, 1848, Michigan (5 EV, 1.72 percent of total EV): LOST, 163–127. The 1848 campaign of Louisiana’s Zachary Taylor, who defeated Cass that year, actually comes in at No. 15 on this list. There were seven states with fewer electoral votes than Michigan in 1848, eight with fewer than Louisiana. Like Eisenhower and Scott, the Virginia-born, Kentucky-raised Taylor was a political rookie more associated with the Army and his campaigns in Texas than with his home state, although his plantations in Louisiana reassured Southern Whig voters that he was no abolitionist. He lost Virginia and the newly admitted Texas to Cass, but flipped Louisiana and Georgia from the Democratic column and carried Kentucky, Tennessee, North Carolina, and the new state of Florida. Louisiana, Georgia, and Florida were enough to provide him a margin of victory.

Cass, for his part, carried his home state of Michigan and all the neighboring states, flipping Ohio and winning newly admitted Wisconsin. But the Democratic strategy of building a Solid Northwest was undone in the Northeast, because former Democratic president Martin Van Buren ran as a Free Soil candidate. Van Buren siphoned off 26 percent of the vote in his home state of New York, which flipped it and its 36 electoral votes to Taylor, and won enough votes to throw Massachusetts and Vermont to Taylor as well.

In a matchup of two small-state candidates, both got significant mileage out of their home regions, and the large-state spoiler candidacy of Van Buren was the difference.

16. George McClellan, 1864, New Jersey (7 EV, 3.0 percent of total EV): LOST 212–21. Even with the South seceded, there were still eleven states with fewer electoral votes than New Jersey in 1864. George McClellan, the ex-commanding general of the Army of the Potomac, drew his support less from a regional home base than from the states sympathetic to his peace candidacy: His home state of New Jersey and the border, slave states of Kentucky and Delaware. Abraham Lincoln carried everything else, including his own home state of Illinois.

What does all this history tell us about the 2020 election? Nothing earth-shaking. Small-state presidential candidates have a terrible track record, but elections are now more nationalized than ever, and Biden has been on the national stage for decades. He will almost certainly keep Delaware in the Democratic column, after the Democrats’ margin in the state dropped from 25 points in 2008 to 19 in 2012 to eleven in 2016.

Still, a geographic home base can help in a close election. Trump is essentially a lock to lose New York again, but his second home in Florida was a key state for him in both the primaries and the general election. Biden may yet show strength in Pennsylvania, one of the states most likely to decide the election, where at this writing he leads Trump by 3.8 points in the RealClearPolitics polling average. (He leads Trump by 6.5 points in the RCP national average.) But it is also entirely possible that Democrats will regret nominating a man whose home state is worth so few electoral votes.