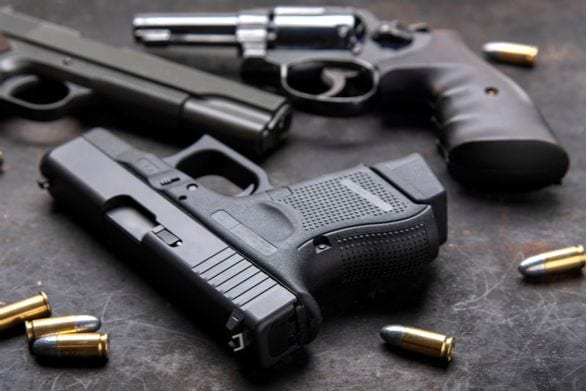 Bloomberg Explains Why He Needs Armed Protection–and You Don’t

At 12:45 in this video, an audience member asked Bloomberg this very reasonable question:

“How do you justify more gun control, when you have a large security detail that is likely equipped with the same firearms and magazines that you seek to ban the common citizen from owning? Does your life matter more than mine or my family’s or these people’s?”

Bloomberg began his answer this way:

“Look, I probably get fifty threats every week, OK, and some of them are real. It just happens when you’re the Mayor of New York City, where you’re very wealthy and campaigning for President of the United States, you get lots of threats. So, I have a security detail, I pay for it all myself, and um, they’re all retired police officers who are very well trained in firearms.”

But people who aren’t billionaires, or even millionaires, can’t afford their own cadre of retired law enforcement to go everywhere with them. We are our own security detail, and some of us are even as well trained in firearms as members of law enforcement. The very clear message from Bloomberg is that since he is important and wealthy, he should have the armed security of his choosing, but because the rest of us aren’t, we can dial 911 and wait.

In many states, ordinary law-abiding citizens can openly carry a firearm, conceal a firearm, or have a firearm in their home. Make no mistake, Bloomberg would like to eliminate these choices for those of us he might deem as less important than him.

As the Fox town hall continued, Bloomberg attempted to school the audience about what the Second Amendment is, asserting that he only wants to make sure that prohibited persons don’t have access to firearms. Prohibited persons include felons, minors, and those adjudicated as mentally ill. That sounds very moderate, but Bloomberg’s record tells a different story. In fact, in a recent Democratic Presidential debate, Bloomberg bragged about his work on gun control in over 20 states.

This year in Virginia, Bloomberg-backed legislators continue to work very hard to ban certain types of firearms and accessories. These bills go far beyond just keeping guns out of the hands of prohibited persons.

In 2013, in my own state of Colorado, Bloomberg was behind pushing a ban on firearm magazines that hold over 15-rounds, among other initiatives. These gun control laws led to the historic recall of two State Senators in the Centennial State. Coincidentally, due to my work on those recalls, I received a dozen threats to my life and safety. One of those threats led to a criminal conviction. Does Bloomberg believe that if I can’t afford private security I’m out of luck? Luckily, my state has not prohibited my ability to choose a firearm for my own self-defense.

In the United States, politicians are not kings, who are endowed with a birthright to tell us how to live our lives. We are all created equal to the politicians. Bloomberg chooses his self-defense. Those who cannot afford private security have the moral right to choose their own manner of self-defense.