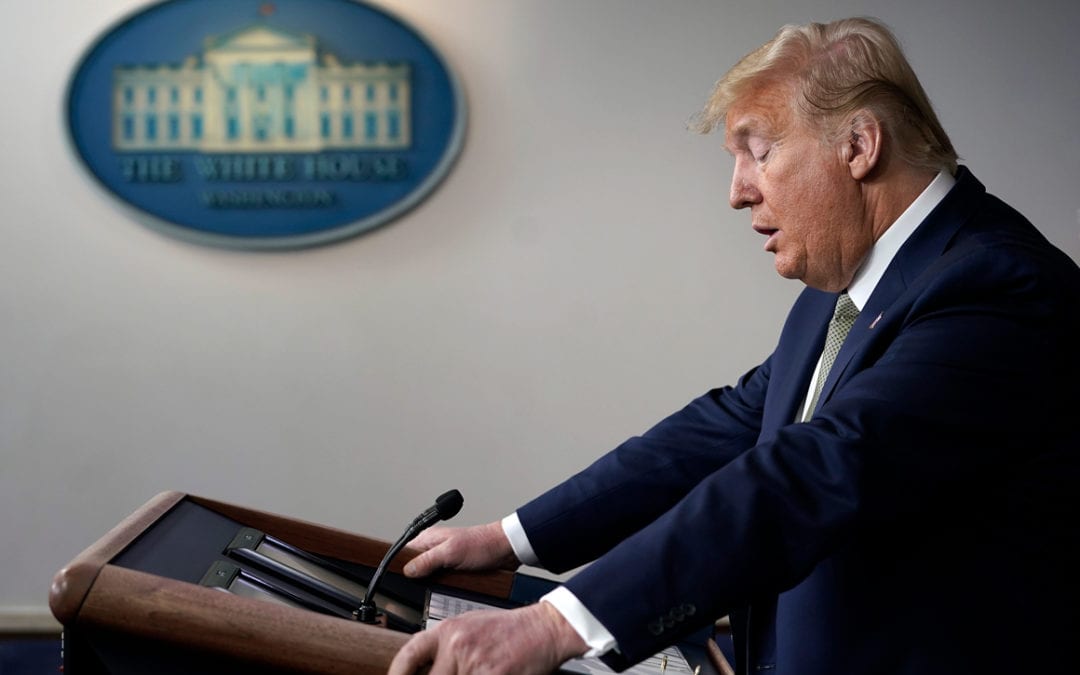 China had reported that there had been 440 cases and 17 deaths, a noticeable increase from the day before when there were only 300 cases and six deaths. Chinese officials are warning people to stay away from Wuhan, the province where the outbreak began.

Jan 30
“We think we have it very well under control. We have very little problem in this country at this moment — five. And those people are all recuperating successfully. But we’re working very closely with China and other countries, and we think it’s going to have a very good ending for it. So that I can assure you.”
—

The CDC confirmed the first person-to-person transmission in the United States. CDC Director Robert Redfield says “the immediate risk to the American public is low.”

Feb 24
“The Coronavirus is very much under control in the USA. … Stock market starting to look very good to me”
—

While Rush Limbaugh tells his listeners that the “coronavirus is the common cold, folks” the World Health Organization reports nearly 80,000 cases and 2,600 deaths. Meanwhile the Trump administration prepares an emergency funding request from Congress and public health labs pressure the FDA to allow homegrown tests , after problems with a diagnostic developed by CDC prevented its widespread rollout. The S&P, meanwhile, closed 3,225. It would drop nearly 10 percent that week.

FDA Commissioner Stephen Hahn says coronavirus will likely affect the nation’s medical supply chain. Nancy Messonnier, the director of the CDC’s National Center for Immunization and Respiratory Diseases says an outbreak is inevitable. “Disruption to everyday life might be severe,” she warns.

Feb 25
“We have contained this. I won’t say airtight, but pretty close to airtight. We have done a good job in the United States.”
—

That same day, CDC Director Robert Redfield said it would be “prudent to assume this pathogen will be with us for some time to come.”

Three days later, Tony Fauci, NIAID director, told CNN that that he was concerned that “as the next week or two or three go by, we’re going to see a lot more community-related cases.”

March 2
“We had a great meeting today with a lot of the great companies and they’re going to have vaccines, I think relatively soon.”
—

Fauci repeats that vaccines will take a year to 18 months.

March 6
“Anybody that needs a test, gets a test. They’re there. They have the tests. And the tests are beautiful.”
—

Vice President Mike Pence, the day before, said “we don’t have enough tests today to meet what we anticipate will be the demand going forward.”

Within the week, Trump canceled events in Colorado, Nevada and Wisconsin. Fauci recommended against large crowds.

Surgeon General Jerome Adams, that same day, warned that “this is likely going to get worse before it gets better.”

March 12
“It’s going to go away. … The United States, because of what I did and what the administration did with China, we have 32 deaths at this point … when you look at the kind of numbers that you’re seeing coming out of other countries, it’s pretty amazing when you think of it.”
—

That same day Pence said “we’ll have thousands of more cases,” Since Trump tweeted, the number of deaths have more than doubled.

The president’s prior tweet said “Failing Michigan Governor must work harder and be much more proactive. We are pushing her to get the job done.” The day before, he tweeted New York Gov. Andrew Cuomo “has to do more.”

The president said he has “always viewed it as very serious” and denied that his tone in recent days had changed. “I feel the tone is similar, but some people said it wasn’t,” he concluded.