Inside the 2,000 bed, multimillion dollar coronavirus hospital being built in the Colorado Convention Center 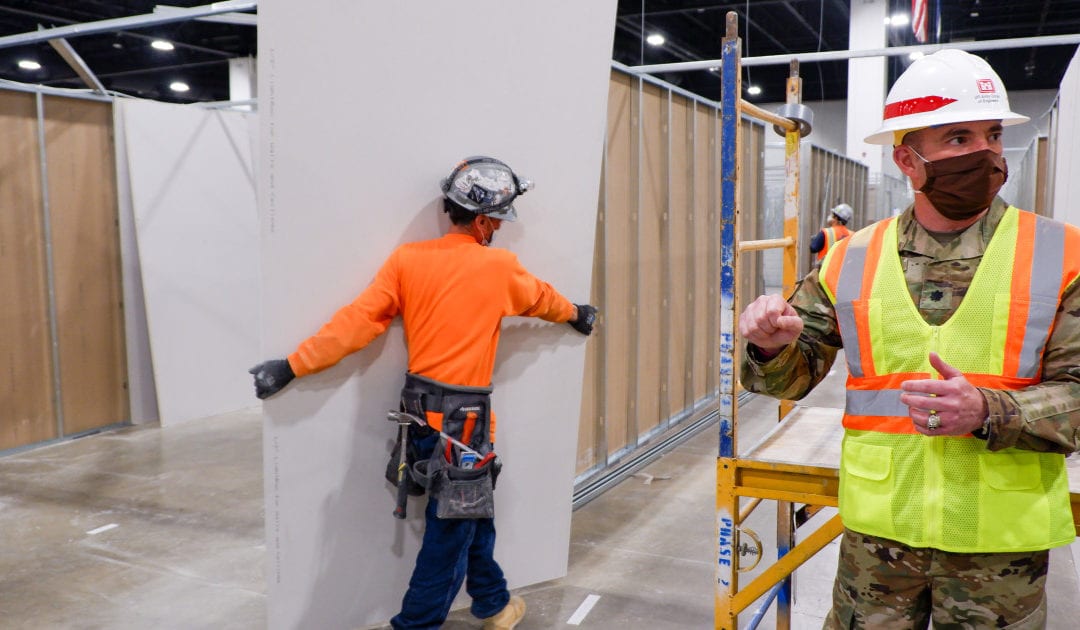 But it’s easy to detect the urgency behind the massive, multimillion dollar project underway inside the Colorado Convention Center in Denver, where state public health officials hope to have more than 2,000 hospital beds ready by the end of the month for people recovering from the new coronavirus.

“I don’t expect — and I don’t think any of us should expect in Colorado — that this facility should ever have to be full,” Gov. Jared Polis told reporters on Friday before they were given a tour of the construction site. “Unfortunately, I don’t expect that it will be completely empty.”

The virus is expected to cause its peak strain on the health care system in Colorado in May.

Work has been underway on the makeshift hospital for only about 48 hours, but construction crews — managed by the Army Corps of Engineers — have made a lot of progress.

What will be a complex of small rooms for people who are recovering from COVID-19, the disease caused by the coronavirus, has been framed as the convention center is transformed to a place where patients can go when they are able to leave critical care but aren’t well enough to go home.

The facility is expected to be partially operational by April 18 and ready to run at full steam by the end of the month.

Lt. Col. Larry Dale Caswell, Albuquerque district commander for the Army Corps of Engineers, said the recovery unit will be staffed by one nurse for every 20 patients. Those nurses will then have backup in the form of volunteers.

“You’ll get an idea of how vast this is going to be,” Caswell said, standing at the edge of complex of small rooms, roughly 10 feet by 10 feet, being built in rows as far as the eye can see.

Caswell said the convention center is perfect for a quick transformation because it’s designed for rapid change, typically hosting large trade shows, one after another, all year long.

The idea is to ease some of the burden of the coronavirus expected by Colorado hospitals by moving patients, when they are ready, to “step-down care.”

A similar field hospital is being constructed at The Ranch at the Larimer County Fairgrounds and Events Complex. It’s expected to have a capacity of about 1,000 beds and construction is slated to be finished by April 29.

The state says it has also signed letters of intent with St. Anthony North in Westminster, St. Mary-Corwin Medical Center in Pueblo and Western Slope Memory Care in Grand Junction to serve as alternative care sites. Those locations, however, will be able to handle more critically ill patients.

Hospitals are already working to build out their intensive-care bed capacity.

Polis said the work underway now is precisely why Coloradans need to continue staying at home and abiding by strict social distancing guidelines. If the virus peaks too soon, the health care system won’t be able to keep up.

“We are buying the time we need by staying at home to build this capacity,” he said.

Polis was asked about a story in The New York Times on Friday on how federal projections show coronavirus infections spiking if shelter-in-place or stay-at-home orders are lifted after only 30 days.

Colorado is under a statewide stay-at-home order, issued by Polis, until April 26. The mandate lifts just as the field hospital at the Colorado Convention Center and in Larimer County are set to be operational.

“We know that the virus will be with us after the stay-at-home is lifted and is likely to be a part of our future until there is a vaccine or a demonstrably effective treatment,” Polis said. “And so we have to figure out two things: How to function as a society and get back to work and enjoy life more in a sustainable way. We know that people — they’re not going to be able to be locked up in their homes for many months on end. That’s not realistic.”

Polis said the plan is to let people resume their normal lives as much as possible, but with restrictions. Large gatherings — like concerts and sporting events — are likely out of the question in the immediate future.

But retail stores may be able to open. Other businesses, too.

“People can get a haircut. The salons will be giving them — there may be one-person-at-a-time type protocols,” Polis said. “We’ve got to get back to that as soon as we can.”

Polis has referred to this post-stay-at-home period as the “new normal.”

“The virus will still be here,” he said. “People will still get it. The goal of this entire stay-at-home order is not to end the presence of COVID-19 here in Colorado or in America. That’s not realistic. No health official has said that that’s realistic for our country.”

Polis said people will get the virus in May, June and July. And some people will die from it.

“But it doesn’t exceed our health care capacity,” he said. “And those whose lives can be saved by being put on oxygen or — at that last step — ventilators, will have that fighting chance.”

Deaths and hospitalizations continue to rise

There are more than 6,500 confirmed cases of the virus, though officials warn there may be tens of thousands of people infected but who have not been tested because of a lack of resources.

A second person in their 20s has died from the disease. The first, reported earlier this week, was a 21-year-old Colorado Mesa University student.

Details on the second fatality in that cohort have not been release.