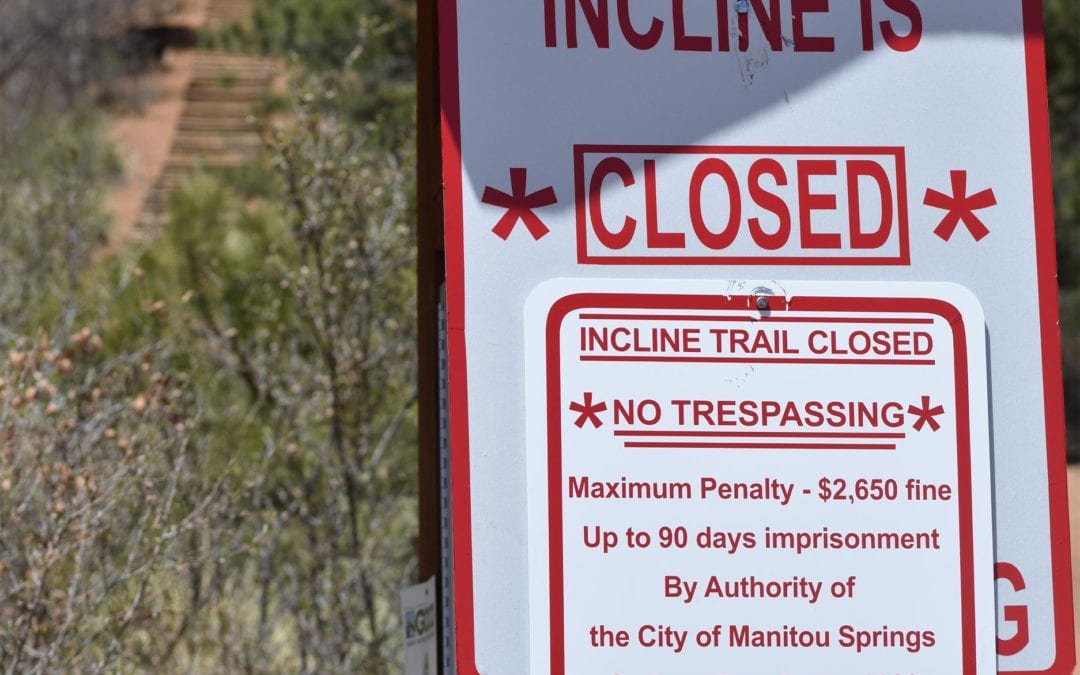 Officials of Manitou Springs and Colorado Springs were working this week to resolve an impasse over reopening of the Mount Manitou Incline.

Manitou Springs City Council voted March 17 to shut down the popular trail amid concerns that continued heavy use of the Incline could present a threat to public health and safety.

Colorado Springs officials responded with a stern warning that Manitou does not own any portion of the Incline and stated that Manitou should have consulted with them before taking action.

That controversy died down, but now the Manitou council has given its staff the go-ahead to continue working on a new plan that proposes reopening the Incline under a temporary management plan with a reservation system in place and suggests that a fee be charged.

Colorado Springs responded to the May 26 presentation the next day by issuing a statement that said the suggestions “go far beyond the scope of temporary, health and safety-related issues around COVID-19” and that “it is extremely premature to suggest that major changes, particularly under the guise of COVID-19 [occur], especially without agreement of the owners and a significant public process.

“The fee proposal as it is currently written especially goes beyond mitigating risk and would require a significant public process to evaluate a future usage fee and additional management options,” the statement said.

Both cities, CSU, the Forest Service and the volunteer Incline Friends group were meeting daily this week to try and resolve their differences.

They were looking for a way to reopen the Incline in a manner that would keep users safe, minimally impact Manitou Springs residents and benefit local businesses that have been affected by the closure.

Manitou Springs has been severely impacted by the Incline, which logs as many as 3,000 trips on its heaviest use days. Users include recreational hikers, elite athletes and teams of military personnel who train on the steep trail.

Ruxton Avenue, the narrow, two-lane street that leads up to the cog railway and Incline trailhead, is frequently clogged with vehicle and foot traffic, but the crush of people seeking to conquer the Incline also impacts Manitou’s limited parking, causes congestion downtown, requires periodic interventions by rescue personnel and poses environmental and sanitation problems.

Ruxton Avenue residents have long complained that users sometimes trespass on their property, block their driveways and awaken them before dawn with revving engines, loud vehicle radios and slamming car doors.

“This has been discussed for almost 10 years, to take a lot of the historical evidence and knowledge of the problems and try to figure out what would actually what a solution would actually look like,” Graham said. “Our quality of life has degraded over the last five or six years significantly, and a lot of it goes back to the Incline.”

Graham said that Manitou’s city attorney advised that the city has “good, substantial rights to close the Incline” because it posed a COVID-19 emergency situation but admits that “it would have been probably more gracious of us to talk to Colorado Springs first.” But he said he was baffled by the neighboring city’s response to the management plan proposal.

Graham said Grebenik and Chaney had been working with Kurt Schroeder, Colorado Springs parks manager, and had sent the city a five-page summary of the proposal before the May 26 council meeting.

Graham characterizes the plan that was presented to council as “a perspective on a difficult, complicated situation. … We made this jump conceptually to say that we need a fee to help pay for all this stuff [including a shuttle bus, free parking and enforcement and rescue services provided by Manitou], and we need a reservation system to regulate the traffic.”

The city could use software already in use at the pool, as well as pool staff, to set up and monitor a reservation system, Grebenik said.

2. reopening the Incline with COVID-19 guidelines with additional parking restrictions on Ruxton Avenue and the Barr Trail parking lot; or

3. reopening the Incline with an “interim active management plan” in place, to include a reservation system and potential fees of $5-$10 per user.

Council members unanimously indicated that they favored the third alternative and directed Grebenik and Chaney to continue working with Colorado Springs and the Forest Service to implement an interim, temporary plan.

“We were very supportive that they were heading toward some type of a parking reservation system that help reduce the numbers going up Ruxton and help manage the Incline use,” Palus said. “That’s what our understanding was — that they were tying it to the number of parking spaces. … That was not, unfortunately, the proposal that happened Tuesday night.”

Palus said she did receive the five-page summary of Manitou’s proposal but didn’t have an opportunity to look at it until the day of the council meeting.

She said she and Schroeder sat in on the online meeting as spectators; that was the first time she saw the detailed proposal.

Colorado Springs parks people knew that Manitou was interested in a fee and reservation system.

“However, we have been very clear that that’s a long-term scenario,” Palus said. In particular, “they have been very interested in monetizing, and they have been for many years, and we have said time and time again that unfortunately that has to go through a much more robust public process and that when we’re ready to do that, we would all do that together.”

She noted that Manitou has paid for a number of traffic and mobility studies that address the congestion on Ruxton Avenue and propose parking-related solutions.

“We support them wholeheartedly on any type of parking management strategies that they’d like to enforce, because that’s in their purview,” Palus said, particularly “a reservation system as it relates to the number of parking spaces.”

“I was like, ‘You have every right to charge for parking to try to minimize some of the usage.’ But monetizing a trail, that’s a tough one.”

She said the city also supports bringing the Incline back into operation.

“There are things that are specific to COVID where we can make modifications to our current operating plan,” she said. “But when it comes to a fee, that’s a whole different animal, and that is not COVID-related.”

Colorado Springs’ perspective on the Incline includes the whole corridor — the Barr Trail and the northern trail, a just-started project that will connect the Incline at about its midpoint to the Barr Trail, as well as Ruxton Avenue, Palus said.

She said she doesn’t think Manitou’s staff “quite understood the complexities of going through a management plan that not only involves the city of Colorado Springs and the Forest Service, our utilities division, and the municipality along with the friends groups and all the different participants that utilize those facilities would be part of that bigger process.”

It’s been difficult for Manitou to measure the effects of Incline use on Manitou businesses. But at least one business owner is directly concerned about how the reopening issue is resolved.

During the day, he rents out his 46 parking spaces to Incline and Barr trail hikers. At night, the lot is used for patrons of the chateau, which in normal times hosts dinner and a melodrama performance.

Ratterree charges $5 per car eight months out of the year and $10 during the summer high season. Incliners frequently use the lot, he said.

“They can go online or call me and make a reservation, and I will have a space for them,” he said. “We do annual passes so you get unlimited parking for a year.”

Ratterree shut down the lot and the theater on March 18, but reopened the lot when the statewide stay-at-home order was lifted. Since then, it’s been his only source of income.

“What little parking we are doing helps to pay the mortgage and keep the lights on and pay the utilities,” he said. “We’re not doing any shows; the theater probably won’t be open hardly at all this summer. So parking is all we’re going to have.”

Ratterree said a city official contacted him a couple of weeks ago and suggested that they would like to close all nonresident metered parking on Ruxton Avenue and possibly work with him on a parking solution that would involve his lot.

Ratterree said he wasn’t interested, but would consider shutting down his lot if the city would pay him $250,000 a year to compensate for his lost revenue.

He suggested that the city start charging for parking at the Hiawatha Gardens parking lot, where visitors were encouraged to park and catch a shuttle ride up Ruxton Avenue or into downtown Manitou.

Ratterree said he has tried to work with the city “in certain ways, but most of their solutions end up with us losing money. … We’re willing to help them as much as we can, just not to the detriment of the business.”

Ratterree and Bill Beagle, president of the board of the Incline Friends, agree that reopening the Incline would be beneficial to Manitou’s businesses.

“One thing that’s bothered me is the canard that Incliners don’t spend money in Manitou,” Beagle said. “We know that’s absolutely not true.”

Two years ago, Incline Friends spent two weekends at the base of the Incline asking people a variety of questions, including whether they patronized Manitou merchants.

“It was certainly unscientific, but people do,” he said. “I know I did when I would go do the Incline, I might stop to get a tank of gas on the way out of town. I might stop at the Loop and have a drink. I know that some of the merchants really value having Incliners come to the town.”

Beagle said Incline Friends has not taken an official position on a reservation system, but opposes a fee for use.

“We have offered to assist Manitou Springs by deploying volunteer social distancing ambassadors” to encourage compliance with measures such as limiting the number of people entering the Incline per hour, a statement issued by the Friends on May 28 said.

“One thing Incline Friends can’t do is broker a peace agreement” between the two cities, Beagle said.

Graham said the group, as well as Ratterree, will need to be a part of any long-term solution.

He said he talked with Colorado Springs Mayor John Suthers on May 27, the day after the management plan proposal, and has been meeting with other stakeholders daily.

“I think there’s a certain amount of tension right now between Manitou and Colorado Springs, but I don’t think that’s going to last,” Graham said. “I think we’re going to take a deep breath and then go back to the table and try to work this thing through.”