In honor of Earth Day, 50 reasons why we love Colorado outdoors 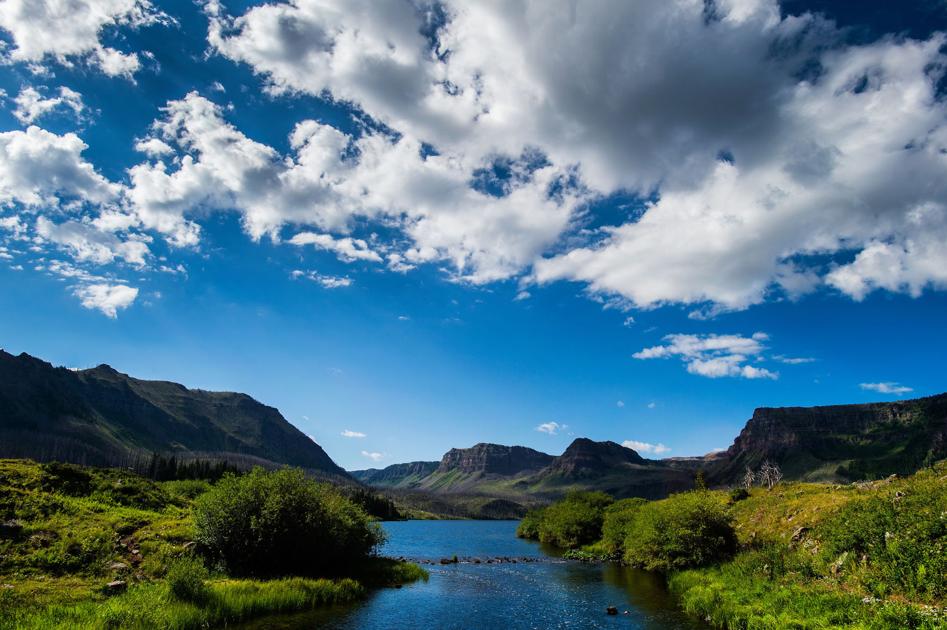 There are endless reasons to love Colorado’s outdoors. But with the 50th celebration of Earth Day set for Wednesday, we limited this list to that number, giving thanks to just some of our favorite gifts under the sun:

It’s a four-wheel-drive journey through mining history and natural paradise, with something new to behold at every bend of the rocky road stretching 65 miles: waterfalls, wildlife, wildflower-filled meadows and sweeping vistas of the San Juan Mountains. One need only decide on a launching point among Lake City, Ouray and Silverton.

From Browns and Bighorn Sheep canyons to the Royal Gorge, the Arkansas tours some of Colorado’s most rugged realms and offers some of the most exhilarating rapids in the region.

Late season wildflowers bloom in American Basin below the summit of 12,620-foot Cinnamon Pass on July 30, 2018. The basin is a popular spot during peak wildflower season and is home to one of the trailheads to 14,048-foot Handies Peak. (The Gazette, Christian Murdock)

Aspen groves Anyone from the Midwest or East Coast might miss the mix of orange and red foliage in the fall. But were they to go back, they’d surely miss the golden displays of the Rockies.

Bats of Orient Mine Your Colorado bucket list isn’t complete without a visit to this protected area in the San Luis Valley. Come dusk in the summertime, behold as the state’s biggest colony of Mexican free-tail bats takes flight.

The Gunnison River flows through Black Canyon of the Gunnison National Park near Montrose in December.

Black Canyon of the Gunnison We last visited this vertical world on the Western Slope in the winter to enjoy the snow-draped views and stunning silence. Not a bad time to go, considering visitation is growing here faster than any other national park in Colorado — and understandably so.

Bridal Veil Falls A postcard image is found in just about every direction you look in Telluride. But this might be the best: a silvery cascade streaming 365 feet from the wall of a box canyon.

Colorado National Monument Another gorgeous member of the Colorado Plateau, which also encompasses the Grand Canyon and Zion National Park. Rim Rock Drive is a trip through millennia of rock artistry. Pinnacles and spires jut from the Earth, a blend of sandstone red and orange with pinyon and juniper green — plus whatever hues sunrise and sunset cast upon the preserve.

The Crestones This set of jagged peaks tests the mettle of alpinists bold enough to seek them, especially Crestone Peak and Crestone Needle. More attainable fourteeners are Challenger Point and Kit Carson, with waterfall-fed Willow Lake serving as a lush, serene stop along the way.

A raft battles the Class IV Snaggletooth rapid on the Dolores River in June.

Dolores River — In the remote southwest corner of the state, the Dolores hems pristine sandstone cliffs, forests and deserts. A dam limits flows, making the opportunity to boat the river rare and all the more special.

Eagles Nest Wilderness One can spend a lifetime exploring these 133,000-plus acres, with every trip discovering more colorful meadows, sparkling lakes and spectacular peaks of the Gore Range.

Mount Elbert Colorado’s highest point must be paid respect. But we wouldn’t blame you for preferring its fourteener neighbor, Mount Massive, with a summit sitting a dozen feet lower.

Eldorado Canyon Another iconic rock climbing destination that for decades has been a rite of passage. Lesser talked about are the lovely trails in the state park.

A bull elk prepares to bugle as he makes his way around downtown Estes Park on Thursday October 11, 2018, in Estes Park, Colorado. (Dougal Brownlie, The Gazette)

Hunters are blessed with White River National Forest, home to one of North America’s biggest herds.

Garden of the Gods A nature sanctuary unlike any other, best visited without the tourist masses.

Grand Dyke There are dykes, the spine-like rock formations stretching across landscapes in Colorado and beyond. And then there’s the Grand Dyke, as this particular one near Crested Butte is called. Seen from Kebler Pass — a premier site for fall leaf viewing — this epic monolith scrapes the sky above a colorful canopy.

Grand Mesa Who says a mountain has to be pointy to be aesthetically pleasing? Grand Mesa, the world’s largest flat summit stretching western Colorado, makes a good argument.

Great Sand Dunes Just when you think the dune field surrounded by forests and snow-capped peaks can’t get any more bizarre, a natural wave pool forms over the sandy base during spring runoff at the national park.

Hanging Lake Let’s hope a new permitting system achieves its intent to conserve this dream-like destination. People still have to see it to believe it, but now they have to schedule a time.

Hot springs With all of the muscle-aching adventure we do, Colorado restores us with its geothermal waters.

Lakes of the Clouds

In Colorado Springs, we’re wise to make this our weekend escape. Accessed via the Rainbow and Swift Creek trails near Westcliffe, it’s a hard hike to these three lakes above 11,000 feet. They teem with trout and reflect the majesty of the Sangre de Cristo peaks.

This jewel in the Indian Peaks Wilderness isn’t often ascended; its craggy face is reserved for well-trained alpinists. Lone Eagle is typically admired by backpackers bound for the alpine lake that mirrors its regal beauty.

Lost Creek Wilderness In Colorado, we can go high to 14,000 feet or low to backcountry no less glorious. Take, for example, this wilderness area, the closest to Colorado Springs and Denver. The mosaic of foothills, streams and granite demands a multiday trek.

Maroon Bells We’ve all seen the pictures, but none can do justice.

Moose There’s a certain thrill in someone on the trail telling you there’s a moose ahead. We get our phones out for the photo to show off later, while also keeping our distance.

North Clear Creek Falls This cascade surprises along the Silver Thread Scenic Byway between Creede and Lake City, blasting 100 feet down a cliffside.

An ice climber works his way up a route in the Lower Bridge area of the Ouray Ice Park Sunday, Jan. 14, 2018, in the Uncompahgre Gorge on the south edge of town. The park, which features more than three vertical miles of ice and more than 200 identified routes, is the host of the 23rd annual Ouray Ice Festival beginning Thursday, Jan. 18 and running through Sunday, Jan. 21, 2018. The festival features climbing clinics, an outdoor gear expo and international climbing competitions. (The Gazette, Christian Murdock)

Ouray Ice Park Ouray, which calls itself the Switzerland of America for the soaring peaks surrounding the town’s box canyon, used to be dead in winter. Then the town started farming ice in a gorge. The result is this park that hosts an annual festival, attracting ice climbers near and far.

Paint Mines While our eyes look west to the mountains, the Paint Mines remind us not to forget the plains. This technicolor, geologic wonderland is an El Paso County gem.

Palisade peaches Every year we can’t wait to bite into the fruit from this Western Slope valley, where a combination of climate and longstanding family tradition creates the magical sweetness.

Pikas A trek above treeline is better with these squeaky, alpine-dwelling cuties.

Pikes Peak America’s Mountain gives newcomers a taste of 14,000 feet with its paved road, while the mountain’s most devoted explorers are granted a renewed sense of mystery with every trip to her far-reaching landscape.

Powder Whether we snag a season pass or take our business to the backcountry, we find Mother Nature gracious to our ski slopes.

Lake Pueblo The numbers at Colorado’s most-visited state park go to show how much a day on the water is appreciated. And in case you haven’t heard, the mountain biking is pretty darn good, too.

The Calvillo family harvests chile peppers in a field at Di Tomaso Farms in Pueblo in August.

The debate rages with New Mexico. But Coloradans stand by their chiles, raised in the southern fields under plentiful sunshine.

Rainbow trout They aren’t the biggest trout fished in Colorado. They aren’t even native, believed to have been introduced in the 1880s. But they are among the most stocked today, and that red stripe spotted in the shallows always signals a promising day.

Rattlesnake Arches While a certain national park in Utah greets unrelenting crowds, the country’s second-largest concentration of natural arches doesn’t get nearly the amount of visitors. And that concentration is here in Colorado, near Grand Junction. Nonlocals have to do their research to get to Rattlesnake Arches, not to mention the level of fitness required.

The Akiti Arch is perhaps the most impressive of the Rattlesnake Canyon Arches near Grand Junction. It is the second biggest collection of arches outside of Utah’s Arches National Park.

Red Rocks Amphitheatre Try as we might to create the ultimate concert venue with state-of-the-art technology, it’s hard to beat this one crafted by nature.

About the most tropical scene the West has to offer: a triple cascade tumbling from mossy walls into an emerald pool.

They always look like they’re smiling. Just as we do at the sight of them.

Rocky Mountain National Park Sure, the park’s main gateway from Estes Park deserves all the love. But as crowds get bigger, we might just prefer the other entry from Grand Lake, the charming town around the state’s largest, deepest natural body of water.

An example of a radial dike in the foreground in front of the Spanish Peaks on Thursday, February 22, 2018 . (Photo by Jerilee Bennett, The Gazette)

Rocks of Spanish Peaks country Next time you’re driving over La Veta Pass, take a moment to appreciate the outcrops that tend to get lost in the view dominated by the twin peaks. Geologists know the region to be world-class.

Royal Gorge Whether marveling from the famous bridge, from the whitewater below or from the expanding trail system above, the Royal Gorge always takes the breath away.

Sandhill cranes These majestic migrators briefly stop in the San Luis Valley every year, gracing us with their ancient calls and dances.

Shelf Road This imposing row of limestone near Cañon City is hailed as the birthplace of sport climbing.

Dylan Scott of Colorado Springs leads a group of riders Saturday, March 30, 2013, along Mary’s Loop in the Kokopelli area four miles west of downtown Fruita. The trails Kokopelli area above the Colorado River are similar to those found in Moab. (The Gazette, Christian Murdock)

Singletrack A nod to our favorite mountain biking base camps (Durango, Fruita, Steamboat Springs, to name a few) and the ones that have been steadily building out their trails (Cañon City, Del Norte, Gunnison, to name a few).

Mount Sneffels The centerpiece of its namesake wilderness, Sneffels is that sharp, 14,000-foot marvel looming in view, letting you know you’ve reached the great wilds of San Juan country.

South Platte River Responsible for many an angler’s best memories.

State Forest State Park Sprawling nearly 71,000 acres in northern Colorado, it’s by far our biggest state park, boasting also the highest elevations with alpine lakes aplenty plus the splendor of the Medicine Bow Mountains and Nokhu Crags. And did we mention moose?

Trappers Lake For a place tied to the origins of the Wilderness Act, it’s amazing how little you hear about Trappers Lake. Or maybe it’s not, considering the location, tucked deep within Flat Tops Wilderness somewhere between the little-known towns of Yampa and Meeker but not exactly close to either.

Summer is for columbine, lupine, Indian paintbrush and other multicolored flora. The other seasons are for dreaming of the vibrant return of Colorado’s wildflowers.