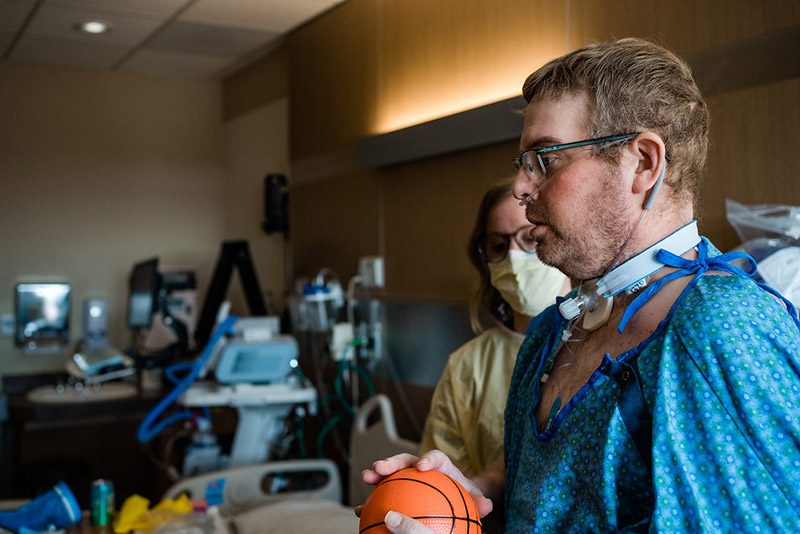 Monday, April 12, was a cool early spring day in Colorado. Under a pale blue sky, the world slowly warmed as it returned to life after a long winter. It was a fitting day for a man in the midst of his own hard-earned reawakening to leave the hospital.

Bryan Raymond, 37, rolled through the doors of UCHealth University of Colorado Hospital on the Anschutz Medical Campus more than 12 weeks after he arrived, clinging to life against a brutal attack of COVID-19. He came to UCH unable to breathe without machines. He now takes breaths on his own through a new set of lungs.

Bryan is the first person in Colorado to receive a double lung transplant after a COVID-19 illness. The successful surgery on March 6 made for a bold headline. But his own determined struggle, aided by many hands that supported him as he teetered on the edge of life and death, paints the full story of his survival.

His fight is far from over. He will spend the next three months recovering in temporary housing near the hospital with his wife, Trinity, while his medical team carefully monitors his health and helps rehabilitate his body, battered by COVID-19 and long stints on a breathing machine. His lung transplant surgeon, Dr. Robert Meguid, likes his chances.

“He has a tough hill to climb, but he has all the resources to succeed,” Meguid said. “He has every reason to do it. He is totally a fighter and a survivor.”

Support near and far for life-saving care

The wellsprings of Bryan’s strength flow some 750 miles away in Malta, a small town on the high plains of northeastern Montana, about an hour from the Canadian border. His four kids, ages 3, 5, 11 and 15, are there, anxiously waiting to see their dad after months of absence. Trinity’s parents watch over them, supported by meals and assistance from neighbors. The Malta community cheers Bryan and his family on with fundraisers and notes of encouragement as well as prayers that bolster their faith.

Bryan’s story is also a testament to the staunch medical support he and Trinity received in Montana and Colorado. It reveals how much effort, skill and determination sustaining a single life requires.

As is true for so many, COVID-19 invaded the Raymonds’ lives without warning. Bryan worked for Phillips County, blading gravel roads, while Trinity taught fourth grade at Malta Elementary School. In their spare time they liked to help out on the ranch Trinity’s parents own. He officiated basketball games, chasing high school players up and down the court. The kids raised animals for 4-H and took them to the fair. The whole family enjoyed camping beneath the wide Montana sky.

But on Nov. 30, 2020, their world changed. Bryan tested positive for COVID-19. He had a fever and shortness of breath. Trinity recalled the first few days of his illness as “not too bad,” but on Dec. 9, his oxygen levels plunged into the mid-70s (90 or above is normal). Providers at the Phillips County Hospital emergency room quickly sent him by air to Billings Clinic Hospital, about 200 miles south. He promptly went to intensive care.

A week later, his condition deteriorated to the point that he needed a ventilator to breathe. The same day, staff told Trinity that his failing lungs needed a higher level of mechanical support from ECMO (extracorporeal membrane oxygenation), a term she’d never heard. Providers inserted a cannula into a vein in his leg, through which blood flowed to a machine that oxygenated it and returned it to his body through another cannula in his neck. ECMO, his providers hoped, would allow his COVID-ravaged lungs to rest and recover.

Even on ECMO, however, his lungs did not improve. The Billings team wanted to transfer him to another hospital for even more intensive care, but a bed did not open up until Jan. 7, 2021, when UCH accepted his transfer. He flew the next day to Colorado, desperately ill.

Free of COVID before being listed for transplant

Bryan faced a stark challenge. He would need a lung transplant to live, but before he could be listed, he had to recover sufficiently to survive the surgery. Yet he still tested positive for COVID-19 and his body was deconditioned from three weeks lying in a bed, sedated and connected to the ECMO machine.

He needed physical therapy, but that required surgery to reposition his ECMO cannulas, said Dr. Muhammad Aftab, assistant professor of Cardiothoracic Surgery with the University of Colorado School of Medicine.

“We wanted him to walk. He was losing muscle mass,” Aftab said. Without discontinuing ECMO support, Aftab and his team removed the cannula from his leg and repositioned it as the second one in his neck so that he would be able eventually to move. The ECMO team also put Bryan on dual oxygenators to maximize support for his lungs, Aftab said.

With the newly positioned cannulas, Bryan could move – at least in theory. But the goal of being able to walk on his own seemed impossibly distant. He was in a COVID-19 isolation room, drifting in a fog of sedation. Trinity could communicate with him – or attempt to – only through FaceTime. It would not be until Feb. 6 that he finally tested negative for COVID-19 and moved to the Cardiothoracic Intensive Care Unit (CTICU).

Yet even in the isolation unit, physical therapists began the slow process of helping Bryan’s depleted muscles regain strength with range-of-motion exercises. In the CTICU, the work continued. He inched from sitting up, to sitting on the edge of the bed, to standing with assistance, to edging to a chair and back.

“It took multiple weeks of tiny steps to get that strength back up,” Trinity said.

The arduous recovery was complicated by other factors. Bryan remained on ECMO and was closely managed by Aftab along with a team of intensive care specialists, nurses trained on ECMO, and perfusionists, who manage the ECMO machine. His sedation was difficult to manage, recalled Dr. Tim Tran, an anesthesiologist who was a member of his CTICU team. With less sedation, it was easier for Bryan to reengage with the world, but weaning him safely was a delicate task.

“Every time we tried to lighten his sedation, he would cough, which would reduce the ECMO flow,” Tran recalled. “Then we would have to re-sedate. It was hard to find a happy spot.”

Under the watchful eyes of nurses, physical therapists, cardiothoracic surgeons, pulmonologists, intensive care specialists and many others, Bryan slowly edged towards the goal set by Dr. Alice Gray, director of Lung Transplant Pulmonology at UCHealth. It was simple but daunting. He would have to be able to walk on his own before he could be listed to receive donor organs.

“Essentially all our effort was to prepare him for that,” Aftab said. “It was non-stop work for two months.”

Bryan achieved that goal on Feb. 26 after he twice walked about 250 feet, unassisted. He didn’t have to manufacture the motivation to do it.

“I’m kind of one sometimes that when I get challenged, I make sure I push hard to meet or beat that challenge,” he said. “This was life or death, honestly. It was walk and get your lungs or not walk and not get on the transplant list.”

About a week after he met the requirement, the UCHealth transplant team procured a pair of donor lungs, which Meguid successfully transplanted in a lengthy procedure March 6. Meguid emphasized he was again but one member of a large support team, including chief thoracic surgery fellow Dr. Neil Venardos.

Both Bryan and Trinity are quick to note the team’s unseen, but most vital member: the donor who supplied the lifesaving lungs.

“It’s a hard reality to come to the fact that somebody had to pass away in order for my husband to live,” Trinity said. “Somebody had to go through something horrible. It’s something you never wish on anybody. At the same time you are wishing for those lungs.”

“This has opened our eyes so much more to truly relying on donors,” she said.

The transplant surgery was just one milestone on a long and still unwinding road. Bryan remained on ECMO during the procedure and for five days following. The CTICU team gradually decreased the support to ensure his lungs could function without it, Tran said.

“It was a scary day when they took out the cannulas,” Trinity said. “But the team knew what they were doing.”

A new set of lungs doesn’t mean instant recovery. After weeks on ECMO, Bryan lost the muscle strength needed to take deep breaths. His bout with COVID-19 had shrunken his old lungs and his chest cavity with it. He needs long practice on breathing techniques to recondition his muscles and expand his new lungs, along with the chest cavity.

The day of his COVID-19 diagnosis, Bryan weighed 245 pounds. A little more than four months later, the disease and 12 weeks on ECMO had shaved his weight to 175. Weeks of work to prepare for surgery led to more rounds of hard work, this time to rehabilitate: 75 to 90 minutes a day each for physical and occupational therapy, along with some speech-language therapy.

“I’m learning to get up stairs again, step over a curb, get into a car, shower, be able to stand up and cook,” he said. “You have to train yourself to do all that again.”

Meanwhile, the Raymonds took classes from the hospital’s transplant coordinators to prepare for post-transplant life. That includes managing a strict medication regimen, watching for signs of organ rejection, guarding against bacterial infection and more. For a year after they complete the three-month monitoring period, they will have to make the long trip from Montana back to UCH every month for checkups.

For all the changes and challenges, they feel nothing but gratitude for the many providers at UCH who continue to help them through their ordeal.

“There have been so many teams at this hospital that have helped so much,” Trinity said, from physicians, nurses, physical therapists, occupational therapists and many more to the custodial staff member who noticed a change in Bryan one day and alerted Trinity to it.

“The CTICU staff became pretty much family to us,” she said.

Now out of the hospital, Bryan toils toward his next big payoff: reuniting with his children, who have been without him ever since he fell ill.

“I can’t describe how hard this has been on our kids,” Trinity said.

Aftab said that despite his devastating illness, Bryan had crucial factors working in his favor: he was young, active and healthy, with no underlying medical problems except well-controlled multiple sclerosis.

“He was also determined to recover, with a very supportive family who helped us help him,” Aftab said.

The ECMO team also had the prior experience of caring for more than three dozen COVID-19 cases the past year, he noted. That experience yielded many clinical lessons, he added, but the most fundamental could be applied to patients like Bryan and his family.

“We’ve learned to never give up and to fight hard every day,” Aftab said. “Let’s be optimistic as well as realistic and be prepared for setbacks because recovery will not be smooth sailing. Persistence is extremely important.”